From the smoggy hills of Southern California my cousin's Chevy Malibu carried us into the inferno of Nevada. Unseasonably hot, the dashboard thermometer registered 109 degrees F. From the high way Las Vegas was as inviting as Phoenix was, slightly more built up with all the casinos but spread out to the red foot hills in sprawling suburbs of hot black pavement. We pushed through deciding not to test our luck in the slot machines and made it to Utah at sundown.

The canyons of Zion National Park were dark by the time we were headed up the winding road to the park hotel. My uncle had reserved a cabin, of which I pictured a rugged log hut, at the hotel for the night. It turned out to be a hotel room built out of logs with carpet and running water. I immediately got the impression that we would be road tripping in some semblance of luxury for the week, I wasn't one to complain about that. As the moon rose and arced over the canyon wall the bottom filled with silver light which highlighted the fibrous seedlings of dogwood trees sifting down through the air. It looked like snow.

Early the next morning we rose to beat the heat and the crowds to the top of our destination, Angels Landing. My uncle had attempted the summit, a 1488 foot ascent up a very narrow trail, with my cousin who at the time was but a small lad. He made the safe decision and decided to stop at the lookout where the trail runs up a ridge where footing gets to restricted to a mere two or three feet of rock with thousand foot cliffs on either side. The National Park Service fitted chains and stanchions in these spots to decrease the number of unplanned rapid descents. 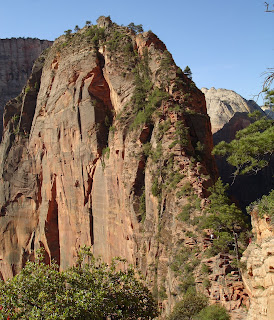 As it turned out, my primary purpose in accompanying my uncle on this road trip was to provide him with a witness in case he too succumbed to gravity on this climb. Once we made it to the top of Angel's Landing though we both realized how much of the trepidation of setting out across the ridge was mental. As long as you watched where you put your feet, kept a hand for the chains, and didn't go too fast as a boyscout had made the mistake of doing once, than it wasn't nearly as bad as it looked. The worst part was going back down around nine thirty in the morning and facing the swarms of fanny packed tourists headed up in the rising heat. It became necessary to fend off large groups so the people descending from the more precarious parts could do so safely and make room for the upward bound groups.

I highly recommend this park to anyone passing along the southern border of Utah. Unfortunately, not having gotten to see the Grand Canyon I can't compare but some have said that Zion canyon is naturally more splendid than the G.C., just not as massive. You be the judge. 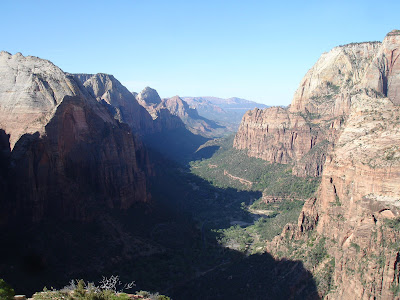