It is a telling thing when the merchant fleet of a maritime nation is as out dated as ours here in the states. Ships are being built all of the world with gusto but here in the USA our deep sea fleet is getting older and only slowly being replaced by new builds. The following is my experience on old ships.

In my first five years of sailing in the United States Merchant Marine as a junior and more recently as senior officer in the deck department, I have worked on three commercial ships. Two were tankers and the most recent a Roll On / Roll Off vessel. Their suboptimal condition resulting from long hard years at sea has had a formative influence on my career so far.

The first ship was a Suez Max tanker of 136,000 DWT. She had been built by Mitsui shipbuilding of Japan in 1974 making her 8 years my senior. Of the three ships she had been cared for the best, a testament to her 25 years sailing under the American ensign. On an interesting side note, and as a dating method she was featured in the original film King Kong as the giant apes' transport to NYC.

Unfortunately for me her days of running Alaskan North Slope crude oil abruptly came to an end shortly after I had joined her. My first voyage became her last as we sailed west from the United States to the scrapping yards of Asia Minor. It wasn't all bad though. Being an older ship she had been built large. Large accommodations, large officers mess, large pool. And the company was top notch providing as much in the way of diversion and entertainment on board as possible. An important thing for a voyage to Singapore that lasted 24 days. 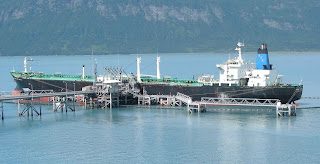 The second ship was a chemical tanker of 48,075 DWT. Having been built just one year shy of my first birthday she was slightly younger but her age showed in a multitude of rust, stress cracks, and wasted deck piping.The sheer amount of cargo piping and headers for the 43 segregated cargo tanks created a maze of steel running down the entire cargo block.

Like the crude oil tanker this ship was also operated by an American oil major for most of her life. Only recently had she been sold and it soon became obvious to her new unionized crew that the former owner had been fiscally conservative at her ship yards opting out of any large life span lengthening expenditures.This lack of maintenance on a very specialized ship led to a hazardous situation from an operators point of view. During my six months on board split between two hitches, I remember watching the cargo control board and having neither the S&J nor the less reliable back up float gauge correspond with the MMC reading during critical cargo operations. 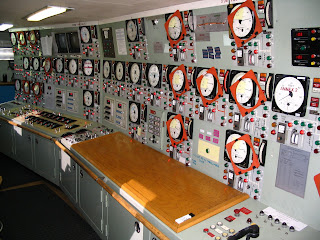 *As a side note for those to never set foot on a tanker - when moving a liquid cargo on or off a ship several methods are available for accounting for the amount of product in a cargo tank. Radar systems are among the more modern and accurate but on my older ship a spring loaded tape with a float resting on the liquids surface would send an analog signal to a needle gauge in the cargo control room. To back this up was another float system but this was much less accurate. The safest and surest measure was to have the Able Bodied seaman standing by at the tanks ullage cap with a hermetic sounding tape or MMC. 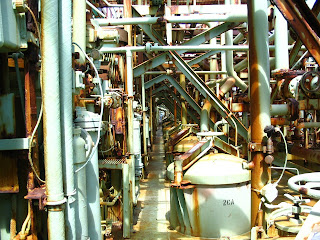 Not a big deal if you are topping off a product tanker but when simultaneously loading and discharging multiple products with only two or three working MMCs and three crew on deck it was difficult to keep accurate flow rates without making the crew do laps around the 600 foot ship all night long. But doing laps, and abusing a few cadets along the way was the only way to get the job done.

It was during my first trip on the chemical tanker that I realized how the ship was as old as most of the officers I was working with. It was evident in the look of amazement a vetting inspectors showed the Captain when he saw the crew's training synopsis record. The vetting inspector (A third party hired to evaluate the quality of the ships operation in minute detail) was a Master Mariner from India with decades of experience on similar ships. He was astounded because at the time the oldest member of the deck department, the Captain, was a mere 28 years. The Chief Mate was 27, and the junior officers including myself between 23 and 26. Our cumulative experience on this ship didn't add up to what was normally encountered in sea time and experience for a chemical tanker's Captain. We still passed the vetting, barely.

After two trips of wrestling with inadequate gauges, bursting pipes, and leaking low point drains along with the pleasure of working with naphtha, para xylene, methyl ethyl ketone, and a host of other petrochemicals I found myself looking for a different and hopefully newer place of employment. As luck would have it I found a fleet of car carriers that include several recent new builds trading internationally. I was elated to be joining a different ship and in my naivety thought how wonderful it would be to worry no more about oil leaks, cargo spills, and carcinogens.

When I joined my new home in the port of Houston I was not excited to find out that I had joined the oldest ship in the fleet and probably one of the oldest Roll On / Roll Off ships afloat. As I would learn, this particular vessel was a prototype for the modern day car carriers in world wide service. She was designed with hydraulically lifted decks maximizing cargo flexibility. This was a new approach in the 1970s to moving mechanized and rolling cargoes. She would be used in trade routes all over the world, most interestingly carrying paper products from the Pacific Northwest, including rough timber to Japan in the early 1980's.

Much like my last ship she too had seen several years of neglect and the problems were compiling quickly when a new operations company had taken over. The hundreds of hydraulic cylinders that moved the lifting decks up and down and secured them in place were leaking profusely. It took the crew two years to stem the flow and keep the oil from damaging cargo.

The mooring winches forward would frequently blow out putting hydraulic oil onto the fore deck and nearly over the side on several occasions. Miracle red hand patches kept us calling on our ports without delay. The accommodations would rain inside on the engineers quarters any time there was rain outside. The bridge and engine room had issues I'll decline to mention in this forum. 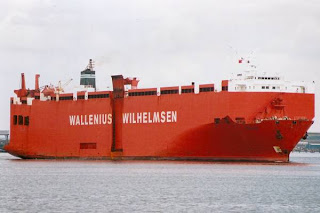 re-flagged back to her original Norwegian colors. I with the rest of the crew were somewhat relieved to pass on her mountain of issues to a larger crew with a ship yard in her near future.

For several reasons the United States Merchant Marine operates some of the oldest ships in the world. I for one look with envy upon the brand new ships I see in ports all over the world. I peer through my binoculars sizing up all the differences between what was slid down the ways three decades ago and what are being built today.

I always am reading about new ships have ergonomically minded bridges with enclosed wings, 360 degree visibility, and integrated chart systems. As so many of us who work these older ships know, as long as we are sailing deep sea we may not see such brand new things for quite some time. For me the problem solving, maintenance, and work load of older ships is a source of pride, but it would be nice to keep ahead of the rust for once. Crews of 18 can only do so much in a day at sea.

Lastly I should mention another vessel I had the pleasure of working on for a short stint. In between college semester I was able to get a mates job on a schooner in New England. This vessel was over a century old. One hundred and sixteen years to be exact. She was a two masted schooner, originally used as an oyster scow on the Chesapeake bay and eventually left to rot on the shore. She was salvaged and refit in Rockland Maine thirty years ago to join the growing number of Windjammers along the coast. This, the oldest ship in the passenger fleet, was home to some of my fondest working memories. So not all things old are a total pain in the sailor's ass. Just the ones that are neglected.
Posted by Deep Water Sailor at 10:00

Email ThisBlogThis!Share to TwitterShare to FacebookShare to Pinterest
Labels: Ships