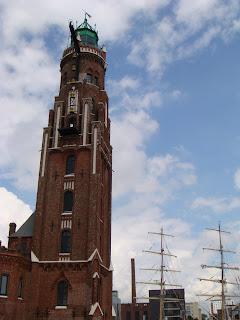 It is our third day in the riverside port of Bremerhaven Germany. Our inbound cargo was discharged on Friday making room for a large load of Mercedes Benz, BMW, Land Rover, and House Hold Goods that will begin at 0600 this morning. The labor situation for today does not bode well for an on time departure around midnight. Not only does it look like there will not be enough drivers to get the vehicles onboard in time but Germany lost to Spain by a lone goal so the pace of the disappointed and hung over Bermerhoovians will probably be slow.

The landscape here around the river delta is flat. The river is very wide with large mudflats and wetlands. The skyline is dotted with huge wind turbines that you can see silhouetted even at night with the never ending semi twilight of dawn. We are at 53.5 degrees north latitude, which is as far north as Labrador so the sun’s day is long in the summer. The city has retained some of its old architecture among its modern shopping and business district including a brick signal station erected in 1854.

I was glad to meet some friendly Germans in town yesterday. When I was last in Europe I had a day to visit a small town in Breven Belgium and the reception of an American in their midst was not very warm. With the exception of three women working in a butcher’s shop that were nice enough to recommend a restaurant and enquire about how we had ended up in their little town, the Belgians were outright rude. It was a different story today though which is nice in a port this ship visits once a month with time to go up the street.

The first stop after canvassing the down town was a sailor’s bar replete with black and white photographs of the port in the days of sail. I made the mistake of ordering a Heineken bottle in a bar full of Germans and received some epithet of disgust from the bar tender. After embarrassing my self in front of the locals I ordered three of the only beer they stocked in bottle or draft, Becks which is brewed nearby in Bremen. Apparently Dutch beers aren’t very popular in this neck of the woods.

From the bar we walked down to the harbor locks and observed the Boson of the Dar Mlodziey, the Polish training ship, instructing a mainmast full of green cadets how to bend on the lower topsail to the yard they were nervously leaning over. The town was swarmed with older Polish Cadets who had the day off. It appeared that the ship was just beginning its summer program having probably motored into port with no sails in her rigging. 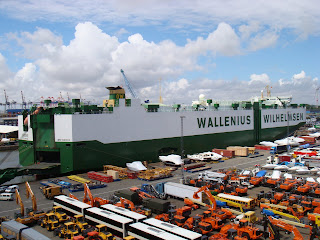 Bremerhaven is a city that appears to be closely tied with its port. The longest (Not to be confused with largest) container terminal in the world is situated here on the Weser River measuring in at 4.8 kilometers. Something the pilot proudly pointed out on our way in. The Ro/Ro port or Autokaje is accessed by a lock allowing the ships to lie alongside without regard to the fluctuations of the river like the container ships must. This is great when you must have a ramp lowered to work cargo and is a feature in three of the four ports we call in Europe.
(This is a ship of our same class probably just a few years younger than our own, lovely)

In the last three days I would guess there have been close to fifteen car carriers that have been berthed in the harbor close to us. That is a lot of tonnage loading and unloading cars, busses, boats, and heavy equipment all day long. The quay here is packed end to end with rolling stock. The car capacity of the terminal is at 60,000 cars that are stacked on top of each other in four story car garages. The port must be a huge employer in a country with very high unemployment. I’ve been told that unlike long shoring unions in the United States, it is very easy to get fired here with so many applicants waiting to take the next open spot. 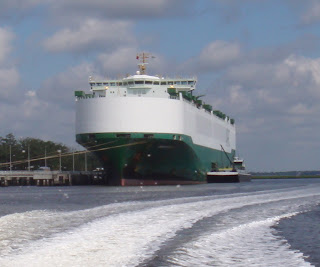 On the way back to the ship I tried to get online and call my girl from the German Seaman’s Mission. Unfortunately they were throwing an all out summertime extravaganza after they had driven the bus around the port picking up as many of the seafarer’s as they could. There were probably 150 sailors, 90% from either India or the Philippines getting their drunk on. The phone booths and computers were packed and when I did finally get online the keyboard was German and I couldn’t write an A with out the umlaut. I got frustrated with that and finally got a call through to the states but couldn’t hear a thing even after hiding in the very empty chapel with my bottle of Hefwiezen. After a few frustrating minutes of trying to relate why it was so loud over the phone I gave up, said goodbye and quickly extricated myself from the Seaman’s Mission. I returned to the ship very tired but happy I had gotten to see a little of the country I just spent the last fourteen days sailing to.

Naturally not everything went smoothly for all hands. One crew member was almost repatriated for health reasons, another robbed and a third beat up. Alcohol and shady parts of town were to blame for two of the three incidents. 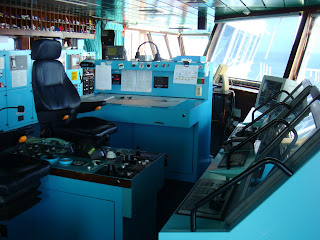 I made it back to the Seaman's Mission in port by sacrificing a little more sleep to get these posted. The ship is seen docked in Brunswick Georgia and to the right is the picture of the pilot/co-pilot set up we have on the bridge. The Captain brings this ship into port without a helmsman preferring to have the mate, himself, or the pilot steer if they are familiar with the EMRI auto pilot system. I've noticed that most pilots working ports that are frequented by these types of ships are very familiar with the EMRI. There is also a picture of the centerline gyro repeater and the unrestricted view provided by a well designed bridge. Somewhat of a new concept to me. Lovely. 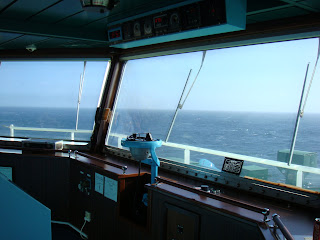