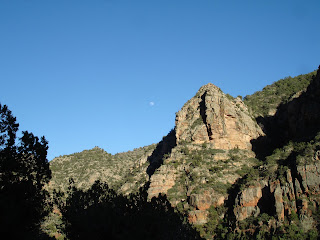 Having made it safely to Sky Harbor on one tank of jet fuel I found myself in the desert metropolis of Phoenix Arizona. My initial reaction to Phoenix strongly aligns with my sentiments for Southern Florida. It makes as much sense to build a city in the middle of an inferno as it does to build one on a narrow strip of sand and limestone abutting the everglades. Phoenix like Miami is a city of convenience. Air conditioning, massive amounts on concrete and pavement, and nature defying engineering allow millions of people to inhabit both cities. In Miami there is too much water, it is held back by levies and drained out every time a tropical deluge floods the streets. In Phoenix there is not enough water so it is scavenged off rivers and aquifers from very far away.

With these things on my mind I spent the day walking the streets of Phoenix waiting for my second grade study buddy to drive down from Flagstaff and pick me up. I spent an hour in a used book store with an impressive selection of historical and maritime books on it's dusty shelves. The proprietor, a grizzly old man sat with his back to a row of books stroking his grizzly old cat. His wife pointed me towards the Heard museum of Native American history downtown which I headed to next after making my obligatory purchase of a 1942 ship construction text I had never seen before.

After discovering the many tribes that once inhabited the Arizona red rock in force and a few ancient specimens of their woven sandals I made my way back to the bus route dodging clouds heavy with rain, a meteorological phenomena that took me by surprise. My friend showed up finally and after taking every wrong exit on the way to the airport we picked up another high school buddy and headed up the long road to Flagstaff.

At this point I had been awake for about 36 hours. Being practiced in sleep deprivation I was still functioning rather well until we began climbing from Phoenix's moderate 1000 Ft. elevation to Flagstaff's 7000 Ft. elevation. Being born and raised at sea level and having only once before been up a mountain above the 6000 footers of New England I was floored by the thinner air at Arizona's ceiling. I was light headed and dizzy with a creeping headache. I wanted to get out and start running to see how long I could go before falling over. I quickly began to drift off to sleep wondering if I would suffer from altitude sickness and wake up snow blind.

A few days later I would re-read "Into Thin Air" and realize that base camp for everest starts at 17,000 feet! Ten thousand feet above me and my headache in Flagstaff. This humbled my weak lungs and made me want to start road biking at higher altitudes.

After two days in Flagstaff I hardly noticed the 6000 foot difference any longer. We spent one day in Sedona several thousand feet below flagstaff hiking in the red rock. This was my first real day in a desert in the Western Hemisphere. I have seen the Sinai and Arabian peninsulas but they looked like barren wastes compared to the stunningly beautiful Arizona desert. The spires of rock, cactus, yucca, and clear canyon floor creeks were very exciting. I wanted to hike out there for days.

After departing Arizona we spent one night in the San Bernadino Mountains high above San Diego sleeping underneath a nearly full moon with little worry of rain or morning dew. The camp sites were empty and the air very still. My travel buddies had intelligently packed a Coleman cook stove, there was no wood for burning, so we fried steaks and potatoes to go with our Budweiser. Coyotes woke my friends in the middle of the night but I slept through it.

The following day we arrived in San Diego California where my cross country road trip with an uncle would start only minutes after separating with my chums who would continue on their quest of good times up the Pacific Coast.
Posted by Deep Water Sailor at 08:08