It is the thirteenth day of the repair and it’s looking like another week or so until we’ve completed the job. Normally when I’ve been at sea for more than two weeks it means that port is close ahead. In this case the only reason we need to go to port is for provisions and crew changes. Otherwise our work lies beneath the water and in some instances very far from land.

This job, like the last repair, is in shallow water and close to land. It’s also right in one of the busiest shipping lanes in the world which adds an element of suspense every time a fully loaded Very Large Crude Carrier takes her time in deciding which side of us to pass on. Despite the number of ships current rode off she southern shores of Malaysia there are ten times as many ships still transiting the strait, plenty of those are in ballast or lightly loaded, but there is still a lot of traffic here.

After signing on this ship as a third mate I quickly realized that I was at the bottom of a very steep learning curve. Despite five years of working experience on liquid and dry cargo vessels my knowledge base is solely being used for safety inspections and security calls on the VHF radio. All of the responsibility and decisions regarding the cable repair is left to the master, chief mate and first officer under the guidance of the Engineer In Charge, a company employee.

This work relationship is completely alien to me. Coming from a traditional merchant cargo ship not being allowed to participate in the repair operations has made me feel a new level of uselessness. This isn’t what I was hoping for but I have to take it with a little salt. While repairing cable isn’t that technically difficult, unless you’re a joiner-splicer, experience is the number one factor to doing it successfully. The combined experience of the upper officers making the decisions on this repair is over 100 years and it shows.

Therefore I’ve come to realize that all I need to do is shut up and stick around and eventually I’ll be released from the office, the fully enclosed bridge, and be allowed to work in the field, that would be the aft deck where all the action happens. And of course, being at the bottom of the food chain means I have a lot of things to learn which for me is always a positive in the workplace.

Another positive. We have a barber on board. One of the Filipino crew will give anyone a lunch break mop chop and doesn’t even expect payment. Of course all the officers who use his skilled services pay the going rate but it’s worth double that given the time it saved me from having to go ashore to find a barber who may or may not speak English.

The barber, who’s nickname I haven’t learned yet (Every Filipino on board has a nickname), started cutting hair on cruise ships and found employment through an offshore crewing agency in the Philippines on this ship. He’s now moved out of the stewards department where he started here and is an Ordinary Seaman still practicing, as he put it, his “Main vocation”.

A view of some aft deck Action with cable on grapnel. 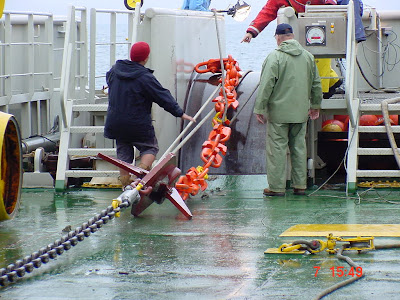