A cable job in shallow water always requires a permit, or two, or in our case three. When the job involves a repair or installation in the middle of the ocean it’s usually not a problem. No one owns the abysmal plain, unless of course there’s mineral wealth down there, but coastal waters are a different story.
Malaysia, Singapore and Indonesia all have territorial claims over the waters that make up the Singapore and Malacca Straits. These invisible borders are guarded secrets and some are contested betwixt the nations. Therefore they are not drawn on our navigational charts which means that when we submit a proposed work area for the necessary permits we do not know which nation has a claim to those waters. And since one of the three nations is infamous for taking weeks and weeks to process work permits the company often asks the navigation second mate to redraw the work area trying to tailor it around that particular maritime nation’s waters. And so we wait…

The last job ended about a week ago with a surprise. We had finished the final splice of the cable and had successfully surveyed the entirety of the work area. Not 24 hours before leaving the “Cable grounds” did the Engineer In Charge receive a phone call informing the ship that a fault had been detected a little further down the line. We investigated by surveying that area with the Remote Operated Vehicle or bug and found that the cable had been devastated by an anchor when it was erroneously dropped a few hundreds meters too far south of the ship’s designated anchorage. (Imagine how the cable owners must have been feeling after paying for one three week repair to have another unexpected break requiring another repair before they could get their bandwidth up and running again).

This of course means another job for us here in the Straits and the prerequisite permits have to come through first. In the interim the goodly Singaporean pilots have stationed us a mere seven-minute launch ride from the terminal where sailors pass through customs for diversion ashore. 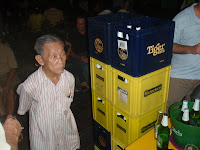 What could be better than being only a few minutes from Tiger Beer and all the Asian culture you can stand? How about working for a company that springs for nine launch trips to and from the wharf daily! That means every day worker and watch stander has a chance to get off the ship. If you’re a night owl there’s a 0230 launch at your disposal and if you push it a little later you can always haggle your way onto another launch to make it in before breakfast. This is a luxury I have never known onboard a commercial ship.

As of late I’ve had the pleasure to explore a few of the eateries and pubs reported in last Sunday’s New York Times about Singapore including a restaurant inside a renovated church replete with stained glass windows and a bar which only for lack of monkeys and the presence of a DJ would've had me convinced I was drinking in the jungle. I also found Singapore’s most expensive drink at the world-renowned cocktail bar Tipple. It was ironically named “F**k the Subprime” and listed for 45 sing, a substantial investment for a little bit of whisky.

My dinner date had a 25 sing cosmo served in a beaker which bubbled over with dry ice induced steam. My favorite drink was dedicated to Ernest Hemingway, who spent time in Singapore, called a “Death in the afternoon”. A simple Singapore Sling, a fruity purple colored staple of Singaporean night life containing just about every kind of booze behind the bar, comes in at an average of 22 sing or 15 bucks. 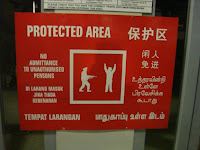 While reveling with ample time ashore and high priced cocktails I encountered a reminder that all in Singapore is not as loose and easy as one American mariner might believe. While walking through a neighborhood known for it’s fine dining, and one of the quietest streets around I might add, I ran into ten of Singapore’s police. These were not your average beat cops walking down the dark streets of Dempsey Hill. No, these guys in their black fatigues and red berets were wearing studded flak jackets each carrying a Heklor and Koch MP5 sub machine gun. These were well armed paramilitary.
Their laser sights and bandoliers meant business and I half expected some fire works to start going off as soon as they had passed but they were just doing what cops normally do in Singapore; eerily remind you from the dark corners of the island that the republic of Singapore is closer to a dictatorship and that the police state is never far away. Oh, they also make you walk your durians home. Like pets the spiny and smelly durian fruit is prohibited on the Mass Rapid Transit sub way. 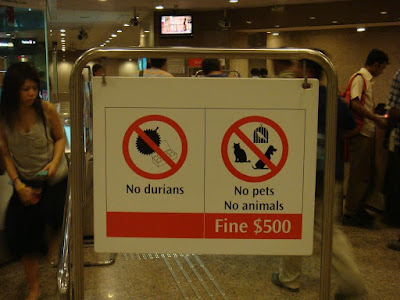