This morning may have been the closest sunrise I’ll get to a true day’s beginning at sea this entire trip. The sun was poised over Horsburgh light ever so illuminant behind a hedge of cumulus clouds scattered above Indonesia. The orange radiance wasn’t meant to linger at 77 nautical miles north of the equator. It was there just long enough to remind me how much I love that quiet moment at sea when the position has been fixed, the coffee is set for the next watch and I settle my mind to observe the earth begin another day as the water rolls by. It's something to be thankful for each time I see that.

Of course the six steel beasts gliding noiselessly by the bridge windows quickly reminded me that I was still on a Dynamically Positioned cable ship working in the traffic scheme that might never make it out of sight of land for the entirety of my hitch. Yet that is the nature of the job and I think I can deal with it as long as the work holds my interest, an essential part to my participation in this industry.

The last week has been nothing short of interesting. I’ve finally been released from the glass prison that is the bridge to participate on the aft deck and cable highway. As everyone has promised none of the work is rocket science. Mostly common sense and experience with a good dose of luck will get any piece of cable on the sea floor without a “Non-conforming bend” or series of assholes in it.

My role as a second mate (I got a bump up last week) is primarily supervisory. The unlicensed crew, all from the Philippines, handles the cable. Whether it’s loading, discharging, stopping off or cutting under the direction of the Bosun or Bosun’s Mate they get the job done with alacrity.

My duty is to observe the operation and watch for danger plain and simple. When the pressure is low the Chief Mate will allow me the Cable P.A. to direct the payout or pickup of the cable drums. Apart from the UHF radio each officer carries, the Cable P.A. is a loudspeaker hardwired in to the drum operator’s headphones. One operator for each drum adjust the speeds as I give the commands stationed over the stern sheaves to keep an eye on the cable leads as they enter the water. So you might understand better how this I’ll works I will quickly explain the steps to a repair job. Keep in mind that in shallow water things happen much faster than they would in deep water repairs.

First off the cable has to be broken to necessitate our departure from safe harbor and a considerable expenditure of funds, equipment and Star Bucks whole bean French roast. This usually is caused by a fisherman’s trawl, an errant anchor or an earthquake and is easily detected by tests ashore measuring the distance from the beach manhole to the break. Once on site, with all necessary work permits, the ship can deploy the Remote Operated Vehicle for a survey pass. Using a sensor to detect a signal tone sent from shore the R.O.V. team verifies the reported cable position and any obstructions on the bottom that might foul our gear. 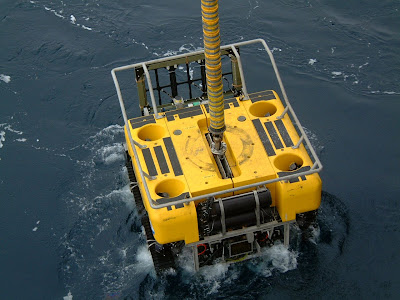 Once the break is pinpointed and the cable studied, which in the Strait of Singapore means dozens of other cables crossed over our objective, we can do two things. One is to use grapnels which is the only method available in deep water. This can be a laborious, and in water with so many cables, a disastrous process. So far I’ve seen one cable drag and it only took five passes to snare our cable while missing all the others. This was quick and luckily a clean job.

For the last two repairs we have used the second method. The R.O.V. is lowered over the side to cut and then grip one end of the cable. The gripper, attached to the ship by a line, is disconnected from the R.O.V. and retrieved to the stern. Once the cable is brought onto deck the crew apply a very sturdy metallic stopper onto the two inch thick armored cable and attach that to a bull chain pad-eyed to the deck. The gripper is cut off and a utility line attached to the end of cable. The cable drum then pulls the line with cable in tow onto the cable highway. Passing down the highway over the three huge cylindrical cable tanks it is guided to the splicer’s shop.

That end is then tested, sealed and lowered back to the bottom attached to a clump weight for retrieval at a later time. In deep water a buoy would be used to save time in the retrieval of this “System end”. The process is repeated, by grapnel or bug to get the other "Fault end" aboard and into the splicer’s shop. In the shop the splicer/joiners take a day to remove the bad spot and splice in enough new cable to replace what was damaged and cut out of the system. A repair job only requires enough new cable to replace what was cut out whereas an instalation may span hundreds of kilometers. For that the three cable tanks onboard can store entire systems for laying across oceans. 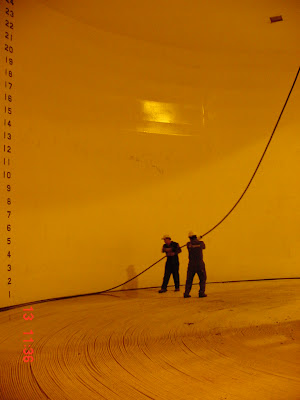 The splicing part remains a bit of wizardry to me. Fiber optic cable is a whole lot of protective and conductive material surrounding a handful of silica wires that are fragile and tiny. If anything is amiss in the conditions for the splice the whole job can get botched but you won’t know it until the splice is molded in hard plastic and ready to go back into the water.

Once the initial splice is complete the cable is paid out on one of the two cable drums as the ship dynamically positions herself over the clump weight which is then recovered to deck on the other cable drum. Now both cables are led over the stern on two separate rotating sheaves into the cable highway after running around the cable drums four times each. Another day is spent holding position as they’re joined in the splicer’s shop and then turned over to the deck department.

Next comes the final bight which is often an all hands event. The crew lines up around the crown of the cable (Near the final splice) and the bight is carried down the length of the cable highway and over the drums all the while being lowered to the bottom by two lowering ropes stoppered onto each cable lead. On any cable that is a segment of a potentially active system lineman’s leather gloves must be worn over rubber gloves for handling at this point in case the cable is energized accidentally. The final bight is then raised over the stern sheaves and lowered by another set of ropes to control the crown placing it as gently as possible onto the sea floor. The whole time the Captain is inching the ship ahead at maybe 0.2 nautical miles per hour and ideally the cable will form a V on the bottom if sufficient tension is kept on the leads throughout.

In an ideal world the final bight would always make a V and I would have used a paragraph to explain this process to you. But that isn't the case so in comes the R.O.V. for a Post Lay, Inspection and Burial. The work is looked over and recorded on DVD, the cable tested by the shore technicians and the crew’s cable watches are returned to sea watches. Were not done though. The ROV must now make it’s jetting and burial passes. The PLIB can take a long time if the owner wants the cable trenched deep enough to stay away from those pesky fishermen.

And as anyone in this industry knows something always comes up so scheduling one of these operations is a lot of guesswork and finger crossing. What amazes me the most though is that this work has been going on in just this fashion since the first cable was laid without the added benefit of Dynamic Positioning. Holding station in these currents to give the splicers enough time to get their job done must have been a phenomenal feat of ship handling. With differentially corrected GPS it is just the click of a button. The safety and efficiency introduced by this technology is phenomenal and surely the subject of another lengthy blog post.
Posted by Deep Water Sailor at 14:45