There are three things I really like to do when traveling. One is to eat the local food. The second is immersing myself in hectic throngs of people jostling for goods only available to them in open air markets. The third is to find where the locals worship whatever deity it is that gets worshiped in that part of the world. Last week I had the rare chance to do all three of these things in a single night ashore.

I had made plans to meet a classmate in town for a few catch up drinks. We hadn’t seen one another since my senior year at maritime and admitted that we had hardly known each other then. Since we were both strangers in a strange land it seemed like a great idea to have someone to meet up with. Furthermore I was craving polite company in hopes of avoiding the debauchery that would surely follow my shipmates off of the launch.

My friend, an ABS surveyor living in , suggested Indian food so after a few pints to melt the ice we headed to little for and curry. I should first premise that my expectations for food in Singapore were pretty low after my first experience with the local fare here five years ago. That entailed two dishes, a curry and a prawn soup, both too spicy to eat much less smell because of a rancid odor as if the ingredients had spoiled from the tropical climate inside a shipping container a few weeks prior.

Our destination, the “Banana Leaf”, was situated on the outskirts of little India and packed with as many Indian families as British expatriates. Being more familiar with the menu I left the ordering up to my friend who felt confident that her choices would not disappoint. Once the order was in to the kitchen a team of servers placed two green banana leaves in front of us onto which were ladled mounds of rice. Next came steaming piles of bread to serve as eating utensils followed by courses of spinach, chicken and mutton prepared in curry and masala sauces. One of the unique aspects of Singapore is that it is such a mesh of Asian cultures that eating India here, even though you're not in Mumbai, almost counts as local food.

After dinner it was time for some sight seeing in a crowded market place. Seeing that it was the height of Dīpāvali, the Indian New Year festival a crowd was not too far off. Dīpāvali translated means “row of lamps” and In Hinduism, Sikhism, and Jainism the event is celebrated for five days in between October and November depending on the lunar calendar. By lighting small oil filled lamps observers signify the triumph of good over evil within oneself. New clothes are worn, little sweet cakes are purchased from vendors on the streets and homes are decorated with bright jangly ornaments covered in small mirrors.

We found a street lighted with decorations and delved into the heart of the holiday market. Hundreds of families were making their way into and out of the tent city as we pressed past tables piled high with bright silk textiles, toys, pastries and fruits. Above our heads were thousands of long paper and plastic decorations adorned in lights and mirrors. I thought we had walked a mile when our claustrophobia caught up with us. Nudging elbows and pressing hands were a reminder that personal space for people who come from a country of 1.2 billion is very different from westerners accustomed to wide aisles at the supermarket and a disdain for physical intimacy with strangers. 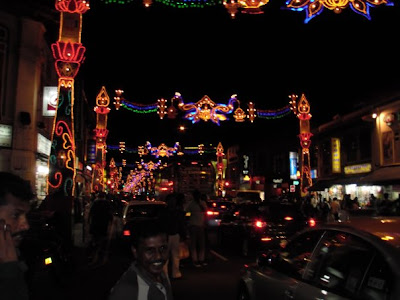 Ducking out of the market past a table of Hindu shrines we meandered up the street and found the entrance to a temple lined by the shoes and sandals of the faithful. Removing our own footwear we quietly walked into the doorway trying not to appear overly curious at the scene before us.

Inside the open air sanctum a dozen deities were housed in individual shrines. Holy men in sarongs with painted faces were blessing devotees. Offerings of food prepared in the kitchen out back were being placed at the feet of elephant headed multi-limbed figurines. Some worshipers were lying prone on the stone floor kissing what I assumed to be the sarcophagus of a holy person underfoot. Another deity was drawing a chanting crowd of parents and children who appeared to be blessing the kids on the eve of the new year.

I don’t know exactly what it is about holy grounds but there is always a sense of solace every time I encounter one ashore. A Lutheran cathedral in Germany, the house of a mannequin god in Guatemala, a Buddhist shrine in the hills of South Korea all provide the same sense of inner quiet that is hard to find here at work and at home. The heavy incense filled air and flickering candles lend to the serenity which gathers the concerns, hopes and prayers of the faithful. I always try to stick around in these places just long enough to stop feeling like an outsider looking into a cultural fishbowl and more like a participant in the spiritual story written on the pages of life. Even I need that from time to time.

After returning to the pile of shoes, none of which seemed to be at risk of walking way on us, we made our way out of Little India and into the night scene of Singapore. By the time we finished our rounds the crew had gathered at the marina waiting for the launches back to the ship. I left my friend at the cab and joined the Filipino crew who had spent their third night celebrating every birthday which had taken place or would take place within a four week time span. We all nimbly jumped from the concrete quay onto the bobbing launch and watched the reflection of Singapore's buildings shimmer in the inky water ready for another three or four weeks on the job. It was a good night to be ashore.