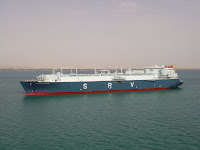 The presence of flies in the wheelhouse hearkened our arrival to Egyptian shores. Expecting the usual delegation of canal inspectors, security officers and agents to converge on us once anchored at the entrance to the Suez Canal the accommodation ladder was rigged and lowered to the water's edge. To every one's surprise the agent called the captain informing him that the authorities no longer made visits to the ships at anchor. Only he and a canal inspector would board us as we passed through Port Said greatly simplifying our transit.

Getting underway on the other hand was business as usual. Ships entering the Suez Canal are directed to cue according to a predetermined convoy arrangement. Naval vessels, LNG tankers and ships carrying hazardous cargoes transit first. Then tankers and lastly container and general cargo vessels. With orders to have our engines ready at 2330 the Captain called us out a little early. Standing by on the bow at 2300 with the Boatswain the line of ships stretching to the north told me it was going to be a long night. After an hour and a half we weighed the anchor, washed the mud off the chain, and approached the pilot station. 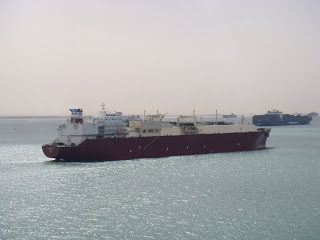 As is standard practice for the Mid East as soon as we were making way and pointed right at the beach Port Control told us to stand by. While airplanes can turn circles we on the other hand, with a jetty ahead and another ship astern, had to drift in one spot, a maneuver only possible in a beam sea with a 15 knots breeze thanks to a pair of two thousand horsepower tunnel thrusters. After nearly an hour of holding position the pilot boat was finally sighted coming out of the port.

By this point I was tired and ready to get the first pilot on, the ship cleared with the canal inspector, and then switch the pilots out. As is custom the pilot boat, keeping ten meters off the side began honking their little horn. "Hello my friend, call Captain and ask him for cigarettes! Cigarettes for pilot boat! Four cartons please!!" Invoking the Captains name in his first request, despite saying please, told me I was in trouble. I had never gotten back up to my office after weighing anchor to stock up on emphysema inducing presents and was therefore about to be denied a pilot. There was no way this guy was going to pull alongside and allow the canal pilot to board without his bribe. 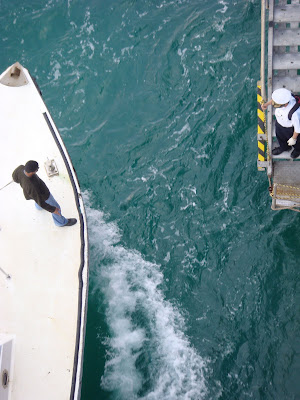 "What the hells going on down there mate?" the equally exhausted captain testily asked. "They won't board the pilot until I give them cigarettes Cap" I replied as one of our security guards hustled up to the office to grab three cartons. As we waited and the Port drew closer on a half ahead bell, I attempted to reason with the launch crew by explaining that the cigarettes would be lowered to them shortly so could they please board the pilot before we entered the harbor.

Not surprisingly the crew took this as a ruse to get a pilot without handing over any cancer sticks and flat our refused to come along side. All the while our pilot just stood there, sheepishly holding onto a hand rail, fully aware that if we didn't hand over the cartons as requested he wouldn't be climbing the ladder until the second pilot was about to board.

The cigarettes arrived from my office in the nick of time and after lowering them by a heaving line to the now appreciative boat crew, the same ones who had just been yelling and screaming at me, the boat pulled along side. Our pilot, a younger than average canal pilot, waddled up the accommodation ladder and bid me good morning as if the conduct of the launch crew was just a funny game and demanding bribes for a pilot to be boarded is commonplace around the world.

The transit went smoothly for the duration of the 150 kilometer canal. All the container ships were jammed packed with boxes including the 170,974 gross ton Emma Maersk, the world title holder for largest container capacity at 15, 500 TEU. Soon though Maersk will even trump their own by constructing ten EEE class container ships between 2013 and 2015 which at a speed of 23 knots will carry up to 18,000 TEU between Asia and Europe exclusively. There is no current port in the United States that could unload the EEE class fast enough to justify the vessel calling in the United States. I wonder how many cartons of Marlboro Reds it will take to get one of these behemoths through Egypt? 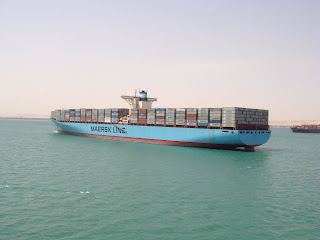