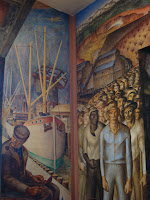 Ever since my first experience at sea I have listened to mariners lament how the number of ships sailing under a U.S. flag has dwindled for decades. In a world where there are now over 100,000 merchant vessels the United States Merchant Marine accounts for only 1.4% of the total gross tonnage; a number that has only fallen year after year from a high of 36% in World War Two. Of course WWII was an exceptional time when our sealift capacity ensured the allied nations of Europe were fed, fueled and armed but for the wealthiest nation on earth to reside so low on the list is concerning for seafaring Americans such as myself.

What troubles me more than the low number of American owned, operated, crewed and sometimes constructed ships is the average fleet age of the few remaining deep sea vessels. While American shipyards are busy pumping out tugs and barges the number of new build activity for long haul ocean transport is anaemic. Not counting the "grey hulls" or ships funded specifically for defense purposes the U.S. merchant fleet is antiquated and will eventually become obsolete as fleet age is a major factor in choosing a shipping line to haul one's cargo around the world.

Like farming and banking nearly all american ships in foreign trade are in one way or another subsidized by the American tax payer. The only reason I have a job sailing overseas is because congress has authorized funding through 2015 for the Maritime Security Program, a subsidy which encourages the re-flagging of foreign built ships into US registry. By offsetting the higher operating costs for US flagged vessels it ensures sufficient sealift capacity in time of war or national crisis. Since these ships are foreign built they are ineligible for Jones Act or domestic trade and therefore are only engaged in foreign commerce, hence why my job.

These thoughts were running through my mind the other week when I leveraged my rating as Chief Mate to take a quick tour of a Norwegian flagged vessel moored astern of us. Since only in America are there "Chief Mates" I introduced myself to the Filipino security watch as the "Chief Officer" of the American ship loading cargo at the next berth and inquired if his Chief Officer wasn't too busy to allow me onboard.

"Yes, he's on the bridge and would be happy to show you around" the crewman replied in a thick Tagalog accent as another of the ABs on watch came down from the upper holds to escort me to the elevator. On the bridge? That's about as far from the cargo operation as he could be I thought as we rode the elevator to the upper most deck.

The size of the ship was impressive from the dock and standing on top of this sky scraper was no different. The AB led me to the bridge, which he would not enter in working clothes and boots where the Captain, First Assistant, Radio Operator and Chief Officer were standing around wearing pressed salt and pepper uniforms. They greeted me with some curiosity unaccustomed to having visitors from neighboring ships. I was immediately curious why three of the top four officers were all on the bridge. I've never even seen the First Assistant Engineer on the bridge of a ship much less wearing a pressed uniform. "Don't you belong down in the hole?" I wanted to ask as we made small talk and I explained the trade route and number of crew on board my ship.

"Only 20 crew?" the Chief Officer asked. "We have 27 plus two British deck cadets." Oh that must be nice I thought as it explained why the management officers were all bullshitting on the bridge in port during cargo operations. The Chief Officer then explained that the Radio Officer, another rating now absent from the crew lists of American ships (Ever since GMDSS was implemented), was running some sort of IT test on their internet system to check for cyber terrorism weaknesses (Every ship in their fleet has internet), but he had a few minutes and could show me around.

I thanked the Captain for his time and made my way down the ladder well to the accommodation deck. The door opened into an atrium with a wide stair case that descended to the accommodations. I was blown away by the grandeur of such a space on a ship that really served no utilitarian purpose besides impressing visitors. At the bottom of the stairs were a set of glass book cases crammed with literature. To the left of the atrium was a small lounge for port officials and other important persons visiting the captain. A model of a Viking longboat crafted out of wood served as a centerpiece in the cozy room.

We walked past the ship's offices, one of several places including the bridge where the Chief Officer could remotely operate the ventilation and ballasting systems, and into the officers mess. The entire crew could have eaten in the room but the unlicensed had their own mess abaft the galley and closer to their own living quarters. A well appointed gym was across the hall complete with a glass faced squash / basketball court. All that was missing were the saunas commonplace on Swedish flagged ships.

If an after duty game of squash wasn't enough to wear you out than retiring to one of two lounges was always an option. The crew lounge was fitted with an entertainment and Karaoke system as well as a full drum kit, guitar, bass and amplifiers. Music is as culturally necessary for Filipino seafarers as white rice and fish at breakfast. The officers lounge was further forward and massive. Art work, a dart board, photographs of numerous barbecues onboard and plush settees lined the walls while a full bar and stools filled one corner. The spotless carpet professed that it was an off duty clean clothes only establishment and beer coasters sporting Beck's, Fosters and Heineken abounded. It was evident that Norwegians could not only be trusted to operate a multi million dollar ship but they could also be trusted to have a pop or two afterwards.

Moving further aft down the recently waxed deck, besides the cleanliness and modern fixtures of the interior, I was most impressed by pyramid sky lights placed in the overhead at each intersection of the passageway allowing natural light to fill the ship. It hearkened back to deck prisms and the master's cabin sky light on sailing ships. I peeked into the Chief Officer's stateroom at what looked like a showroom at Ikea. "The carpenter put in a new carpet this trip. Last trip he tiled all the officer's heads." I don't think an American ship has employed a carpenter since the 1970s.

Leaving the ship I couldn't help but feel a pang of envy. Not for the posh accommodations or large crew but for the overall impression the vessel and her crew gave off. They were employed by a powerhouse in the shipping world and everyone onboard and in the port knew it. The vessel was built for cargo and a lot of it but making an impression on visitors and the crew as comfortable as possible was also calculated in; sentiments that today seem lost in the Walmart mentality of most shipping companies.

Of course it would be hard to use this vessel as a comparison for American ships. First of all she was definitely not built in Norway. Doing so would be as cost prohibitive as building one in say, the United States. She was of South Korean ancestry and therefore much more affordable and timely in her construction. An American vessel, unless subsidized by MSP must be built in the United States if she is to carry cargo from one domestic port to another or in other words be Jones Act compliant. As it stands now without being constructed in the U.S. a ship couldn't carry a single TEU from Newark to Portland Maine legally.

Also, her crew was only partially Norwegian. The unlicensed, and quite possibly junior officers were all selected by a Filipino crewing agency from thousands of qualified mariners educated in Filipino maritime academies. American vessels on the other hand are almost always crewed by American citizens. (Unless you're working in the South Pacific fisheries where only the "Paper" captain must be American, an egregious loophole for U.S. registered fishing boats with Asian crews).

American crews are traditionally viewed by shipping companies as expensive not just on account of the higher standard of living in the U.S. but our litigious nature. While it's true we earn a higher wage than the majority of seafarers from other nations the reason American mariners may be so sue happy could be that the maintenance and cure offered by the Jones Act when injured was pegged in the early 20th centure at seven dollars a day. That won't even get you an aspirin in hospitals today.

Furthermore an entire Norwegian vessel, though flying a red and white flag, can be entirely manned by non citizens benefiting the company with reduced crewing costs making the Norwegian flag comparable to any other "Flag of Convenience." In the U.S. this too is prohibited by the Jones Act, yet another reason almost all shipping companies based in the United States flag their fleets in Liberia, Monrovia, the Marshal Islands or Panama.

While the shipping industry remains to be big business in the United States the companies do not support American shipbuilders and seamen as it once did. The industry has been outsourced to foreign fleets for the very same reasons we no longer make television sets and automobiles like we once did. While large shipping companies reap the rewards of cheaper labor, looser regulations and lower construction and maintenance costs I fear that we may loose the capability to maintain a true ready reserve capability as a maritime nation.

I'm no war hawk but with the reduced size of not only our merchant fleet but also our navy we may look big in GDP but our presence on the high seas may be relegated to the lowest bidder. Loosing the work force to build, maintain and operate deep sea tonnage will prevent the United States from regaining the autonomy we once held as a global economic force. The original purpose of the continental navy was not to project military might but to protect the merchant vessels that supplied the expanding colonies with everything they could not grow or produce on their own.

I do not mention these thing for want of alcohol onboard ship or dinning ware emblazoned with the stack insignia or the white glove role some officers on foreign ships with multiethnic crews enjoy. I mention it because I believe that when you loose something as integral to our maritime economy and heritage as a self sustaining commercial merchant marine free of government backed construction loans, subsidized operations and cargo preference laws the chances of recovering such a fleet are slim to none.

And I don't think the answer lies in the good intentions of investors dedicated to the furtherance of an American Merchant Marine despite the economic forces weighing against such an effort. The solution lies in the halls of congress and reworking the antiquated legislation that today protects the few remaining jobs for american seamen but will ultimately squash the ability to find backing for new maritime ventures. If there was ever a time to change these laws allowing for business plans that will actually work to grow the American flag it is now.

For more information on the U.S. merchant and naval fleets through history visit Tim Colton's website http://www.shipbuildinghistory.com. His daily blog http://www.coltoncompany.com/ includes the latest in ship building and operational news. 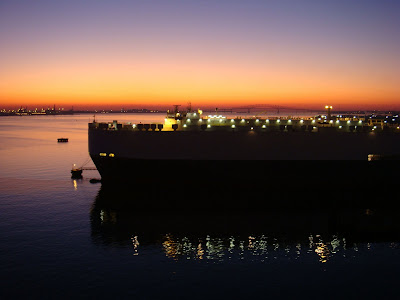 Email ThisBlogThis!Share to TwitterShare to FacebookShare to Pinterest
Labels: Opinion