"Cargo is King" was something I remember my dad saying when I was young. At the time I had no idea what it meant as he related tales from his latest trip as Chief Mate on a product or chemical tanker to his buddies. As I grew older and decided a maritime college was the best way to liberate myself from the drudgery of a nine to five (And the financial indebtedness a bachelors degree incurs) the thought of spending a career moving one commodity or another across the ocean was not at the top of my list o' reasons for joining the merchant marine.


Nor when I sat through my first introduction to dry cargo class did cargo mean any more to me than memorizing the aged professor's maxims such as "Bung up and bilge down" or "Cold to hot, ventilate not, hot to cold, ventilate bold!" The first cargo I actually ever dealt with was a small lift of medical equipment loaded into the lower deck of the maritime academy's training ship. A humanitarian cargo destined for Natal Brazil and gladly transported by the two hundred cadets on board eager to drink Arctic beer and cavort with the local inhabitants on the white sand beaches.

It was in the summer of 2002 that I had my first smell of a real shipborne cargo. Verified gas oil or VGO was about the nastiest sulphuric gunk the chemical tanker I had the luck to be assigned to would carry. Ketones and glycol smelled much sweeter but would send your head spinning after too much time spent needle gunning down wind. Even in my cabin at night I would get stomach aches when the crew washed naphthalene tanks, the one time of day I didn't participate in the evolution, and caustic soda left a huge, purple, hickey like burn on the side of my neck which the Captain personally told me would never go away or as he put it "Oh s%$t cadet, now you're f$%&ked, that's never coming off."

The caustic burn did peel off but my interest in liquid cargoes remained. After spending my first summer out of school on a schooner sailing to Newfoundland with a cargo of adolescents I did found work on my third mate's ticket aboard a tanker but it wasn't one of the big money jobs everyone who had sat through the advanced liquid cargo class had hoped for.

Just like my cadet shipping she was another rundown American chemical tanker. This one though was a "pharmacy" tanker with 52 segregated tanks, four separate headers, two single tiers forward and two double tiers aft and enough piping to require hundreds of low point drains. Each tank had an efficient stripping system for when the Framo deep well hydraulic pump lost suction so you could get every last droplet of product out. Those Framo pumps made a whining noise I will never forget. The center line tanks were stainless steel for food grade products and caustic soda. Paraxylene, the stock chemical for plastics and a very tricky cargo as it will freeze solid at a mere 56 degrees Fahrenheit, plus lubrication oils were our most common products but we could carry anything else including phenol which at best would induce a coma if ingested.

My cadet shipping experience had prepared me well to stand my own cargo watch. The autonomy we had during cargo, even stripping out and topping off tanks, was great for building my confidence. I learned to communicate exactly what I needed to the pump man at the mix master or AB at the manifold.

It was a hard working ship and had a solid and very young crew but after two trips I could see the toll the complexity of the cargo system and demands of the spot market were taking on the Chief Mates. I also noticed that the world of tankers was a little lonely. There you were in the middle of some hot August night floating in a swamp in Texas loading enough product to fill an olympic pool but there were only two or three guys around. Job satisfaction yes but not much of a team effort with people ashore.

I gave up on the company early and became intrigued by a job I had heard about on a fleet of RoRos. Clean cargo holds, European ports, art in the corridors and rooms. This sounded like a nice change, especially if I was going to see less more of the world and less of the Houston ship channel.

I applied and was hired but found myself on the oldest of the old with smoke stained passageways, dirty cargo holds and leaking hydraulics all around. It didn't matter though, I was sailing foreign and loved it. Charts for the Mediterranean, Middle East, Asia and Pacific Northwest were needed plus we had long sea passages for celestial navigation practice and then lots of traffic to challenge my recently acquired bridge team skills.

Unfortunately unlike the tanker there wasn't that much for me to do at first. The cargo was rolled up the side or stern ramp and then secured by gangs of lashing bar wielding longshoremen. All I knew how to do was check the lashings for tightness and proper amount and try to impart my desire for secure cargo to the longshoremen. I used to say things like "Hey guys, you're not the one that has to sail into a hurricane with these lashings loose so could you redo this one?" but now I know better and go directly to the foreman to lodge my complaint about lazy lashing gangs. Despite their gruffness they are more than happy to get the job done correctly once you remind them how it should be done every single time.

It took me two years to really gain a footing as to how cargo on a RoRo should be stowed. There are so many variables involved that when I look back on my first couple of trips I realize how very little I knew. Probably the major reason I felt as if the Chief Mate at the time didn't really trust the junior officers to do more than watch vehicles for damage and check lashings.


The most satisfying aspect of my job today, a job that is about as far from a nine to five as one can get, is taking part in the sometimes simple and sometimes massive operation of getting a RoRo filled with cargo. And what fascinates me now isn't just the operations that take place inside the cargo holds but the bigger picture of getting the cargo from the manufacturer to the consumer. 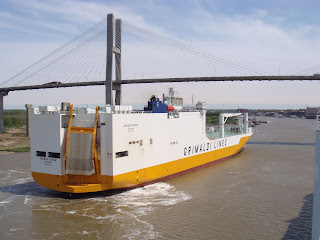 A beautiful brand new ship and example of cargo versatility using the RoRo method plus a weather deck with ships gear for ondeck stowage of containers and heavy lift cargoes. If only we could build em like this...

The RoRos I work on can take such a variety of cargo that they hearken back to the days of stick ships carrying break bulk, the main difference being instead of taking weeks to unload with booms and runners and winches and guys our cargo is simply rolled, towed, pushed or driven on and off. Right now we have containers, automobiles, heavy machinery, loose pipe, diesel generators, motor yachts, motor homes, break bulk and even a few massive pieces of power plant equipment all stowed under deck. Most of the cargo requires either web-lashing or chain and tension binders but some of the project cargo has been welded in place and secured with massive chains.
The entirety of the past twenty days have been focused on getting the ship alongside 8 separate docks for the load we are now carrying towards the Mediterranean. With lubes, slops, bunkers, a Coast Guard inspection and loading all the stores, spares and provisions we'll need for the next three months it's been a busy spring. The cargo though as my dad would say is definitely king.

Without cargo the ship wouldn't go to sea and I would go unemployed. Without cargo tug boat outfits and pilot associations would be without jobs. Without cargo entire coastal economies built around large marine industries would shrivel. Without cargo globalization would come to a halt and all that Ikea furniture at home would still be in Sweden.

Even beyond the satisfaction of packing our ten decks full of differing commodities I find it rewarding to just stand as a witness to trade on a scale only shipping allows. I see firsthand what is sitting on the docks in Baltimore or Jacksonville or Japan waiting to be exported all over the world. I see the cargoes that are being imported from abroad, unless it's a container and then you just see those by the thousands.


I remember right after 9-11 when I was a cadet and the mates on the ship were all commenting about how empty the decks of the container ships were coming in and out of Newark. It was the economy nose diving after that event when trade volumes plummeted. You could see the same thing two years ago. The world's RoRo fleet went from a complete under tonnage necessitating our steaming to Korea to load hundreds of excavators for Long Beach to talk of car ships being used for parking garages in a matter of months.


It is incredible to think about a life in which one assumes there will always be gasoline coming out of the pump and the TV you need will always be in stock. Simply explaining my profession to people, even those who live in the ports I visit, is more often than not met with blank stares. The concept of ocean shipping is so foreign to the average American I chalk it up as another sign of our collective ignorance, a sad predicament for a nation so dependent on imports.


Perhaps it's that very same ignorance that I so often lament which keeps the masses from finding out about ships and flooding the job market making seafaring a more competitive and less lucrative occupation. Or perhaps it's being off the land for months on end. Like all things in the marine profession such as spending a watch surrounded by whales or seeing the mid oceanic horizon swallow the sun in a green flash, taking part in the world's commerce first hand has been a part of the trade since boatswains were wearing short pants and cargo was king.
Posted by Deep Water Sailor at 12:00