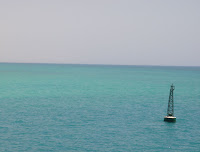 It's not often at sea when I come across a sight that gives cause for a double take. Celestial, meteorological or biological phenomena are, if not always predictable, at least expected. A solar or lunar eclipse is a slow affair. A meteorite's fiery atmospheric entry is sudden but not surprising. A waterspout is a waterspout. Breaching whales or spinning dolphins are entertaining but not uncommon.

A school of 200 migrating sea rays was different. At first I thought they were flotsam, maybe plastic bags drifting aimlessly around the gulf perfectly arranged edge to edge just under the surface. Nope, look again. There were narrow tails, flapping wings, and small eyes moving towards shore in organic formation, definitely not trash. An absolutely incredible sight from the bow as we anchored; something I had never seen before. An encounter the kind of which should be taken as an omen.

One of the most frustrating aspects of working on a cargo ship in the Arabian Gulf is dealing with the pilots and port control. I do not pretend to be a sea pilot or a docking master but after participating in hundreds of dockings on the bow, the stern and the bridge a mariner fosters a certain feel for a vessel's natural progression under the direction of a pilot.

Pilotage is the carefully planned series of events needed to maneuver a vessel down a river or channel, stop and turn in where there’s sufficient room and then gently lay her along side the dock. This is an all hands evolution requiring the deck department to be split between the bow and stern with the second mate forward and third mate aft while the Master, Chief Mate, a helmsman and the pilot are on the bridge. The process involves tugboats, bow and stern thrusters, helm and engine orders and line-handlers on the dock to receive the ship's hawsers and place them on bollards.

A seasoned crew familiar with their ship and under the direction of a competent pilot or docking master can easily accomplish a docking or undocking safely and efficiently at any hour of the day. Each step is discussed by the bridge team and executed with the calm confidence that comes with any well practiced routine at sea. A cautious breed, pilots usually have years of experience either at sea or in one particular harbor or both. They tend to think ten steps ahead of time but do not hesitate to take quick and substantial action when the situation warrants.

The repetition of piloting ships into and out of a single port garners a level of specialized expertise that masters depend upon. The pilot in turn relies on the master to furnish all the necessary information about that particular ship and her capabilities. For the world around this is an industrial norm and lends to a sense of pride and professionalism for everyone involved. Unfortunately when in the Arabian Gulf it all comes to a stop.

It's hard for me to understand the lackadaisical approach the pilots in most Gulf States have. If there is one aspect of my job that I really enjoy it is being involved with handling the ship.

My role involves keeping the bell book and operating the thrusters but recently the Captain has been taking a step back and allowing me the conn when working with the pilots. Every single time he lets me do this I learn something new about the process. If I swing too wide making a turn into the channel or cant the stern too close to the dock when coming alongside I make a mental note and do everything I can to never repeat my mistake.

Being given responsibility and allowed to make mistakes under supervision is the best way to learn any job but the pilots here in the Arabian Gulf never seem to learn from their own. They perform the same ridiculous maneuvers over and over again oblivious that they're "Stop engines, hard right" command is counterproductive and a shoddy show of seamanship.

It's a miracle ships don't go bump more often with the bottom, the dock or one another here. I have seen pilots completely oblivious to current and wind botch simple turns in buoyed channels and get indignant when the Master, concerned about bank suction, asks if he's getting back to the channel center. I have seen pilots get on and off the ship inside the breakwater feeling that their duty ends once the ship is off the dock and headed in the general direction of the open ocean.

I have to give the Captain his credit here. When pilots do things completely counterintuitive to ship handling he calmly stands by balancing the absurd with the hazardous. It's a fine line to walk in-between instigating a cultural clash by taking the conn from the pilot and kicking him off the bridge or allowing him to put the ship in near jeopardy to get the ship docked without a fracas. Fortunately for us the ship always makes it along side despite the teeth clenching over reliance on start air draining engine commands, tugboat assistance and constantly asking "What's the course now" as the pilot stands over a gyro repeater.

Port control is no help either. Entrusted to direct ships like air traffic control the port towers are oblivious to the navigational hazards we contend with when drifting a half-mile off the port waiting for a pilot that's a half hour late. Pilot on arrival is an unheard of concept in many ports, unless they're waiting for you and then there will be all hell to pay. It makes the crew feel as if our purpose is to appease the port and the pilots taking every chance to make their lives as easy as possible.

In one recent port call after the pilot had taken us off the dock, when he should have been lining the ship up to pass between two reef markers, he allowed the wind to take over and push the bow to leeward. When the captain questioned if he was intending to steady the ship on a course the pilot said "It's ok Captain, you can take it now" to which the Captain replied "All right, why don't you just get on your pilot boat now". Doing so the pilot explained wasn't allowed. Watching from the tower we were just passing Port Control could levy a fine against him. He had to wait until after the first reef was astern before he could disembark.

What was even crazier was that this guy had two apprentice pilots in tow. They spent the transit dabbing form their faces what must have been the first sweat of their lives with handkerchiefs. All three grimaced when I told them sorry, but there were no white gloves for their delicate hands when climbing down our dusty pilot ladder. What kind of pilots will these guys turn out to be if this is whom they're learning from?

The afternoon I spotted the school of rays we were anchoring 6 miles off another port awaiting a berth. When the ship sailed from our slip we weighed the anchor and began steaming in as directed by port control. After the wind picked up to a blustery 12 knots the port informed us they would not be taking us in due to adverse weather; very typical.

I let go the anchor as the sun set and then went to my room for some sleep, weather delays can last days here. Ten minutes after laying down the bridge called ordering me back to the bow to begin heaving up the 7000 kg anchor under a flood of orange sodium deck lights. Port control had changed their mind as the wind had calmed a little. Unbeknownst to them an anvil cloud was rising to the west pouring bolts of lighting onto the refinery dotted shoreline.

Only once the anchor was aweigh did the port realize the calm airs they were experiencing were those ahead of a vicious cold front. With little concern for our troubles they called again to tell us that "All port operations are canceled” indefinitely. As the lighting increased stretching across the sky I laid the anchor chain back on the bottom. A cold draft of upper level air swept down from the encroaching front and rushed over the bow. After a month of 90-degree weather that cool breeze felt as foreign as if a snowball had hit me in the back of the head.

Sensing that all hell was about to break loose the Boatswain and I briskly secured the anchor and walked aft to the safety of the house just as a brown wall unseen moments before obliterated the lights on shore and raced towards the ship. By the time I made it up to the bridge to watch the show the entire ship was immersed in a swirling haze of sand.

It was an all out sandstorm that only the sea rays knew was coming. The shore authorities had no forecast for the event nor had we received anything from the GMDSS. The sand filled air was so thick with sand that there was nothing to see but a pool of brown light radiating from our deck lights. With 40 knots gusts the situation, had we not been at anchor could have been precarious. Had we been underway it's doubtful the engine would have ran for very long with sand filled air filters. Had the port called any sooner we would have been underway and turning around close in to shore with a handicapped engine, an unenviable situation.

At least we were able to wait at anchor for the next 24 hours until the sand subsided and visibility improved. When the pilot did finally board the following day he was dressed in a fine white uniform wearing a high pressure naval cover and aviator glasses. If only his ship handling were to turn out as smart as his appearance. 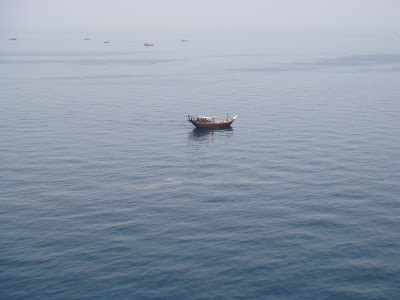