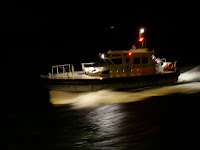 There is a trait inherent to working in the Merchant Marine which one must anticipate and accept; every task or endeavor, no matter how simple, routine or pre-planned has the potential to become a massive pain in the ass. This trait is surely minimized by personal experience, preparation and a good inspection and maintenance schedule but still, some things will always go awry, especially when it's your last day at sea.

At the end of my last hitch the morning started just as usual, early. I was up before my normal wake up call of 0320 anticipating what would hopefully be my last day at work for several months with a muted excitement trying not to jinx myself. My bags were packed and staged for a rapid exodus and I had taken out as many variables as possible by electing to not have the management company arrange my travel but instead rely on family to pick me up at the dock.

Having a reliable relief all ready familiar with the vessel was an added advantage enhancing the chance that I would be spending the night in Charleston with a Sushi dinner and a pony keg of beer lashed firmly down in my belly. Slowly crawling out of a sleepy stupor with the help of good ground coffee I made my way to the bridge to watch the lights ashore grow larger in the early Florida dawn. The boson, who had also just gotten up, called the bridge and received his orders for rigging the pilot ladder. Not wanting to roust one of the day men who would surely have a full day ahead, I joined the boson at the pilot port to lower the rope ladder. What we had done a hundred times before became a wrestling match as the pneumatic winch wouldn't operate to slack down the ladder.

A routine operation soon became imperative as the pilot boat neared us and our vessel neared the channel. If the ladder didn't lower the captain would have to slow the ship loosing steerage as we attempted to board the pilot from the windward side instead of the preferred leeward side. Just as I was anticipating having to wrestle the other ladder to a meter above the water the winch started turning and I hurriedly got the ladder in position as the boson shackled a rung to the deck edge.

Once happily shaped up for the breakwater the mate on watch called out all hands. In half an hour the deck crew would be "Fore n Aft", split between the forward and after mooring stations. That morning I was happy to see not two, not three, but four American vessels including our own moored at the terminal. I was even happier to see the reliefs starting to arrive which signaled the start of the long awaited suitcase parade.

Of course having my bags packs didn't relieve me of a final day's work. The serenity of our self contained vessel, nearly forgotten about by the outside world during our two week crossing from the Suez Canal to the U.S., was shattered as soon as the stern ramp was landed on the dock. Customs and Immigration officials boarded first to compare faces to passport photos in the passport parade. Agriculture boarded to inspect garbage and food stores laid in over seas. The agent wanted to visit with the captain requiring all the times from our logs which he could probably look up for himself had he the wherewithal to do so. Stevedores and longshoremen lined the dock waiting for the go ahead to trudge up the ramp and begin unlashing five decks of cargo for discharge. At least the external audit had been moved to the second day in port, one less thing to contend with during this 127th day at work.

After a long winded ramp meeting with an overly self important foreman the longshoremen got to it and began emptying the ship of cargo. At the same time reliefs, stores, spares and the diesel oil truck arrived. With most of the unlicensed trying to get paid off it came down to the captain, boson, the mate on watch and myself to facilitate the entire operation outside of the engine room on a ship that hadn't been to the United States for two months.

Just as things seemed to be under control and I was beginning to wonder when the hell my relief would walk up the ramp the ABS auditor arrived. "Yes hello, fine to make your acquaintance. Not sure if you know this but we just arrived two hours ago and today might not be the best day to inspect every aspect of our Safety Management System unless you're comfortable doing so without a crew member to point out every single binder, certificate and computer file for you. That's not up to me though so you'd better go and see the captain yourself. Here's your wristband and an escort."

The Master, feeling much the same, asked that the auditor to return the following day when we had been told the audit had been scheduled for and things would be much calmer. Understanding our predicament he departed and I allowed a sigh of relief having dodged a massive bullet.

Beginning to feel a little woozy from too much coffee and skipping breakfast/lunch I wolfed down a cold pancake with the last of my hoarded real maple syrup and gathered the new on signing crew in the ballast control room to complete their ship familiarization paperwork. Running down the list of company required topics such as how not to injure oneself when entering and exiting the head and why not to smoke in bed my relief appeared in the doorway. Trying to hide my elation from the new crew, the poor bastards, I finished up the familiarization with a flurry of initials and signatures so I could get to my turnover. Two hours later I was changing out of my only pair of filthy company approved coveralls and waiting for my brother to call from the gate letting me know his TWIC, MMD and Florida's drivers license was enough to get him into the terminal less I should have to walk to the the highway myself.

With a hearty handshake I bade my fellow officers and only social network for the last four months a fond farewell and hefted my gear into the back of my brothers BMW coupe. As he proudly floored the gas pedal of his one and only material possession I marveled at how fast 90 miles an hour felt after spending four months doing 19 nautical miles an hour. Once we slowed to a legal 75 and I released my grip on the arm rest it hit me like a wave: It was all over.

The last four months of day in, day out work was finally finished. I had been relieved, paid off and discharged and should I choose so, never to return to another ship as long as I lived, or at least as long as my bank account held out. I mention these small trials and tribulations of my last day not to highlight my own endurance but to give an example of what every mariner in this watery world must put up with to return to his or her homeland and family.

There is no such thing as an easy trip especially in a merchant marine where under crewed ships wanting for larger budgets rule the day and over regulation and criminalization of seafarers is the norm. Thankfully for the global economy (And in the case of the United States, national defense) there are still people willing to put up with all of the above and so much more to keep the main engine online and the navigation lights lit and burning brightly. I for one have decided to give up going back to sea for the remainder of my vacation. In a few months though it might be time for another hitch because as anyone who has been to sea knows, living on land is another massive pain in the ass!
Posted by Deep Water Sailor at 08:44