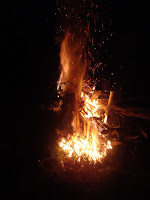 Undoubtedly seafaring is a life steeped in extremity. Take for example where the mariner toils day after day. There is no place save for the most remote desert or outer space as empty as the deep ocean. Years of our lives are spent there floating in an azure void interrupted only by occasional wild life or rare surface piercing mountaintops.
I remember conversations I would have with the crew on the cable ship where I spent this past winter. The Filipinos always wanted to know how many kids I had and were surprised to learn that my home not only lacked a wife but a progeny of a wee merchant mariners. As they smoked cigarettes in the early morning light waiting for the ROV to surface from another repair they would share how many children and extended family their meager paychecks supported under one roof.
"When was the last time you were home?" I would ask the Boson and the four or five ABs standing along the rail. The reply was a mix of not weeks but months numbering anywhere from four to twelve to eighteen.
"How long will you see them for when you go home?"
"Maybe three months, maybe two" Roberto the Boson would say as they all nodded in agreement. Two months out of twelve, no occupation requiring your absence from those you love could be more extreme than that.
I have written about the extremities of going to sea before; the long voyages, insane work hours, unstable personalities, the risk, liability and intense boredom; all symptoms of a career that keeps us longing for an easier livelihood closer to home. But for those of us who are fortunate enough in the world's merchant marine to get as much vacation time away from the ships as we do living on them there is a flip side which balances out the extremes of work.
At the moment I am in the midst of one of those memorable vacations enjoying all there is we go without at sea. It's been busier than anticipated but I suppose there is no other way to get as much hiking, kayaking, diving and surfing in as I can. I have a list of criteria I strive to fulfill during the first few weeks at home which begins with sleeping in my own bed as long as I wish.
Next on the list is immersing myself in the land and getting as far away from the sea as possible in New England for a few days. Like the last three years I accomplished this by driving five hours north of home and camping out beneath the granite wall of Mount Khatadin, Maine's highest hill. This hike is one of the best I've done. Compared to the high mountains of the world Kathadin is a mere 5,260 feet above sea level but the grandeur of such a monster rising from Maine's expansive woodlands really gets my heart thumping. 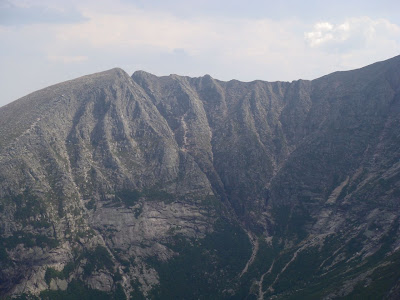 Also on the top of that list is ending a streak of sobriety by getting snockered around a camp fire or two, eating as much seafood as possible without paying the exorbitant tourists prices, and once my yearning for the ocean comes back spending as much time on, in or under the surface as I can wearing a wetsuit.
All of these activities though have worn me out and I'm beginning to understand why my dad avoided all contact with the outside world when he would come home from sea. His standing orders were simple. "Do exactly as I say at all times or I'll put my foot up your ass and if the phone rings, I'M NOT HOME!"
On many youthful occasions I would answer the phone telling the state revenue service or local constabulary that the old man was still out to sea and my mother had no idea when his ship would be pulling in. This was his way of ensuring that time not being paid a wage to deal with crew, cargo and maintenance would not be wasted by the burdens of society which were obviously meant to plague landlubbers not sailors. I can empathize with his disinterest in anything not involving family or the lake during his vacations. I'd probably have a lot more on this blog if I followed his footsteps.
Socializing with friends I haven't seen in months is another item on my vacation punch list and well worth leaving the serenity of home. Below is the fruit of one such social event where a friend and I baked up enough shell fish and vegetables to feed fifty people. Fueled by the meat of fifty lobsters, a keg of Sheepscot River Ale, and a bottle of 1800 tequila it was the perfect late summer day and one of the most memorable nights of my summer. 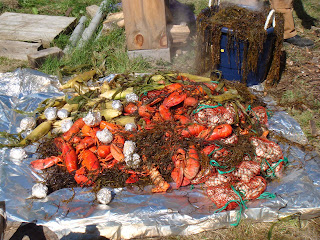 The process for a proper lobster bake was easier than I had remembered working on the windjammers in Penobscot Bay. Cut an oil tank in half, situate it on top of six concrete blocks and stoke a raging fire underneath. Lay down a thick blanket of wet seaweed, insert potatoes, lobsters, unshucked corn and clams (We used new bait bags to hold them). Place another thick layer of seaweed with an egg on top and cover with wet canvas or tinfoil. In one hour make sure the egg is cooked through and it's done. Can't think of a better way to prepare a meal than that.
As the full moon is past and summer now celestially over I'm hoping to buckle down and get ready for my next trip to sea. The leaves are turning along the Salmon Falls River and cooler weather is surely on the way.
Posted by Deep Water Sailor at 10:47

Email ThisBlogThis!Share to TwitterShare to FacebookShare to Pinterest
Labels: vacation