This is the kind of day sailors live for at sea. Partly cloudy, a force 5 on the starboard quarter, thirteen second roll period (No more than five degrees either side of upright), cool temps and cooler seawater. Stepping out onto the bridge wing with the boson this morning to have a look at the latest painting project was like jumping off a cliff into a lake after the first cold night in September. It felt so distinctly different compared to the heat, humidity and grittiness of the last month that I was awash in waves of physical relief.

A little relief is in high demand right now. The crew is toasted top to bottom with me leading the charge. Only one other guy has been on for longer than I but he has the luxury of taking a day off from working overtime. I on the other hand have a mountain of paperwork and external audit preparations to surmount plus the tail end of an expansive to do list. Evaluations, letters of recommendation, cargo orders, relief notes, overtime projections and work instructions for the preventative maintenance system await me in my office. On deck I have three painting projects, leaking hydraulics to inspect and fix, a crack in the bridge wing awning to weld, an anchor windlass to adjust and plenty of cleaning prior to arriving in port.

The signs of a long voyage at sea are beginning to show in the crew. The food has been hit or miss lately as the stewards department looses steam but you couldn't tell if you were sitting at our table.

Yes, we'll eat anything you put in front of us and we'll eat all of it too no matter how disagreeable it may be to our sensitive palates. Sugar on the other hand is something everyone likes the taste of and therefore it's consumed at a higher rate than the not so fresh remaining fruit and vegetables. At home the captain swears he doesn't eat cookies or ice cream but at work it is a daily affair. I've found a new respect for toffee and Norwegian kit-kat bars that were left over in the slop chest by our predecessors.

There was a short panic last week when the first assistant bought out the rest of the slop chest's diet-coke and everyone realized that soda was done for the rest of the trip. At least thanks to the frugality of the mates we've managed to horde our last three pounds of Starbucks on the bridge for the final leg of the trip conserving our caffeine buzzes like junkies.

Now if you're putting down you're latest Patrick O'Brien novel you might think were a bunch of softies hoarding snickers bars and whole bean Starbucks so I must remind you that sailors have always had their creature comforts at sea, some of which are still assured by law in the Focsle Card. While tobacco and rum have lost their prominence in the Merchant Marine (There is a Zero Tolerance alcohol policy on board and smoking is only allowed on weather decks), like grog with a wedge of lime, comfort foods are in high demand.

Lately I've been waking up exactly sixty seconds before my call at three twenty in the morning. The result of fours months of institutionalization I am now biologically attuned to the impending ring of my phone and rise without question for watch each day. I have a constant tension in the back of my neck which embarrassingly is more likely from the gym and poor posture but I'll blame work anyway. My attention span is also faltering, not a good trait when operating heavy machinery such as ships and the like, but this is an unavoidable result of intense routine and isolation.

Another sign of our time away from civilization has been dinnertime conversations digressing to playing Who's Hotter, as in "Who's hotter? Taylor Swift or Kimberly Perry?" This weighty conundrum was bantered about for a good five minutes before the Chief interjected with an even more perplexing query "What about Kellie Pickler? Is she hotter than Taylor Swift?"

Knowing the Chief to be a huge The Band Perry fan I had to Google all of the above country starlets and finally side with Kimberly. Really I could care less especially when it comes to modern pop-country. I'd be more interested in comparing Gretchen Bleiler to Jessica Gysin but at this point it's just something to talk about that doesn't involve work. Well, that and because the conversation revolves around the other half to life's grand equation; The source of love, companionship and physical affection, all of which are in shorter supply than diet coke these days.

Lastly even our homing pigeon knew time was getting short and alighted in the Suez Canal bound hopefully for Venice or Milan or perhaps even Dubrovnik. In his place the natural world installed a cricket that was cause for some head scratching yesterday at five in the morning. Inundated by the Mediterranean's endless stream of Digital Selective Calling alarms on the VHF radio we couldn't quite figure out if it was another alarm or the effect of cavitation on the wall panels but after a little searching we found the bugger squeaking away under the port side bridge door. I still can't figure out how a cricket got on thirty miles off the coast of Algeria. He must have come with the lettuce in Egypt.

Even as I make my way to watch this afternoon thoughts of traveling home will be close at hand. Each time I come up to the bridge and smell a fresh pot of coffee brewing I can't help but think of the back of the airplane. If it's the third mate's watch it smells like Jet Blue but if it's the old man's preferred brew it smells like US Air. At this point I'd drink any coffee with glee if it's on the flight home. 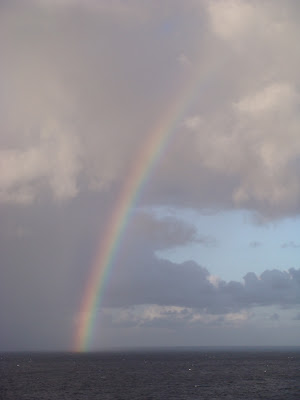