It has taken a while to come to this conclusion but I'm convinced manual labor is one of the reasons I love my job. Office days have their place, charts need correcting and stores need ordering but the days when you work up a sweat and fall asleep with exhausted muscles give a satisfaction unattainable from excel spreadsheets.

Growing up in a town where many of my friend's fathers were carpenters, farmers, tilers and fishermen manual labor was a normal means to a living. Though it took years of landscaping and stall mucking to build up my own tolerance to hard work going to sea has refined my endurance when working towards the brink of exhaustion.

Every vessel afloat has it's own set of physical challenges inherent to the operation. Sailing was hardest in the early morning hours after being roused from a perfectly warm and semi dry bunk to stand soggy on a pitching deck peering into a cold bank of fog drinking tepid coffee and eating wet Granola. A tanker was always challenging but even more so heaving butterworth machines 50 feet up from the tank top while washing tanks under the Gulf of Mexico sun.

Working on deck here is like any other ship; maintenance and repair, lubrication schedules, chipping rust and painting steel, and lots of cleaning. The cargo though differs from ship to ship; container, bulk, petroleum and Ro/Ros have their own unique forms of corporal punishment.

Over the last two weeks along the shores of the Red Sea and Persian Gulf the ship has discharged and loaded cargo in five different ports. Loading is a longer event as each piece is positioned to minimize broken stowage and lashed according to its weight and construction. Cars receive four small tension straps, the same with SUVs. Larger pieces will get a web lashing rated to 5 metric tonnes. Anything over 10 tonnes requires chain.

When loading the longshoremen will lash the vehicles under the direction of stevedores with one of the three ship's officers giving it the thumbs up. As long as the lashings are properly led to the deck fittings, of proper material and number, it's a hands off operation. Any questions about the arranging or securing of the cargo as it is loaded default to me as Chief Mate and unless I'm happy the longshoremen will have to do it again.

As it always works out my department of 9 will end up stowing the majority of the lashings and then clean the holds. On a busy coast this becomes paramount to all other work as a new cargo will fill the holds before the day is through. Often I'll have to call all hands and wake up ABs who spent the entire morning steering, docking and then standing his or her watch. Now instead of sleeping they're back in the holds picking chain up off the dusty decks. They have a hard time complaining within earshot of me though since nobody has had less sleep than I.

Chain is plentiful on a Ro/Ro and is stored in metal bins that can be stacked in racks or on top of one another. We use a three and a half meter length of 11 millimeter chain rated for 7 tonnes working load to secure the cargo. It takes four of these to lash down a twelve tonne tractor and sixteen to lash a 60 tonne bucket loader. The chain is tightened with a binder bar which is tensioned by one to six longshoremen depending on their mass (A rough formula for this is three Bangladeshis laying into a chain equals the tightening power of one South Korean).

Slinging chain is a loud and forceful affair. Done haphazardly it creates a mess in the bins so I constantly instruct the crew to organize the lashings first on deck and then lay them in neatly one by one into the bins. A forklift or two is needed to shuffle empty bins around the hold while other crew remove dunnage and rubber matting. 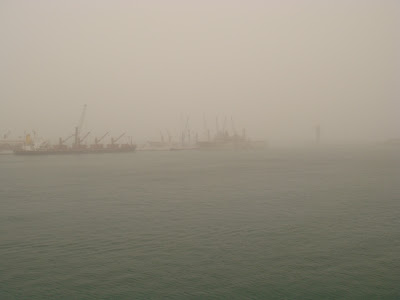 The heat this month has added to the intensity of the job and along with a few sandstorms made working in the holds very unpleasant. Until the ramp is secured after cargo and the ventilation shut down a fine coating of brown dust typical of Kuwait or Saudi Arabia coats every inch on the inside and outside of the ship. Only large air filters keep most of it from making it's way into the accommodations.

One of the enjoyable aspects of working a cargo that requires longshoremen is interfacing with the local stevedores. Unlike a tanker where the only people you meet from shore are the gaugers and dockmen Ro/Ros require a lot of labor. While the crew doesn't have any direct sway over the longshoremen we can talk to their supervisors, the stevedores, if they're not doing the job correctly, a fact I learned the hard way working with West Coast unions.

I do all I can to form good relationships with the stevedores and in the Mid-East this means a lot of hand holding. Holding hands with other men is customary in this part of the world as a gesture of friendship or when you have something important to say . I've seen a stevedore hold the hand of a thieving longshoremen while chastising him but more commonly hands are held in a positive gesture.

Seeing the job the longshoremen were doing in the holds while in Kuwait I would have held the foreman's hand all day. A group of fifteen Pakistani longshoremen were clearing a hold of chain in half an hour and they didn't mind doing it. Thanks to the head stevedore, an Egyptian longing for American made Jeans, he was getting me way ahead of the ball for the next load. All I had to do was promise to bring a pair of size 8 American made shoes back for him which he'd buy off me. 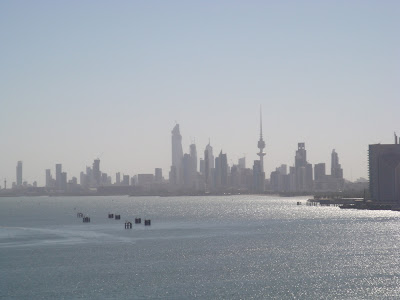 After cargo was finished I took the utility truck down to the dock to read the drafts and noticed another American ship in port. I stopped by the gangway and inquired about a friend who worked for the same company. She wasn't on board but a moment later a familiar face I hadn't seen in six years walked around the corner. The last time we had talked was in college but ten minutes later we were caught up on the last six years I had an open invite to go skiing in Colorado. Maintaining friendships over vast distances and spans of time is a necessary skill for a mariner.

Once we were headed back through the Strait of Hormuz a stowaway was discovered on board living off the bread crumbs left scattered on the deck by sympathetic crew. Two banded legs, one holding a microchip gave him away as a homing pigeon who was soon named Larry Bird. Being so domesticated I was able to pick him up checking for a serial number so we could see where he came from. The only markings, on the microchip and stamped under his wing, is a globe with "PanAsian" written on it. At this point were unsure whether he's in a competition or really carrying a message.

After a little research we learned that homing pigeons will often ride ships for long stretches of time if they're headed in the right direction. I just can't figure out how he knew we were headed west towards the Mediterranean and not south around the cape or East towards the Pacific. Smart pigeon that Larry Bird is. 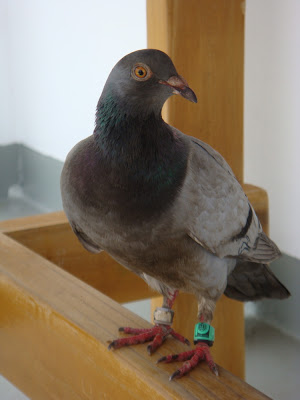