It was my third time on a ship in the Middle East that I remember thinking to myself "If there is one place in the world where I do not want to work I've found it." Between the heat, the sand, the barren landscape and the underlying hostility toward Americans there were very few if any redeeming qualities to make a 21-day sea passage feel worthwhile once the adventure had worn off.

Today I'm more willing to accept the Middle East as a necessary part of my occupation. If this is where the cargo needs to be shipped and my ship is bringing it then so be it. A job is not to be taken for granted and I’ve had a few good stints working in more exotic and romantic locales.

Still it isn't without some reservation that I sign on especially with the situation off Somalia. The following message, transmitted daily by the International Maritime Bureau in Kuala Lumpur is a good reminder of what mariners are up against in these dangerous waters:

SOMALI PIRATES ATTACKING SHIPS OFF THE ENTIRE COAST OF SOMALIA AND BEYOND INCLUDING NORTHERN SOMALI COAST, GULF OF ADEN, SOUTH RED SEA/BAB EL MANDEB, OFF YEMEN, ARABIAN SEA/OFF OMAN, OFF EASTERN AND SOUTHERN SOMALI COAST, OFF NEIGHBOURING KENYA, OFF TANZANIA, OFF SEYCHELLES, OFF MADAGASCAR, WEST AND CENTRAL INDIAN OCEAN AND WEST AND SOUTH INDIA AND WEST MALDIVES. 311 ATTACKS INCLUDING 72 HIJACKINGS HAVE BEEN REPORTED BY VESSELS SINCE JANUARY 2009.

During our recent transit through the Gulf of Aden as we passed by Yemen, the UAE and Oman before entering the Persian Gulf, multiple ships reported being approached by pirates in skiffs. One was attacked 24 hours ahead of us and another 12 hours astern. Both of the attacks involved small arms fire and aluminum boarding ladders and took place in the Strait of Bab el Mandeb. Both ships increased speed and evaded the Somalis.

Referred to as the BAM, the Strait of Bab el Mandeb is a choke point in between Eritrea, Djibouti and Yemen where the Red Sea empties into the Gulf of Aden. Since coalition naval forces have somewhat subdued pirate activity in the Gulf of Aden the pirates operating north of Somalia have been pushed into this narrow and very busy body of water. 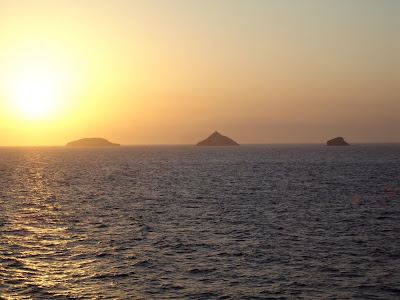 The Haycock Islands viewd from the south.

Reservations aside, working for a company that has taken a proactive security posture operating in high threat regions means that I can sleep soundly at night. The personnel and systems employed in protecting us from Somali hijackings ensure that pirates would meet with failure if they made any attempt to board us.

As continued hijackings prove, this is not the case for most ships. Whether it's the corporate philosophy or more likely the lack of capital for security, the pirates probe hundreds of ships outside the IRTC each week without adequate security to deter them giving the pirates a choice of the most appealing vessels. (The IRTC or Internationally Recommended Transit Corridor is used by escorted convoys and is patrolled by the coalition navy)

Having an uneventful transit we encountered another foe approaching the Persian Gulf and Strait of Hormuz. The heat in the Middle East is a natural wonder better appreciated from the bridge of an air-conditioned ship than inside the cargo holds. Sometimes dry, sometimes humid, the force with which the Arabian Sun beats down on steel ships and weary sailors is without remorse. I keep telling my guys, most of who have decades on me, to drink less coffee and more water until were back in the Atlantic Ocean. The last thing we need is a heat related injury that can become life threatening before you can fill a bathtub with cold water.

The Persian Gulf is a place like no other. The water can be blue and clear or muddy and brown depending on when the last sandstorm rolled through. Visibility is normally limited which is unfortunate as the periphery of the gulf is lined by oil rigs and reefs. Sunsets are mired in a haze of humidity or a shroud of sand if kicked up from the desert by strong sudden bursts of wind.

There has to be some imaginary fence that keeps the crazies penned inside its shallow confined waters. The VHF radio serves as a cell phone, a soap box and a pulpit. As soon as you pass the Strait of Hormuz leaving Oman to port and Iran to starboard the radio becomes a nonstop audio assault on sanity. There’s constant Digital Selective Calling distress alerts, the omnipresent “Filipino Monkey” slurs, barnyard animal sounds, solo vocalists singing in Arabic, Brittany Spears fans holding the VHF next to a tape deck, and more devout Muslims at the dock who key their mic as the Imam ashore calls the people to prayer.

Nonstop action on the radio is mirrored by the amount of near shore traffic. In addition to the world’s navies and shipping traffic fishing boats, coastal traders, and smugglers rush back and forth over the hazy water showing dim lights and a reckless fearlessness of collision. The water is hot too, over 90 degrees Fahrenheit, which makes life ever so miserable for engineers trying to keep their cooling water cold enough to wick unwanted heat away from the engine and generators.

Last night as I watched the Moon, Saturn, Mars and Venus form a diagonal line in the western sky I thought about how many friends, classmates and people I have met work in this part of the world. Some sail on liner services similar to the one my ship is on. Others work on shuttle tankers and containerships that never leave the Gulf. I’m sure we all feel the same passing through the BAM or entering the Persian Gulf. We’d rather be at home having barbecues at the beach or spending the day on a lake but this is where the jobs that we chose bring us, at least it is for now.