A water filled ditch in the middle of the desert is the best way to picture the Suez Canal. If you've never passed by its sandy banks it is not a scenic place. The desert here on the edge of the Sinai Peninsula is hot during the day, cold at night, and constantly blowing a fine grit covering everything, teeth included. 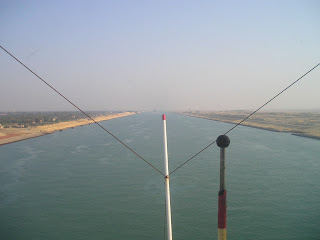 First a little history; Unlike the Panama Canal the Suez has no locks. The Red Sea and Mediterranean are both, surprise surprise, at sea level and therefore connecting them by a 20 meter deep ditch was more a feat of determination than one of engineering.

Construction by a French company began in 1859 and lasted 10 years. The project was heckled in Europe, especially for the use of slave labor but ironically the continent's exploitation of Africa only expanded upon its completion. Once opened the canal allowed for record circumnavigations eliminating the need to round the southern tip of the African continent bringing Europe and America even closer to the rest of the world.

From inception use of the canal was guaranteed for vessels of all nations in times of peace and war including warships. Even during conflict navies are theoretically allowed to use the canal though on a few occasions the United Kingdom, Egypt and Israel have made exceptions to this rule.

Twice during the Arab Israeli conflict Egypt closed the canal to Israeli shipping. The ensuing Suez Canal crisis spurred the creation of the super tanker to bring Middle Eastern oil profitably to market while avoiding the canal. After the Israeli blitzkrieg of the six day war control of the Sinai was taken from Egypt and not relinquished until the Camp David accords which permitted Israel use of the canal once again. Until recently wreckage from these conflicts still littered the nearby dunes. 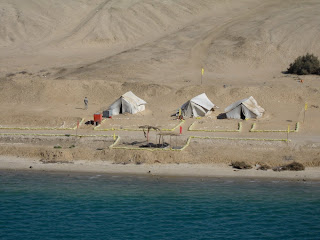 Today an Egyptian military presence is noticeable in the canal. A few war memorials and dusty parade grounds lie along the banks as well as hundreds of tiny fortifications. These comical outposts consist of little more than tents, flags and watch towers usually manned by one or two lonely soldiers. The outposts are placed every kilometer or so.

Our north bound transit began with entering the Gulf of Suez at the Strait of Gubal, not too far from Sharm el Sheik, the European vacation destination known for it's clear waters and free diving competitions. Bordered on both sides by Egypt the Gulf of Suez is narrow and busy with shipping. The western shore is lined by a desolate range of jagged mountains which continue to the northern end of the Gulf at Port Suez. 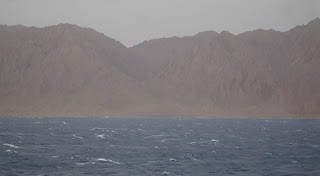 Once within VHF range of the Port Authority each arriving ship is given an anchorage designator that routinely requires the captain to maneuver into the most crowded part of the port and drop the hook precariously close to other vessels. Each ship is also given a number in the line up for the convoy and just before dawn one by one each ship will weigh anchor and embark a Port Suez pilot for entering the access channel.

Prior to any of this happening though a large amount of money has been handed over by the shipowner to the Suez Canal Authority. A single transit can cost over two hundred thousand dollars depending on the ship's Suez Canal Gross Tonnage and her cargo. There are other costs as well. All ships transiting the canal must have on board a Suez Canal light, a line handling team and a lot of baksheesh.

Most vessels carry a Suez Canal light not because it's in any way useful but because if you didn't have one than the vessel would be required to embark a team of Egyptian "Electricians" to install and operate their own light during the transit. I have never once seen this light needed or much less used. Instead we just pull it out of the foc'sle, aim it at the oncoming traffic and leave it unplugged.

Unlike the light the line handlers might be of some use if the vessel was to make fast to the bank which is normal for the second of the two southbound convoys. But again this means boarding another group of Egyptians who inevitably will expect food, sodas and cigarettes and also have a reputation for making off with any unsecured sundries and brass fittings. Therefore my company cleverly hires a tug escort instead which may or may not have enough horsepower and line handlers on board to do much of anything except squeeze a few more dollars out of the ship.

Cigarettes, the other ingredient for a smooth transit, must be plentiful and preferably Marlboro. In the eastern half of the world coffin nails make business happen and the first dozen cartons or so in Egypt go to the port agent, health inspector, security team and launch drivers plus any friends they might bring along for the ride. Baksheesh is so commonplace that to not have the cartons conveniently waiting on the table when doing the paper work or at the gangway for the launches is an affront.

"You have present for me?" is a familiar query from the launch drivers and surely derives from the cultural expectation that you show your guest, no matter who they are, hospitality. Unfortunately in most places I have been, including Egypt, the gift giving goes one way. One time and one time only did an agent actually bring a gift of Baklava and figs for the Captain before asking for his cigarettes in return.

The rule of thumb is the more you can get out of the American ship the better and no amount of whistling, waving, gesturing or demanding is considered shameful. It doesn't stop with cigarettes either. Soda, soap, laundry detergent and candy are favorites and more than one health inspector has finished his inspection of the galley with a trash bag full of instant coffee, tea and condiments. If you have been through the canal than you can relate and you also know that the pilots help to uphold this unscrupulous reputation.

It takes four pilots to travel the length of the Suez Canal. The first pilot will be on board just long enough to get the vessel into the channel and past Newport rock when the second pilot boards at Port Suez. Steadied up at the canal entrance and with a hearty "As-Salām `Alayka" the first pilot is relieved, paper bag of at least six cigarette cartons in hand.

Each pilot is escorted to and from the bridge and safely seen down the boarding latter or gangway. The launch drivers will at times demand their own carton(s) of cigarettes but usually if you wait them out and the pilot becomes impatient enough they'll begrudgingly come alongside to pick him up. A third pilot is taken at Ismail, the half way point, and a fourth for the Mediterranean entrance at Port Said.

The pilots vary widely in their grasp of ship handling and English. Some are good, some all right and some absolutely hazardous. I have had pilots who appeared bent on running the ship aground when the captain wasn't looking. Though their ineptitude was probably unintentional had it not been for watch officers quietly countermanding rudder commands than we likely would have gone aground. Why not voice our removal of the conn from the canal pilot rather than secretly taking it away for a moment or two? Because it would likely have caused an escalation of voices and egos while greatly increasing the number of cartons needed to smooth things over before an international incident occurred.

Since the passage takes the entire day the more devout pilots will observe at least one call to prayer during the passage. With the mate or Captain conning the pilot will remove himself to a corner of the bridge and pray while facing in the direction of Mecca. If we are passing by any of the Mosques along the canal than the Adhan or the call to prayer can be heard being broadcast from each minaret. 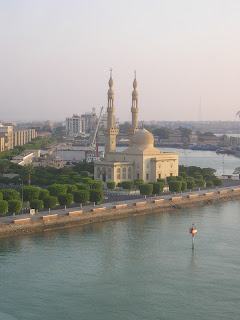 Once both south bound convoys are astern the northbound group has a straight shot out to sea passing Port Suez. The final pilot is sent off with a full belly and another brown paper bag of cigarettes and we're back out to sea.

It's ironic to think of how many times I've "been" to or rather through Egypt and not once stepped foot on land. It is not my intention to generalize Egyptians based on the behavior of pilots and other employees of the Suez Canal Authority. It's just that they're the only Egyptians I've ever met. Except of course the ubiquitous Charlie Brown.

Besides getting a sun burn and sand in your coffee Egypt is also a good place to find a camel skin jacket of questionable quality and a "Papyrus" painting on pressed banana leafs. It's also a great place to rid the ship of old mooring lines and scrap metal and one man can help you with all of these things, Charlie Brown. Charlie has been calling on ships in the canal for decades now. One captain I worked with would receive telexes before we left the U.S. inquiring what services he could provide. They had known each other for thirty years at the time.

Charlie is a rather rotund man, presumably nicknamed after the cartoon character. Along with two sons who do most of the heavy lifting he has been providing ships with Egyptian knickknacks for a long long time. All of my souvenirs from Egypt were acquired from Charlie while anchored in Port Suez. If there is something you want that he doesn't have on the boat then he'll have someone pick it up and meet the ship with it on the other end of the canal and he always has a present for the Captain for letting him sell his wares on board.

This last trip through the canal was a smooth one. In between bridge watches I spent the morning on the bow standing by the anchors. Traveling at 9 knots, the canal has a speed limit to prevent bank erosion, made me feel as if I was riding a bicycle through the sandy streets passing by simple houses, small farms and palm trees.

I passed a beach full of children jumping off docks into the canal, fishermen hauling nets from the canal and ferries moving tanker trucks and people from side to side. It became apparent just how central the Suez Canal is to life in this part of Egypt and the nation as a whole. Not only is the canal a necessity to the international shipping industry, it's a major source of income for the government and the Egyptians who work on it, bribes included.
Posted by Deep Water Sailor at 03:58