What a week. I can honestly say that I haven't been this happy, or thankful, to be at sea in a long long while. My reasons are many but center around making some hard decisions, sticking with them and finding myself in a position which I have been laboring and waiting for for the better part of the last two years. Naturally not everything is as was hoped for but as one wise man said, "If you want to hear a good laugh go and tell god your plans."

I arrived at work a little more than two weeks ago, or rather; I arrived in a Muslim country with no sponsor for my visa which, meant I was not going to be allowed into the port. The immigration hick-up was an oversight by the crewing department that almost caused me to miss the ship.

Luckily a smooth talking Kuwaiti Port Captain, and graduate of California Maritime reasoned with a few slightly reasonable Kuwaiti army officials to have me admitted into the port with only a tourist visa. When we pulled up to the second of three military checkpoints on the way down a refinery lined road the guard, as was translated to me by my friend the Port Captain, wanted to search my bag.

"But he doesn't have any Alcohol" my friend said. I had all ready been through this at the airport with a bottle of maple syrup almost cracking it open and taking a swig to prove it wasn't rye whiskey.

"No, he is not a Muslim, he is different, we need to check his bag" was the reply from behind a pair of chromed aviator glasses, Uzi in hand.

After a few more reassuring sentences the guard reluctantly let us pull away, a lump leaving my throat. Not because I had any contraband but because any other issue keeping me from walking up the stern ramp would have just about killed me. It had been a long 8 months waiting for this particular job.

Once on board I was quickly overwhelmed by two presiding factors on the new boat. First the ship was absolutely massive. The decks were stronger, the ramps bigger and the engine faster than anything I had ever worked on. Secondly everything outside the engineering spaces were going to be my responsibility in a week including the holds and the cargo filling them, the deck machinery, the deck crew and all the paperwork that goes along with it.

Luckily the captain had swung a deal with the office to get me on well in advance of the mate being relieved. Therefore we had from the Persian Gulf to the Suez Canal to sift through as much on board as possible providing me with a running start to my new job. It also gave me time to settle in with the crew and appear a little less like the clean shaven academy grad only six years out of school and more like the bearded, bow legged, salt water pissing mate I'd someday like to be.

That crew, which as a matter of fact shall be the subject of another blog post, is just about all you could hope for from a union hall. The only person I knew on board much to my delight was the Steward. Renowned on board car carriers for Sunday morning crepes and never ever ordering the reviled and detestable oxen-tail, he and his equally talented cook are affectionately known on board ship as "Feeders". As in, "Boy, this one's a feeder for sure!"

Adding to my merriment my co-workers are about as socially normal as sailors can be. Top to bottom it's a great group of guys. I was apprehensive about walking into a frat club I wasn't a member of or a worse, a funeral procession, but everyone is upbeat, accountable and among the officers likes to make just enough fun of one another to keep things interesting. Even the Captain is the brunt of dinner table jokes and throws it right back at you with a thick South Portland accent...guy.

One of the biggest differences between this Ro/Ro and other car carriers I've worked on is the level of technology. No not for navigation or cargo handling or engine room automation. Not even for coffee making. The technology I speak of is something the average American family is now spending over a thousand dollars a year for; Internet. Yes that all too taken for granted modern day convenience has finally started making it's way into the budgets of reluctant American shipping companies and I have to say it is the best morale boosting event since the introduction of the foc'sle card.

From the comfort of my cabin I can now pay my bills, check bank accounts, update this blog, Skype friends and family, listen to Public Radio and send out links to annoying you tube videos about New Hampshire anytime I want. I only think that it costs the company a fixed rate of around $5000 a month which is just about what we pay for fuel for 12 hours of sea speed.

My schedule at work is something else for which I'm extremely thankful to have had changed. For the last five years I have predominantly worked the mid watch either waking up at midnight for a four hour watch breaking my 8 hours of sleep in two or working from midnight through noon and then some. I now stand the traditional four to eight which means I rise before the sun does and sleep after it has set. I love this watch because I'm finally back in sync with nature and find it so much easier to get adequate rest even if it's only six hours of sleep a night.

It also means that I am witness to the most stunning beginnings and endings to days there are. A few nights ago I was alone on the bridge watching a slow sun set and became absolutely awestruck by how lucky some are to be sailors. All the stress of new responsibility and future challenges melted away as I remembered that it was my own decision to take myself out of society and into a world where instead insisting the earth rotate around you, you purposefully rotate around the earth, encircling it day after day in the most elemental of places known to man. 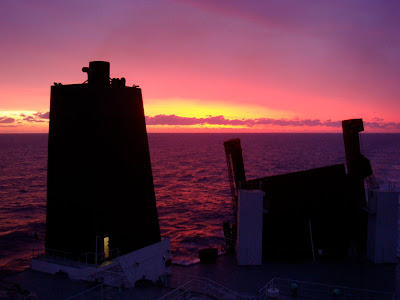 That moment on the bridge wing in the eastern Mediterranean watching a Beaufort Force 8 tear at the glowing ocean reminded me of a song sung by Gordon Bok. As I dredged the words up from my memory I couldn't help but knowingly smile. How happy one can be with a long sea passage ahead when you're mind is in the right place.

Barney Buntline turned his quid and said to Billy Bowline, "God help how I pity all unhappy folks ashore now."

"Poor creatures how they envy us and wish as I've a notion, for our good luck in such a storm, to be out on the ocean."

"And very often have we heard how men are killed and undone, by the overturn of carriages, by thieves and fires in London."

"We know what risk all landsmen run from noblemen to tailors, then Bill let us thank providence, that you and I are sailors."
Posted by Deep Water Sailor at 13:29