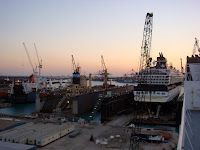 Traveling with no expectations is traveling at it's best. Spending two weeks of exhaustion in the shipyard has definitely limited my expectations. It's a rare occasion when I'm this busy at work to get off the ship and out of the yard so when I finally did make it to the beach last night every sight, smell, taste and Soca beat was better than I could have imagined.

The yard period began four days ago on a very windy morning in the Florida Straits. We maneuvered around the pilot station for six hours before the Bahamian pilots, obviously keeping strict island time, were ready to board us from a tossing tug. While we were waiting the a small container ship grounded on the beach as we watched and listened to the event unfold on the VHF radio.

The little ship had just left the shipyard the previous day with new paint and was at anchor in a perilous anchorage to windward of a lee shore near the harbor entrance. The heavy current must have caused the anchor to drag resulting in a beached ship and frantic sounding captain who was not the least bit reassured by port control's very laid back emergency response.

We docked in what could be confused for a vacant parking lot along the water and began making preparations for the following day's onslaught of yard superintendents and laborers. Shipyards are when ships get large repairs and maintenance accomplished plus undergo all pending regulatory inspections. It's where the ship gets all the things done to it that normally can not be done with cargo aboard and has therefore been extremely busy and exhausting.

Four day's into the yard I was in bad need of a few hours away from work, sleeping not included. I knew I would be even more tired the following day, and I am, but finding a place to vent stress can become a necessity and I have learned that when given the chance it should not be passed up.

After befriending several of the workers I started to get a sense of the Bahamian identity. There really is no rush on the islands. There is always another day tomorrow when something can be finished up, or if you never got around to it in the first place, it can be started. While this mindset was proving to be a little frustrating in the yard once comfortably zipping down the highway on the left side of the road I was immediately relaxed.

My cab driver, who went by the name of Uncle, Cow or Mikey, spent as much time telling me to be relaxed and that he could "Get you anything you need mon" as he did explaining his life on the island to me. While I wasn't interested in most of the things Uncle could provide me I was curious about the life of a Bahamian, a mere 90 miles from the similar climate but very different world of South Florida USA.

Uncle was the youngest of forty brothers and forty sisters, all of the same father. He therefore new each and every person on Grand Bahamas. "How many people on the island?" I asked. "Only sixty thousand mon", he replied in all seriousness.

Uncle took an immediate liking to me since my destination, the Wednesday night fish fry on Taino Beach, was his destination as well. Knowing that I had never set foot outside the shipyard gate he had to know how I had heard about the biggest local midweek scene on the Island. I explained how the first thing my friends at the shipyard had told me when I inquired about nightlife was the fish fry. So off we went, bombing down the road in a Toyota mini van, Uncle all the while trying to pick up as many sun burnt tourists on the way at three bucks a head.

We pulled up to the beach and not fifteen feet above the high tide line was a bar with thatched roof and rickety wood dance floor but not a door or window in sight. Next to the bar was a smoky kitchen also thatched in palm fronds occupied by the busiest Bahamians I had yet to see. Thirty people waited in a never easing line of hungry tourists and locals. The ladies frying chicken took my order and fried an entire red snapper right in front of me, piled the plate high with rice, black beans, potato bread and mac and cheese. With a Kalik beer I was a just another tourist until Uncle found me an began introducing me to everyone he knew. 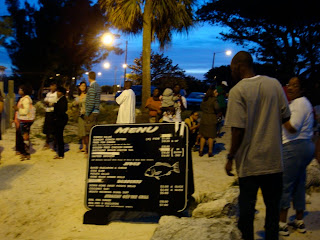 We started with the police, a male and female officer in smart blue uniforms with red banded hats in the English style. Next we met numerous cousins who all had businesses or were some way involved in the island economy. He pointed to one well dressed Bahamian and said "He eats fish heads for breakfast."

"What the hell does that mean" I asked. "It's like if instead of eating grits and conch for breakfast you have boiled grouper instead. Like in the States you have eggs and pancakes mon but if you were very well to do than you could eat steak and salmon every morning."

By saying that this gentleman had something expensive and locally regarded as delicious for breakfast, fish heads, he was very well off. Boiled grouper was just about the most decadent thing one could have on the island for breakfast so I acted impressed by the guys status.

Once the sun retired and I had my swim off an abandoned dock down the beach the full moon rose. I went back to the bar and began mingling with the patrons. I was introduced to a coconut rum which when mixed with a little orange juice was far better than any Bahama Mama. The "Gollywash" though was my favorite drink; a simple blend of coconut water, my favorite liquid next to coffee and sleepy time tea, with cheap gin. This went down easily and being mindful of returning to work in a few hours I laid off the hard stuff and spent most of the night working up a sweat dancing to the DJs mix of local and American club tracks. 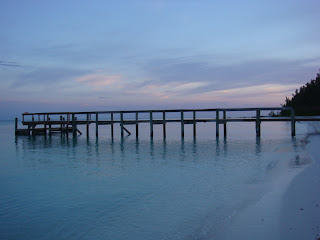 As the night went on the tourists and Conchi Joes, that is tourists who have become locals, began to wane as the islanders began to dominate the dance floor. The American tunes were fine, though I had gotten my fill of them in Asia this past winter, but when a local musician would come across the amplifiers the crowd would really get going. Uncle didn't dance too much given his prestigious fish head girth but he was always nearby to offer me advice on pick up lines and who to go dance with (Though a few nights later he would prove show up my sophomoric dance moves)

After a couple hours of dancing sore leg muscles loose I retired to the glassless windows and watched the full moon shimmer on a flat calm Bahamas channel. We had passed right by this beach four days earlier and I remembered several times before that when I had looked over at this thin strip of white and green that is the Bahamas and wondered what life was like on this often ignored and a little run down island. Now I was getting to see first hand amongst the locals and that circumferential feeling of getting to know someplace only after navigating around it floored me.

On the way back to the yard Uncle had to ask for ten bucks in addition to the cab fare I paid him for his services. His kids needed five bucks each for school lunches and as we pulled into their driveway it was obvious that he and his wife or girlfriend were no longer together. He slipped the colorful Bahamian bills into the mail slot and then got back in the van. Tired and hungry he drove me back to the gate. He offered to pick me up anytime and that we could go anywhere on the island. Aiming to stimulate the local economy while pleasing visitors was his main mission and he had not let me down.
Posted by Deep Water Sailor at 20:49