Harnessing the power of coffee, I'm sitting in between two Pratt & Whitney PW 200 turbofan jet engines struggling but determined to get all my thoughts written down. Bloody exhausted; that’s how I feel after two weeks in south Florida. What I pictured as a relaxing series of training courses for work intermingled with a little scuba diving and beach barbecuing turned into an all out social extravaganza that left me lacking sleep, solitude and sobriety. No sense in complaining though, I was having such a swell time that I almost extended my mini vacation down south. A meter of new snow in the White Mountains dissuaded me however and so I'm headed home to get into my foul weather gear and spending a few days riding chair lifts. 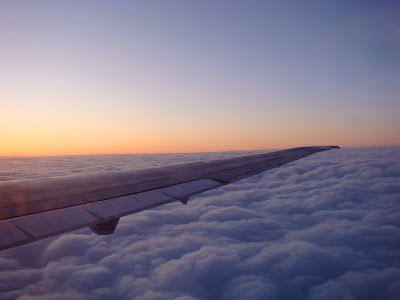 As per usual it’s been a busy first six weeks of vacation. Perhaps my coping mechanism for feeling cut off from friends and family when I’m at work but I routinely over schedule my vacation in order to visit as many people as able by car, plane or any other conveyance necessary. Maintaining a social network of friends has always been something I have expelled a considerable amount of energy doing. It certainly has it’s rewards as I get to watch the children of friends grow and celebrate birthdays and keep track of what amazing stuff other mariners I know are up to.

The training courses, a constant theme for merchant mariners, were a mixed bag. I have spent months in union sponsored training since finishing my bachelor’s degree and receiving a third mates ticket. Under the International Maritime Organization’s licensing structure in order to have upgraded from Second Mate to Chief Mate I was required to take several months of upgrade courses. The cost of attending these courses is akin to a year’s tuition at a state university and luckily for me was inclusive with my union benefits.

For any aspiring officer outside of a union or without company sponsorship the courses are prohibitively expensive and represent another roadblock to advancing up the ladder, especially for hawespipers like my younger brother. At least the quality of instruction, most of which is review for anyone recently coming out of a maritime academy, has been good. Since I wrapped up my upgrade business two years ago I now mainly attend either renewals like radar and breath alcohol testing or company required training such as Fast Rescue Boat.

This time around I had the chance to spend five consecutive days in a 360-degree full mission bridge simulator. The course, designed for masters, is solely focused on ship handling and was both challenging and humbling. I was a little disappointed that my performance was far from flawless but having the chance to dock, undock, and maneuver multiple ship models in one of the worlds most sophisticated (And expensive) maritime simulators was incredible. 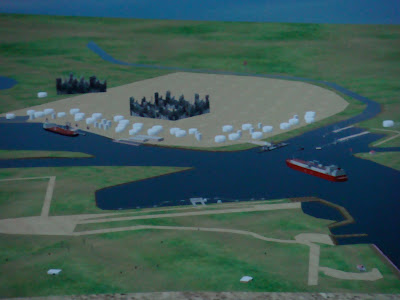 One of the benefits of simulator based training is the ability to spatially orientate oneself prior to commencing an exercise. Pictured above is the port of Freeport Texas where we were tasked with docking a 100,800 DWT LNG tanker. By shifting our vantage to a birds eye view it enabled us to see just how much room there was beyond the vessel for turning within the basin.

This model is also a great example of how a pilot organization can use simulator "Modeling" to improve the design of ports. The pilots from this particular locale recommended new depths and widths for the channel and turning basins to the Army Corp of Engineers based on their experiences with this simulator.

Providing pilots the ability to test different harbor arrangements with multiple ships in all kinds of weather conditions prior to beginning large and expensive dredging or construction project is a huge benefit. It is also a revenue stream for the simulator where as providing two mariners five days of non stop simulation surely was not a big money maker. 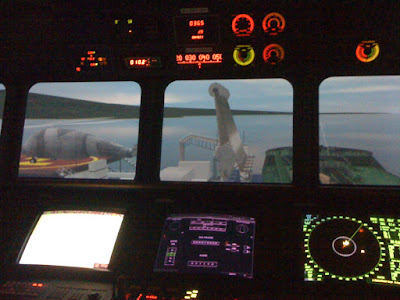 Above is a view of the bridge console complete with all the instrumentation needed for ship handling. In this case we're bringing a 40,000 DWT tanker alongside the berth at Drift River using an offshore anchor to control the bow in a four knot ebb current. The use of the anchor in ship handling was a foreign concept for me but a tried and true method for our instructor, a retired ARCO Captain.

Since two of the students never showed up to the first day of class it was only myself and one other student, a classmate from college, receiving invaluable pearls of wisdom from a former master. No matter how sophisticated the simulator it would have done little good for us without the instruction, feedback and criticism of a mariner who spent his career handling the worlds largest crude oil tankers afloat. After handling a 150,000 DWT VLCC in Long Beach harbor docking an 11,000 foot Maersk Container Ship in the port of Miami didn't seem so difficult. Especially with the help of two very large tractor tugs and a 3000 horse power bow thruster. 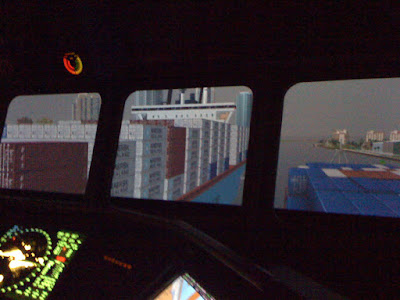 The second week of courses began with a CPR/AED re-certification followed by a Medical Person In Charge refresher. Towards the end of the week a mind numbingly boring drug test collector and breath alcohol testing certification left me loathing power point presentations.

The medical refresher course was excellent and very necessary having received no additional advanced medical training since my initial PIC course in 2004. While I have had a little practice at suturing and at diagnosing the rare appendicitis the insertion of catheters, nasopharyngeals, gastric tubes and I.V.s are all skills in need of constant honing. I would never want to feel rusty at this stuff when a sailor is entrusting me with medical treatment prior to or in lieu of evacuation.

Now that I have a new stack of embossed certificates and a few more frequent flier miles I'm reluctant to spend any more of this particular vacation in the classroom. I'm pleased to be headed for home with no obligations or plans on the horizon. I'm doing my best to take a lengthy break from work to focus on some of the aspects of life I haven't paid enough attention to over the last couple of years. While it does feel strange to just lounge while several of my neighbors are unemployed or just scraping by it feels good to simplify the stuff of life that sustains me.