One thing I love to do is spotting ships, boats and other means of aquatic conveyance . Just like a birdwatcher with a zoom lens focused on a nest of eagle chicks I've whiled away many a watch staring at some of the worlds largest man made structures. While you could fill pages arguing over the aesthetic merits of modern ship structure versus traditional I find a beauty in the utilitarianism of today's seagoing vessels.

Working on some of the arguably ugliest car carriers around may have played a role in my appreciation for ships with attributes other than raked stacks, a cutter bow and curvaceous fantails but still, if the industry interests you than you might enjoy the following pictures. 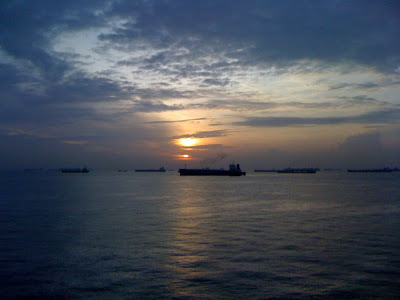 The entirety of my last job at sea was spent either on the hook in Singapore's sprawling anchorage or maintaining position in the Singapore Strait to repair sub sea fiber optic cables. This meant ample time with little more to do than watch concerning traffic and snap photographs of some of the more interesting vessels that passed us by. The above photograph is a typical sunrise over Indonesia and one of the worlds most crowded anchorages. 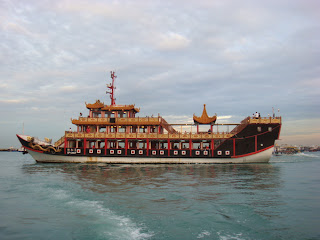 This boat would circle us every evening as curious Singaporeans looked on from their tacky dinner cruise experience. A steel hull with fake cannon ports and a dirty exhaust stained transom, this motorized replica of a Junk never inspired me to buy a ticket. 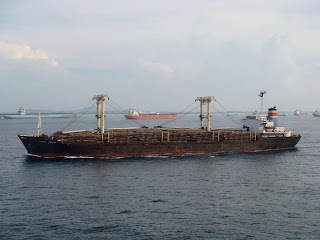 A deck cargo of rough cut lumber makes this Russian stick ship look a little tender. Chained athwartships the lumber could very likely be coming from Russia's Kamchatka peninsula. I would see at least four of these vessels pass by in a week. 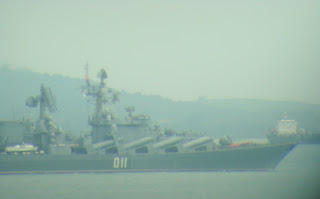 Another Russian vessel, this naval ship was circling Singapore while Vladimir Putin was visiting last October. Those long barrels on her deck were designed to fire missiles at the American ship pictured below. 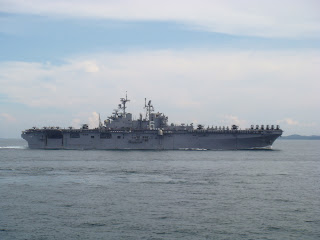 A floating helicopter base this U.S. Naval vessel was part of a large fleet that called on Singapore late in 2009. 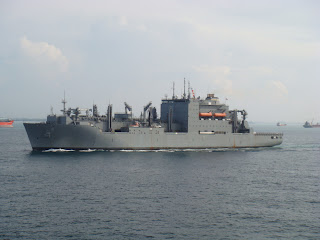 Another American naval vessel, this Lewis & Clark T-AKE Class vessel is the newest installment in the Navy's underway replenishment Combat Logistics Force. A classmate and good friend serves as a cargo mate on board this very ship and was just returning from an eight month humanitarian and goodwill mission to the South Pacific. 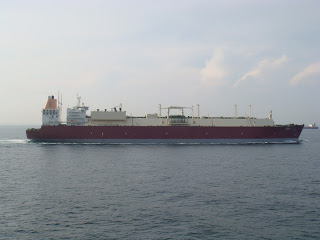 This Q-Max LNG tanker passes by in the morning hours on a dedicated run from the loading port in Qatar (Hence the Q in Q-Max) and a discharge port in LNG hungry South Korea. The newest design in liquefied natural gas transportation, the Q-Max class vessels were built in anticipation of a boom in LNG consumption to carry 266,000 cubic meters each, enough gas to power 70,000 homes in the U.S. for a year. Yet as the economy has slowed and demand for imported natural gas fallen word on the street has it that some of these 7 brand new ships are being laid up as soon as they're launched. 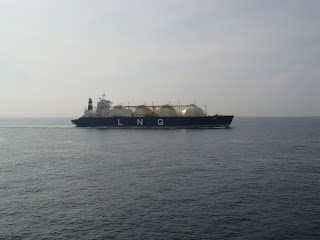 Compared to the membrane tanks used in the Q-Max LNG carrier these spherical tanks are representative of the old technology in LNG transportation, though when I say old I mean since 1964 when the first LNG tanker, Methane Princess was launched. 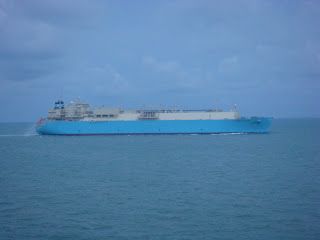 Another modern LNG carrier this one sporting the distinctive Maersk paint job can be scene with fire hoses trailing a mist astern, obviously an anti-piracy precaution. 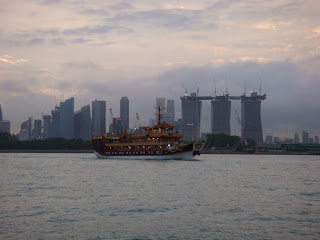 The dinner cruise sets out from Marina South Pier with the skyline of Singapore behind. The three towers to the right are currently under construction to become Asia's most spectacular entertainment destination, Marina Bay Sands. The tops of the three buildings are to be joined by a ship like structure complete with rooftop gardens. While it would be free for you or I to have a go at the roulette tables here in a year's time it will cost each Singaporean $100 to enter. 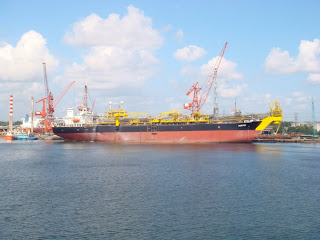 A FPSO or Floating Production Storage and Offloading unit is passed by in Johor on our way to Sembawang cable depot. This converted tanker will be moored offshore in an oil field to receive, refine and store oil. 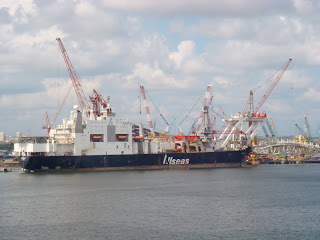 This pipe laying vessel, one of the largest in the world, is also seen in a Malaysian shipyard. Ships like this will be necessary to install the sub sea pipelines to link oil wells, FPSOs and all the other components in the booming offshore oil and gas industry. 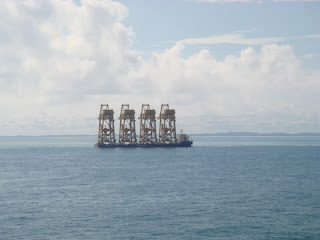 A heavy lift vessel loaded with four towering container cranes passes precariously by. Surely welded to her deck weather routing couldn't be more crucial for any other vessel. We saw a lot of east bound cargo cranes. 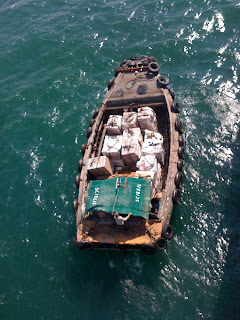 A "bum boat" comes alongside to deliver stores. These strangely shaped motor boats were busily plying the near shore waters of Singapore to deliver food and spares to the thousands of ships at anchor. A design that probably goes back a thousands years in these waters must prove seaworthy despite the ingress of water at the bow and simple welded pipe tiller at the stern. 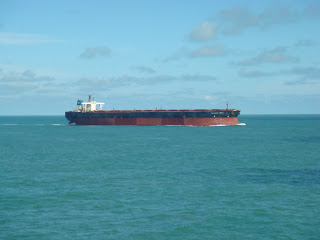 A capesize bulk ore carrier passes by in ballast westbound. With a cargo capacity of at least 175,000 dead weight tonnes this ship is too large for the Panama canal and the Suez canal when loaded. She must therefore transit around the Cape of Good Hope or Cape Horn when passing from one ocean to another. 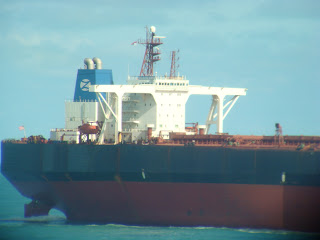 This zoom of her house shows just how massive each component is from the stack to bridge wings to the rudder. Capesize bulkers range from 150,000 DWT to 400,000 DWT. 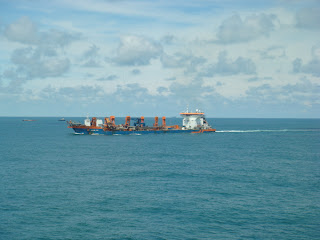 This dredge can be seen bound for sea to dump spoils dredged from the bottom of Singapore's constantly evolving harbors. This dredge, owned by a Dutch company, the undoubted leader in dredging technology, was operating non stop passing by us at least twice a day on her way out and then back in to Singapore. 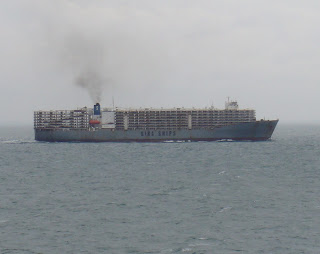 One of my favorite ship pictures is of this cattle ship. After inspection with binoculars it was obvious that she was void of all livestock and most likely destined for a ship yard in Malaysia for some maintenance and new deck paint. I couldn't imagine how many head of cow or sheep she is capable of carrying nor the stench with a following wind but really, how many people have even contemplated such a vessel much less seen one? Her crew must be size able as well to feed and clean so many pens though I imagine it is mostly an automated operation. 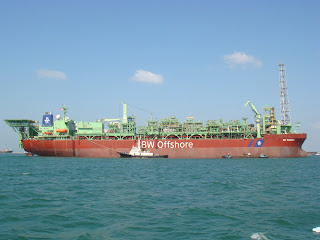 A new FPSO that appeared more like a city as we passed her close abeam while coming into anchor early one morning. The mass of piping looked like any other oil refinery in Texas City except it all is designed to operate offshore. I wonder how a ship like this is navigated to it's destination with absolutely no visibility from the still existent bridge. 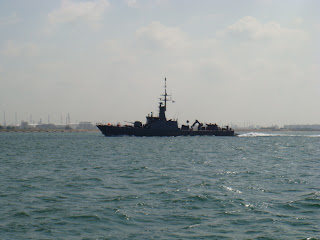 Singapore's navy had a large presence throughout the duration of my hitch. What were the worst pirate waters in the world are now mostly tame within the Singapore and Malacca Straits due to a joint anti-piracy effort between Malaysia, Indonesia and Singapore. 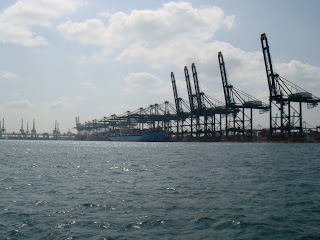 Big is all I can think here. I snapped this picture on my way ashore after paying off. The western half of Singapore's southern shore sports the largest container terminal in the world. These absolutely massive gantry cranes service the worlds largest container ships.
Posted by Deep Water Sailor at 11:19