Solstice in the North Sea

It was a long morning on watch in what seemed to be interminable darkness in the southern portion of the North Sea. I couldn’t help but work out the time of sun rise and sun set on this, the shortest day of the year. I’m sure this is to blame for my feeling like a zombie come eight o’clock just as the sky was beginning to lighten. I can’t imagine how it is for the crews of the feeder ships and work boats that never make it out of the North or Baltic Seas all winter. They must be conditioned to the long nights and short days where as I depend on the sun’s timely arrival to get a boost of energy to finish off my day.

You know you’ve reached the English Channel when all of the FM radio weather reports are tailored for sailors and goes something like this;

By using only succinct marine terminology the BBC broadcasts the weather for the entire nation hourly informing mariners of the wind condition, precipitation, visibility and short term trend in short order. It reminds me how much of a seafaring nation the U.K. remains to be. Of course at the top of the hour and the end of the forecast they have to play “God Save the Queen”, the tune of which is obviously a total knock off of our ancient and most solemn patriotic hymn “America" also know as "My country, 'Tis of thee."

Our passage through the Strait of Dover was typical for rush hour on a marine highway. The only place I’ve ever sailed that was more crowded with ships than it is here is the Strait of Korea where orderly use of traffic separation schemes, or sea lanes, is not maintained and no fisherman speaks the English tongue. At least in the English Channel in between Dover and Cap Griz Nez the traffic is constantly being monitored by a Vessel Traffic Service. Utilizing land based radar stations to monitor the flow of vessels 24 hours a day the VTS acts just like Air Traffic Control does at any airport. 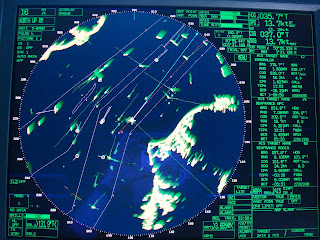 (Disclaimer: I'm not the one using relative trails in this ph0tograph, a practice I do not endorse)

The main difference with a VTS is that they do not assign flight patterns to ships instead relying on each vessel’s bridge team to navigate through their surveillance areas safely. If a dangerous situation emerges, perhaps when a panicky third mate does something brash without calling his captain as a Dover/Calais ferry making 24 knots cut’s across his bow, the VTS will intervene informing both vessels of their impending doom.

The Dover Strait Coast Guard, who maintains the English side of the Traffic Separation Scheme, also has a reputation for mailing fuming letters to shipping companies who’s vessels were not paying attention to the collision regulations. They nailed one former mate’s ass to the wall at my company for standing on with a crossing ferry when he should have been giving way and not replying to the distressed radio calls from the approaching vessel.

We arrived in Germany after a ten day crossing, which all hands agreed had seemed laboriously long, just after dinner and had a straight shot through the lock. We swapped out places with an outbound car carrier and moored snugly against the quay with the wind fortuitously on the offshore side. Given the immensity and shape of the ship, a wind blowing us off the dock is cause for keeping the bow thruster warm all night and little sleep for the Captain.

Once the ramp was down a mass exodus occurred in which all the day workers trounced off in a pack intent on beginning their own financial bailout plan for the bars of Bremerhaven. You wouldn’t think there was a slowdown in the E.U.’s biggest economy though after surveying the docks. Rows and rows of trucks, busses, cars, heavy machinery and all kinds of other brand new machines span from one horizon to the other. Not to mention the worlds longest (Not the largest) container quay is still piled with boxes which are hurriedly shifted from ship to stacks to ship by spindly legged carriers 24 hours a day.

Tomorrow will be Christmas Eve and the Captain has arranged for the American Seaman’s Club to open for dinner. Out of the goodness of their hearts the owners are going to make Christmas Dinner for all attending hands and the Captain is going to pick up the tab on all the drinks. I’ll be absent from the festivities instead sleeping before my mid watch and more importantly, attending to my Santa Claus duties in the early morning hours. The Captain has tasked me with putting out the dozens of welfare gifts donated by seaman’s mission all over the East Coast containing toiletries, pens, envelopes, stamps and hand knitted caps and stockings thanks to grandmothers all over the greater Baltimore metropolitan area.
Posted by Deep Water Sailor at 12:34