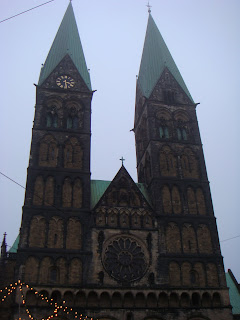 Good milk is cause for celebration for anyone who loves their coffee the color of a brown paper bag. Having a store of fresh dairy in the bridge ice box is a blessing and the milk in Germany is on the top of my dairy list rivaled only by Oakhurst, a delicious hormone free brand known for fattening my brothers and I up at young ages and putting the fire out in “Burnt Trailers” all over Maine (Allen’s Coffee Brandy and whole milk that is).

I mention the “millche” here on account of its necessity in tempering the espresso shots it will take to keep me awake after yesterday’s cultural sortie up the Weser River. Choosing to go ashore after a full day’s work over sleep is a hard decision but this morning I’m left with no regrets. The shuteye I missed out on was well worth the hour long train ride out of the port and into Bremen, a city of 550,000 people on the Weser River. Together with my counterpart in the Engine Department and the always socially inclined cadet we made our way to the Christmas Market in the old city center.

We spotted the twin spires of a massive (Lutheran) church that had it’s origins in 800AD and followed them to the market square wherein hundreds of vendors had erected a temporary village for the month long Christmas Market. Glittering with holiday decorations and the sound of caroling street choirs the mood was pure Christmas everywhere you looked. There was a Santa Claus reading holiday fables to a dozen children in front of a North Pole back drop next to shops selling thousands of hand made wooden Christmas ornaments. Christmas trees were 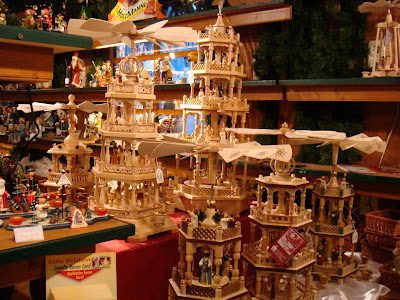 hoisted on top of roofs and utility poles and a huge fir had made it into the Church waiting for tomorrow night’s lighting service.

There was traditional German holiday fare being grilled, fried, roasted and brewed and happily consumed with complete abandonment by the young and old. The 14 inch Bratwursts were cooked over a huge circular grill and served with a comically small roll that wouldn’t accommodate a burger. This served as a grip for dipping the sausage in hot mustard. Potatoes were fried as regular straight cuts or mashed into a cake and eaten with different sauces. There were crepes and candied nuts and gingerbread galore. My favorite meal though was a bowel of garlic oiled and dill sauced mushrooms for only 2 euro.

To compliment the affordable food were twenty or so glühwein stands. This magical spiced red or white wine beverage was served hot in a mug which we were free to walk around the city with. The best drink was a variant of gluhwein whose unpronounceable name included the words fire and bowel. Cooked in huge copper pots, a brewer would flash a pan of white rum into blue flames and then carefully pour it into the kettle giving a boozy and sugared kick to the sweet red wine. After a few mugs of this the chill winter drizzle no longer seemed to matter as much. 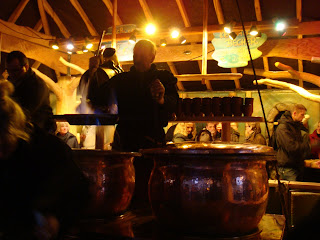 There is something wonderfully satisfying in getting a grape buzz on as you gaze up at a 600 year old town hall (Now a UNESCO world heritage site) surrounded by crowds of merry Germans whose holiday merrymaking predates the Hanseatic League. Imagining the generations of Germanic peoples drinking hot wine in this square around Christmas time before Christ had even come into the picture is true pleasure. These rare moments when you’re whisked away from work and dropped off in another country and another culture have to be appreciated because it just doesn’t happen often enough. 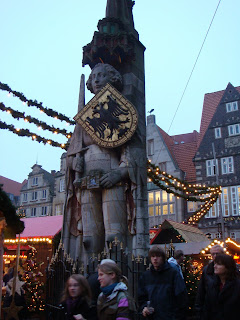 A statue of ROLAND bearing Durendart, the "sword of justice" and a shield decorated with an imperial eagle.
Posted by Deep Water Sailor at 12:44