Snakes, oil and the sea 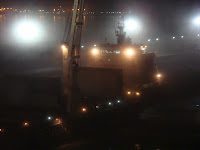 When the hustle of arriving, departing and working cargo in port is left astern the monotony of seafaring can be quick to set in. Though the work list remains long and there is always more to be done than time allows the tantalizing thought of home waiting over the horizon lends to ever present feelings of expectation and impatience. I'm doing all I can this week to fight those sensations and remain focused on the task at hand but it's a challenge when the first snow is falling in New England and Christmas will, for the third year in a row, be another day spent at sea.
Departing the Arabian Gulf marked the half way hurdle of the trip, at least in a geographical sense. The coast was an easy one with lighter cargo volumes than hoped for and a sensible port schedule. Our last berth in Kuwait happened to be adjacent to a collier discharging her sooty cargo onto a conveyor belt. The windward cloud of coal dust did a fine job of coating the ship from bow to stern requiring that the first three days at sea be solely committed to washing the entire vessel down. I had the day men and watch standers on overtime use fire hoses to remove the soot and then power washers to rinse the corrosive salt water off.
While the deck department took care of washing the car the engineers pumped our gas. The only stop after passing through the Strait of Hormuz on the way to the Suez Canal was at what has to be one of the world's largest gas stations. On the Indian Ocean side of the U.A.E. the ports of Fujairah and Khwar Fakkan supply bunkers to thousands of ships every month. While there is a port the majority of vessels wait at anchor for the bunker barges, small tankers commonly seen in the waters of Europe and Asia, to tie up alongside and deliver the fuel. It's a popular spot for stemming your fleet as bunker prices are a better deal here so close to the source. 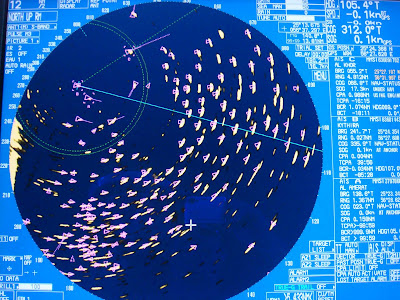 The anchorage here is packed.
Anchoring off the lofty, rugged, and brown coastline of the Arabian Peninsula in water 90 meters deep requires a substantial amount of anchor chain. A merchant ship typically carries 12 to 14 shots (A shot is 15 fathoms, a fathom 6 feet) of chain in each locker, port and starboard. Safely anchoring in 300 feet of water meant paying out ten shots of chain which still only provided an anchor chain to water depth ratio of 3:1 whereas a scope of 5:1 is preferable. Once the chain was laid out, the flukes set in the bottom and the ship tide rode headed into the current the bunker barge began her tedious approach.
This approach, which in flat calm seas and light airs should only take 15 to 25 minutes, takes twice that here due to the poor quality of the ship handlers working these barges. Routinely the Captain will hemm and haw his little vessel and controllable pitch propeller creeping up almost parallel to the hull from a hundred yards astern and then try to get just close enough for a heaving line to be thrown in the eastern fashion; by whirling the monkey fist in a massive circle over the side of the boat and then releasing it at our heads. On one occasion I watched the bunker barge take a full two hours to get close enough so that a messenger could be passed over. Once the yelling and screaming of the bunker barge's frantic captain subsides and they're finally made fast the engineers connect a fuel hose and the Second Assistant oversees the bunkering of several thousand metric tons of heavy fuel oil. 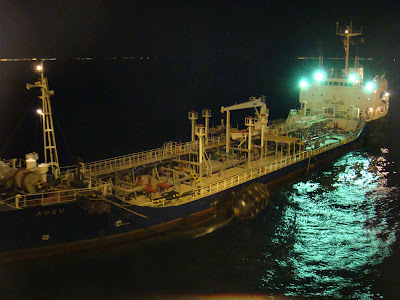 With our substantial thirst for hydrocarbons nearly satiated we began to make preparations for weighing the anchor early the next morning. While receiving the last of our fresh food and milk from a supply boat some of the crew were marveling at a dozen huge dolphin fish basking in the glow of our halogen floodlights. Among the fish circling about in search of food pale sea snakes, at least four feet long, slithered through the water. A few minutes later the eerie nocturnal scene was interrupted by a viscous brown cloud moving down the side of the ship. The presence of oil in the water to any mariner I've met is cause for grave concern and the sighting was diligently reported. Topping off was suspended and the Captain summoned.
A few minutes later my phone rang and a few more after that, hardly awake, I was peering into the darkness over the bow trying to see where the oil had originated. The Chief verified that the fuel tank levels were all around 80% and that no pressure fluctuations or burps through the tank vents had occurred. Feeling confident that the oil could not have come from us the captain on the bunker barge remarked that oil is routinely seen in the waters around Fujairah. The fuel surveyor attending the load said the shores were covered in oil and that it was probably just some ship pumping bilges or slop oil in the middle of the night at max current.
Just to be sure the captain ordered the rescue boat lowered for a hull survey. Appearing as if ready for a search and rescue mission adorned in safety harnesses, life vests and hardhats with headlamps the second mate and I un-griped the boat and had the boatswain lower us into the water. All around us the dolphin popped out of the water returning with a splash. The Chief Engineer was on the radio mischievously reminding us not to fall in and go swimming with the snakes. Though I knew he was just messing with us I was still careful not to put the sponsons down too far with a hard turn in case a coral snake did washed in.
With a strong flashlight we circled the ship and verified that there was definitely slop oil in the water but it wasn't coming from below our waterline. In the strong current it was all ready beginning to dissipate drifting down stream. This was not the first time I had seen oil pollution oil at sea, not even on this trip.
From the perspective of an American crew willfully pumping oil over the side just to save the cost of discharging it legally seems ridiculous. With so much liability in our home waters we wouldn't even contemplate such an act. Oil spills in the united states are not measured in barrels but gallons, a unit the media prefers because everyone knows what a gallon of milk looks like. Even a few table spoons of oil down the scupper from a leaking winch or a blown out hydraulic hose is a reportable quantity. Accidental discharges create a whirlwind of notifications, paperwork, questioning and statements. Intentional discharges, or even negligence brings out the handcuffs.
Yet in the middle of the night on the other side of the world with dozens of ships around who is to say you were the one that pumped the oil? And is anyone checking? Nope. I've never heard of one single port state inspection in the UAE to look over the oil record book pumping arrangement. No helicopters, no boats, no Coast Guard. Even if we had tried to report the spill there would have been no one to tell that would have done anything about it.
During out transit into Iraq we saw an even more blatant example of intentional marine pollution. With a pilot in the wheelhouse we passed by a small offshore supply vessel most likely headed for the Basra oil terminal. Just before our closest point of approach the derelict little boat began pumping it's bilge leaving a black slick of engine oil astern in broad daylight. The pilot didn't even bat and eye while the rest of us were amazed though I suppose if your former dictator lit off all the oil wells in the country causing the worst ecological disaster ever you wouldn't think much of it either. 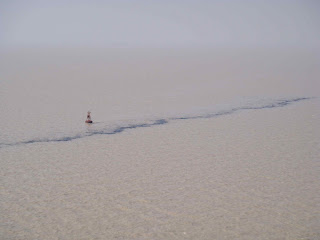 Even in Kuwait with the coal ship spewing dust all over us there wasn't so much as a boom in the water to retain the dust that was turning the harbor completely black. I couldn't even begin to imagine what it must have been like for that crew to live on such a filthy ship.
Unfortunately for the oceans in this region of the world, and for the reputation of the industry, many ships still turn a blind eye on pollution. While as a whole the affect of shipping on the seas has improved drastically in the last quarter century due to massive international regulation and enforcement some unscrupulous operators will do anything to save a buck.
Relieved by the knowledge that we wouldn't be spending Christmas in a Middle Eastern shipyard having a hull fracture ground out and welded I turned the nimble outboard around at full throttle and stopped just under the bow to check the forward draft mark. As the wake subsided lapping against the bulbous bow the second mate, standing in the front of the fast rescue boat, read the marks.

When we both looked up and saw the starry night sky blocked out by the wineglass shaped aspect of a ship head on we were equally impressed. After years of living on these behemoths growing accustomed to their size the sight from the water line was still incredible. I wanted to take a picture but lacked a camera and the skills to capture such a low light photo. The piercing stars and loom from the hundreds of ships in the anchorage would have made it great.
Turning around the second mate smiled remarking, "So this is what we look like to little boats." Yup, I thought, little boats that get too close out of their own stupidity. By the time we returned beneath the davit and retrieved the hook for recovery the dolphin had stopped jumping and no more snakes were seen.
Posted by Deep Water Sailor at 22:21