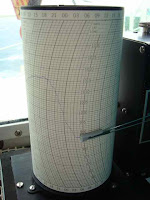 You know it’s going to be a rough morning when the water in your toilet bowel has almost been emptied by the overnight rolling. That was my first thought a few mornings ago as the ship passed from the lee of Crete and into an area of the Mediterranean where the gale force winds had enough fetch to build up a 20 foot swell. Staggering from an almost sleepless night to the bridge for my morning watch I met a fatigued captain who had been up all night trying to reduce the wracking stresses our ship was experiencing.

Heavy weather sailing is an experiment in course and engine adjustments. Big seas exert immense forces on even the largest ships affecting the six degrees of freedom a vessel afloat experiences. Heave, sway, surge, roll, pitch and yaw each describe an axis of motion on witch a ship rotates when inclined by external forces (Not to be confused with list or trim which describe static conditions affected by the movement of internal weights such as fuel, ballast or cargo). When exacerbated by heavy weather these six ranges of motion can have detrimental effects. Not only are the vessels course and speed keeping abilities deteriorated but her stability, cargo and crew become endangered as well.

With the swell on the beam and plenty of sea room to leeward the Captain decided to put the seas slightly abaft the beam and reduce the RPMs to slow ahead. The reduction in speed eased the pounding action of the bow which was reverberating down the keel and into the house shaking the entire ship like an earthquake. The course change minimized the rolling to some extent except when a larger than average wave slammed into the transom.

Because of the rolling we soon found what was and was not adequately secured on shelves and desks and counter tops. A refrigerator decided to tear loose of the bulkhead nearly flinging all it’s contents across the galley deck. The coffee station on the bridge piled itself into the sink during one large roll to starboard, a lucky thing seeing how the coffee makers and nearly full pots could have easily gone the other way spilling onto the deck and down the ladder well.

As soon as the day working ABs and Boatswain were up I had them checking cargo lashings beginning at the uppermost deck. Vertical accelerations, the kind which loosen cargo lashings and send vehicles skidding are more severe the further from the center of gravity plus most of the cargo on the upper decks was secured by web lashings which will chafe and break more easily than chain. One parted lashing was discovered just as the piece was beginning down the destructive path of damaging the eight vehicles around it. We had it chocked and re-lashed before it caused any major issues. 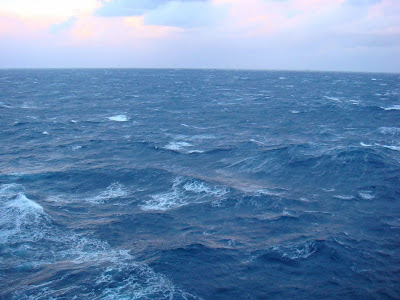 On the lower decks the heavier cargo lashed by chain was literally jumping every time the transom would take a wave sending a vertical jolt to the stern of the ship. This was a little disturbing to watch. Timing the tightening of the chain is crucial when what may have been a sedentary 60 ton piece of machinery is now flexing it’s suspension with each roll. Fingers and faces have to be clear of the lashings when the deck heaves upwards and the chains come taught. When the ship falls into the trough of the next wave the binder bar is quickly reefed on as the cargo comes back down to the deck with maximum inertia. If you time it right the chain is tightened with less effort than usual.

Once the crew had the cargo holds under control I made a round to ensure our lifeboat and rescue boat, anchors, cranes and ramps were all secured. The jostling caused one small hydraulic leak on a ramp which we discovered the following day as well as loosening the foremast stays but all this was easily corrected once the weather abated. The storm dissipated after 36 hours but it lasted long enough to wear everyone out and make the muscles in my legs sore from the constant compensation standing on a moving ship.

A run to the middle east is a blessing in the winter. The weather we normally come across is nothing compared to weather typical of runs in the winter North Pacific or winter North Atlantic. It served as a reminder how quickly your seemingly stable home can turn into a roller coaster and reinforced why I always try to get the longshoremen to put more chain on the cargo. They’re not the ones who have to risk it when a piece breaks loose.

In other news my dependence on caffeine has taken a dramatic turn for the worse. Consuming a pot of coffee before sunrise plus frequent caffeine infusions during the day with Earl Grey tea and diet coke has coincided with the rationing of our last real whole bean coffee. I have personally made matters worse by giving in to the stewards request to share some of our remaining whole beans with him since he ran out of his own stash a few days ago. Feeling sympathy for another connoisseur I relinquished an entire bag of Star Bucks Kenya Roast, spicy with hints of sweet currant, an action which was met with the full wrath of the third mate. Apparently one who loathes Folgers more than I he felt my actions were a direct assault on his situational awareness.

I didn’t really need to justify my actions though because for one the steward does a really good job of feeding us and therefore I would do anything I can for the guy and two, he’s not the mate. If a littler hypertension over the sharing of our sacred coffee is the most disgruntled the crew gets I can live with that. It would have pissed me off too which might seem irrational to people with a Dunkin Donuts or better yet, an Early Bird cafe right around the corner but for us out here we have no such luxuries. If it’s not provisioned, bought in port, locked in the slop chest or packed in your suitcase than you will go without. When the apples are eaten there are no more and when the milk goes sour you eat your cereal dry.

As a Chief Mate I worked for once told me as he was putting down a bowl of ice cream after a robust meal “Out here we can’t have any booze and no ones getting laid so besides eating there’s not much else for distraction.” Well, at least we have coffee, for now.