One of the omnipotent catch phrases you hear at work in the maritime industry is the all-encompassing “Safety First”. This idiom of our industry is often repeated in training videos, on job hazard analysis paperwork, conspicuously posted mission statements, stenciled onto coveralls and painted across the face of a thousand ship’s superstructures.

As you know the key to running a safe operation is having skilled and attentive human beings doing their jobs properly 24 hours a day. And the most effective means of ensuring those humans are prepared to fulfill their job descriptions, besides excellent compensation and benefits, is training. While compensation and benefits are arguable there is no lack of training in this industry. Despite all that training I've been noticing how us mariners can become complacent over the one thing that should keep us on our toes the most. 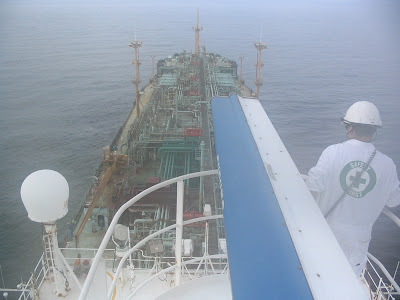 For example, today after lunch the deck department was gathered in the lounge to view a safety training video on our humongous flat screen. The video was better than average starring a few mariners in the British Isles. They reminded us through their imprudent actions not to enter a confined space without proper testing, even if your mate happens to be sprawled out at the bottom of the ladder and looking any part of unconscious.

Right, right, right I thought. I’ve been hearing this message since I was 18 years old as a freshman on a training ship. It’s now ten years later and I have safely ventilated, tested and entered numerous void spaces, ballast tanks and cargo tanks. I have filled confined space entry permits and practiced confined space rescue drills but…what about the 18 other guys in the room?

They’re from different countries and went through different maritime training institutes. They may not have had a training ship. They may not have worked on chemical tankers. They may have just moved up from being a stewards assistant to an ordinary seaman and have never entered a confined space. How do I tell? Never mind, move on. Time for the Chief Mate to read the drug and alcohol policy less we forget that you can’t step foot on board with a BAC of .04.

And that’s what we do time and time again. Rely on the movie to impart that crucial nugget of information that 99 percent of us most likely all ready know but maybe that one guy way in the back has never heard or only seen in a movie and doesn’t know why an unopened fore peak tank can asphyxiate the unwary occupant.

It would have been better if after the film the boson or a mate were tasked with explaining the particular dangers of confined spaces and how we mitigate them at sea. Maybe someone had personal experience they would have liked to share? Perhaps we could have taken the afternoon and practiced a confined space rescue and discovered first hand how hard it is to pass someone through limber holes while wearing an SCBA to reinforce prevention as the best answer to a crisis. This month the video alone will have to suffice.

After ten years of learning about and working in this industry I am beginning to see some of the chinks in the armor of a robust and effective safety culture. I for one am not perfect. I have done some stupid things (At home and at work) that could have gotten myself and once or twice someone else hurt. Yet I learned and vow to never make those same mistakes twice.

There are a few commonalities in safety training that I have seen going from ship to sail boat and back to ship lately. I’m going to share them here in order to get them off my chest and will say that I don’t have all the answers to this issue, which could fill a book the more I think about it, but I do have some ideas.

First off safety training, in particular drills, is repetitive. According to SOLAS (Safety Of Life At Sea), and not the Code of Federal Regulations because of the ships I work on, a fire and an abandon ship drill are required to be held on board once a month with all hands in attendance.

On my ship right now we do both each week, which you would think is great. Four times the training right? Not really. Rather than taking our time throughout the month to do one or the other fire, boats and maybe a security drill get thrown into the same hour between coffee and lunch each Friday. The drills are unplanned and hurried. We lower the boats quickly and safely but we do it like robots which I don’t think is the best approach.

After the drill we all pile onto the weather deck to hear about flares or fire extinguishers for the thousandth time. How many times would a seafarer with twenty years of water under the fantail have heard about the classifications of fire and why not to use CO2 anywhere but an unventilated space? I think we could do better.

Safety training is also one way. In my experience it is almost always a deck officer telling an unlicensed crew member what to do; how to don an SCBA, how to approach the fire, how to signal man overboard. And it’s almost always the deck cadet or third mate giving the SOLAS mandated safety training in first aid, the line throwing apparatus or immersion suit donning. This instruction is usually void of feedback, albeit because the crew might only be present in body and not in mind, and since questions aren’t being asked I have a hard time believing everyone knows as much about using a SART as they need to.

I can imagine how someone feels after twenty years out here doing drill after drill after drill, at least if they’ve never seen a crisis on board ship. One stack fire was enough to convince me that our whole emergency preparedness on that ship was way short of the mark. Every weakness was exposed in the first ten minutes and I thank my lucky stars that the fire was not of the serious variety.

I thought after that fire that we would revamp how we drilled, who suited up, who labeled the SOLAS approved bottles with no pressure gauges on them as empty after use. I was ready to get all training ship emergency squad gung ho over it but I didn’t. I was no longer the Cadet Chief Mate, just another second mate which meant spending the drills on the bridge with a Captain who wasn’t about to change a thing.

So what can we do as mariners if we are on a ship where training is being carried out in what I have come to view as the standard? On the personal level one can bring energy, enthusiasm, realism and personal experience. On a larger level it would take a major initiative by the company or an outside consultancy to provide better quality instruction for the crucial moments when fate hangs in the air at sea.

Why do I say a consultancy? Because we are up against some odds that are not the norm in shore based safety training. First the trainers, commonly the officers, though receiving months and months of shore based training for licensing purposes are not normally credentialed expert instructors as fire departments and rescue teams have onshore. We train a group of people who are constantly revolving between ship and shore and ship to ship. That same group of people is as varied in experience, education and skill level as you could ever find at work.

Furthermore there is very little tracking of individual skills beyond IMO mandated Basic Safety Training that is just as it sounds, basic. I haven’t been exposed to any advanced fire fighting or medical instruction since my initial certification five years ago. If you were to ask me to insert a catheter to relieve a swollen bladder I’d get it done but not without a practice run.

Being able to accurately assess and track personal knowledge about safety preparedness would be invaluable in tailoring safety training in the industry though actually doing this would be a massive feat.

Bringing a little creativity and critical thinking into the world of safety would be a good thing too. Breaking groups up to construct a fire response plan to have it critiqued by the rest of the group is a great method a co-worker here used when he was master. Giving the crew a chance to instruct in a profession where they normally do nothing but receive instruction is another innovation.

Lastly I must make the point that the last thing we mariner’s need is more shore based training. While it is an important component of maritime education today, especially in the initial stages of certification, I feel that having quality in depth training on board your own vessel is paramount. Industry will have a hard time finding people to do this job if we must spend even more of our time away from home to qualify for more certificates.

It’s high time that we get a little trickier than just ringing boats before we ring the fire drill to see if people are listening. If more can be taught than more can be expected and safety will come first instead of the alternative, which is panic.