It’s been a dull couple of weeks at work riding the port anchor in downtown Singapore. Day work is a new phenomenon for me just as working on a foreign flagged ship, having Internet access and working with a crew of more than two dozen. It would be foolish to complain though as the latest thrill has been to see how close the pilots dare bring us to the breakwater at Marina South Pier where immigration clears sailors going ashore.

The Captain’s repeated attempts at getting the pilot to place us a mere four minute launch ride from the emerald city rather than the customary fifteen has been on the return end of several trips to Sembawang. Best known for the massive shipyard and smaller American naval base Sembawang lies on the northern edge of Singapore. Fifteen miles up the Johor Strait the trip could easily be confused with going up a river if it didn’t empty out onto the other side of Singapore. 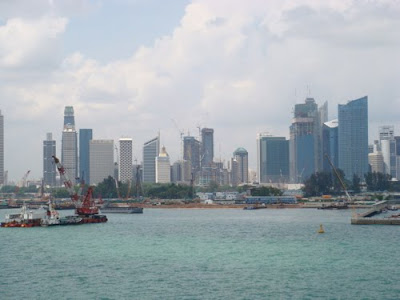 Maybe it’s poor planning but we have visited this dock three times to swap cable and a fourth time to provide tours to sixty attendees of a cable protection and policy conference. The conference ironically focused on expediting working permits for cable ships. The entire reason we had the time to steam thirty miles to give ship tours and refreshments is because we are still waiting on permits! The tours actually proved to be a good time fielding questions from government officials and cable company executives about our profession while showing off a very sophisticated lady of a ship.

Sembawang is just a little ways past Johor, one of Malaysia’s industrial centers. On either side of the strait massive oil production and storage vessels were being constructed. At Sembawang an LNG tanker was having the finishing touches put on while an American flagged Polar tanker was on the floating dry dock having her hull repainted. Right next to the cable depot at the navy base a good friend and classmate’s Lewis & Clark class MSC supply ship was docked but he was home on vacation or I would have gotten the nickel tour.

The most impressive sight was an absolutely massive 738 foot pipe laying vessel. Appended to the bow was a pipe laying stinger which almost doubled her length used to install 60 inch diameter oil and gas piping in deep water. She is dynamically positioned and berths 240 people not to mention mile and miles of pipe. Check out her website here. 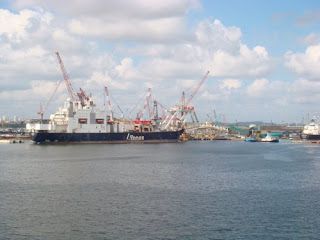 Also in the yard at Sembawang was a tanker that had been in a collision not too long ago. The collision as explained by our pilot occurred just outside the anchorage in Singapore. A bulker hit the tankers port side at the break between the cargo block and the house. The collision immediately caused an explosion that melted off the bridge wing and killed nine crew most of who were sleeping. It was a very sobering sight to look at the burnt out shell of ship which used to look just like so many you’ve slept on before. 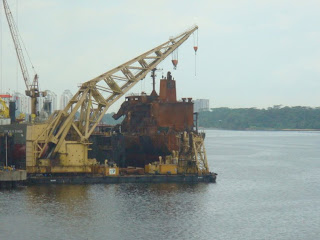 Docking on this ship is a new experience in ship handling. Unlike docking conventional single screw vessels when we come along side the Captain takes the conn from the pilot and give orders directly to the Chief Mate who handles the throttles. Rather than a propeller, rudder and maybe a bow thruster, which is what I’m accustomed to, the ship has two azimuth stern drives, and two thrusters forward. One a conventional tunnel thruster, the other a swing down azimuth Z-drive. 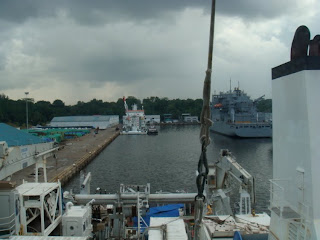 Five Rolls Royce diesel electric generators power the propeller’s rotation while hydraulic pumps control the direction of thrust. Each azimuth thruster has a 360 degree range of motion and can thrust the ship fore n aft at up to 12 knots. This makes for a very maneuverable vessel which docks independent of tug boats and given the unique propulsion arrangement exclusive of pilots inexperienced with podded propulsion. 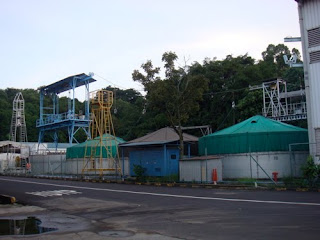 The cable depot at Sembawang is a large sheet metal building with a cable tanks on either side. The cable runs out an opening at the front of the building and supported by a high wire crosses over the road and receiving ship’s transom. As the cable is pulled by a transporter on our “cable highway” it enters one of the three circular tanks. Inside the tank a team of A.B.s constantly walk the cable in circles turning it clockwise neatly stowing it in flakes just as it’s been done for a hundred years and more. 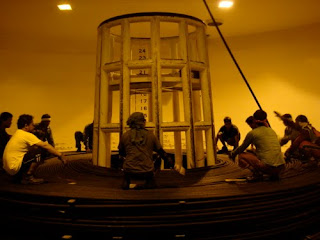 In other news I've received my Marshal Islands license which is actually an impressive little green book complete with my picture and a half dozen of my scribbled signatures. You might be wondering what I had to do to earn this additional certification? Nothing much. Just submit an application and physical, pass a drug test and viola, I'm now a Marshal Islander! We'll at least I'm entitled to sail as an officer on any ship flagged out of the remote and miniscule Marshal Islands which probably has more deck space under registry than combined land mass. And they do have a decent looking flag unlike Monrovia. 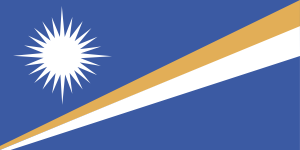