I can't remember exactly when I convinced myself that life would start to get easier once I had put some money in the bank, bought a modest apartment, and started my climb up the paper ladder. I suppose I just assumed, given my predisposition to plan things way in advance, that
all would fall into place just as I had planned for.

If there is anything I've learned this year it's that the world has little regard for even the best of my intentions. Instead of letting the unexpected get me down any more than it all ready has I'll just re-cap this roller coaster of a summer.

It all started at the Seafarers Mission in Southampton. While checking email there I agreed to do
a short fill in job on one of the schooners I had worked on board after college. This was a ship I had wanted to sail on again but had been too busy the past three years working on merchant ships, taking upgrade courses and license exams, plus maintaining a long distance relationship, to fit in sail training.

So when the opportunity arose I excitedly signed onto the schooner even though I knew that thirty days of youth education would burn me out to the max. I had just come off my regular rotation on the ro-ro and contrary to good judgment still had the knack for cramming more sea time into my off time than could possibly be good for me.

Despite some heavy weather the trip to Bermuda and back went well. Just before the end of the passage, as we made landfall off one of my favorite places in the world, I received a phone call from my employer that a practically brand new ship was going to be re-flagged from the good folks in Norway later in the summer. After being passed up for a promotion a couple of times I was now first on the list for the Chief Mates spot.

Naturally I was elated. The last three years of company loyalty and the last five of being a faithful fraternal dues paying union brother, a four thousand dollar investment (Not including the dues), was about to pay off. Besides I had gotten complacently accustomed to the not so burdensome responsibilities of second officer and was in dire need of again sailing as Chief Mate (I had all ready sailed as a fill in Chief Mate for the company in early 2008).

I packed my sea bag, took a fast rescue boat course, attended a two day security conference and took my girlfriend out to dinner to celebrate. At the security conference my colleagues and I were told about the impressive measures the company was taking with the help of a few former Navy Seals to ensure our security in the Gulf of Aden. We even got to test fire the "Weapon systems" they would be employing leaving my right shoulder badly bruised.

A week later I found out second hand that the re-flag was being shelved indefinitely for mainly economic reasons. Of course by this time I had missed my permanent rotation on my usual ship (Though I was thankful for the extra time home) and was left scrambling for a job in the worst recession my generation has ever seen.

The company tried to assuage my suffering by putting me out as a temporary second mate on the oldest ship they had which was headed for India. I turned down the chance for two back to back 25 day sea passages and was glad I did when the ship never left the dock, again due to the economy.

My next step was calling the union dispatchers who told me that despite being registered for work for over two months I was still number 39 on the hiring list. Naturally I started toying with the idea of seeking unorganized labor mainly because my chance for upward progression in the union was stifled. The two sweetest retirement deals around had just been shut down by the pension plan trustees in order to save what was left of the the once healthy pension fund. This meant that every Captain, Chief engineer, Chief Mate and First from the ages of 45 to 65 who missed the big buyout or early retirement were now going to stay at sea until all five of their kids had graduated college and the lake house was paid off.

After sending dozens of resumes, cover letters and C.V.s only three companies replied all saying the same thing; their hiring needs had been fulfilled. Realizing that I might be a long way off from a paycheck I spent a week working on a day sailing schooner. Despite the repetitiveness of hauling sail four times a day for a boat load of bored cruise whip passengers to do a two mile loop in Casco Bay it felt great to be sail and working up the calluses. Getting a wad of cash for your twelve hour day, though it barely equaled minimum wage, was a good feeling too.

A few days later I finally got a bit of work through the union. The Maritime Administration had authorized a number of "Turbo breakouts". This is when ships in the Ready Reserve Fleet are activated on short notice to test the capability of the operating companies, unions and permanent skeleton crews to staff, start and sail these "Grey Hulls" off the dock in less than 72 hours. The vessel is then put through a series of sea trials to make sure they're ready to go for the next time. The ships, which spend years being laid up in places like Charleston, Baltimore and San Francisco, ensure a surge shipping capability for the government in times of conflict or crisis.

My ship, a late 70's model Norwegian ro-ro, was berthed in downtown San Francisco and had not been underway for two years. It was only a mile seaward of the SF buoy when we had to turn around due to breakdowns in engineering. This meant the sea trials would take twice as long as expected but the work hungry crew didn't mind that at all.

After a week of lashing down loose gear for sea and throwing out garbage bags filled with expired hospital equipment I paid off and spent two days roaming the bay area. I hiked the Golden Gate bridge after breaking up with my girlfriend of four years and found irony in all the crisis hot line phones along the way discouraging people from taking the long plunge. 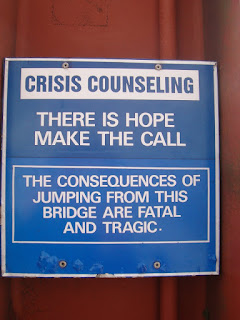 I felt like I could use some advice being five years into a career where I've stagnated without a promotion, or a job, plus ending the longest and best relationship of my life (The dog, a wife and a house in the woods seems more like a fantasy now).

Naturally assuming I was just another bankrupted businessman one step from the edge of eternity they most likely wouldn't have told me what I really needed to hear, something my younger brother would tell me a few hours later; "Suck it up man!"