I found this video on you tube and was instantly mesmerized. When I think about the size of the oceans, the complexity of the life within them and the number of people who'll never have any idea of what has lived for ages under it's surface I can't help but feel sorry for those who will never have the chance visit these fish in their natural environment.

At least there will be aquariums where people can pass by and view these creatures without getting wet and this is the most impressive I've ever seen as far as fish tanks go.

I have scuba dived with rays and schools of predatory fish but the gigantic and docile whale shark remains at the top of my bucket list. One of my earliest memories is of a photograph I used to stare at taken either by or of Jacques Cousteau. The free diver was hanging on to the fin of a a huge whale shark who was gliding just under the surface.

Below is a photograph I took off of Cape Cod in July where you can just make out the shape of a basking shark. The urge I had to jump over the gunwale and hang on to this guys dorsal fin was overwhelming but I refrained. I probably would have had a few teenagers follow me in and that wouldn't have been good. 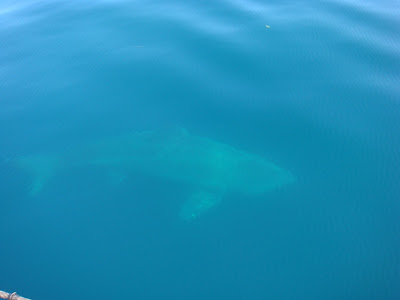