A few weeks ago while crossing the Atlantic I passed the car carrier where I lived, worked and "Cut my teeth" for the better part of three years voyaging around the world. She was built in Japan in 1978 with all the bells and whistles imaginable for a ship of her day. These included some of the first hydraulically lifted decks for cargo versatility on a ship of her size, automated tension mooring winches and stern ramp and even an taffrail speed log with an electronic repeater on the bridge. By the time I worked on her all of this equipment was defunct or on the verge of inoperable requiring endless days of stemming leaking hydraulic oil. Her hull though was constructed of thick gauged mild steel and took a thousand poundings that would have cracked the brittle steel of any modern ship but left her undaunted.

She sailed under different flags, the first and last being Norwegian and in the middle under the stars and stripes for fourteen years. She was, as far as I know, one of the first foreign flagged vessels to be registered in the U.S. to carry cargo for the Department of Defense in addition to her normal commercial trade.

This government subsidy, now known as the Maritime Security Program is touted as essential to maintaining the American flagged deep sea merchant fleet needed to support the United States during times of crisis and conflict. It provides a subsidy for foreign built hulls to be flagged in the United States is kept available to the Department of Defense and is the reason many American's have seafaring jobs retaining a small and highly skilled labor pool.

It seemed very strange to see her on the Automatic Identification System (AIS) under her original name which had been repainted on the transom the day I walked off of her. Re-crewed with a mixed nationality compliment, Indian Captain and Engineers, Phillipino Mate and deck crew, she left Abu Dhabi to fill the projected void of tonnage in the owners vast logistics network when shipping was still good.

Unfortunately for her the recession has affected the roll on/roll off markets substantially necessitating the "Cold steel" lay up of 25% of the fleet. Being one of the oldest ships in the company she was being eyed for the chopping block. After spending a month at anchor off Annapolis Maryland she finally set sail for Jordan after one last load in Dundalk.

The same week that we passed in the night, when I called her on the radio to see where they were headed next, the owners in Oslo had all ready decided her fate. Sadly for the new crew they were sending her to the far east for one last discharge after which she would meet her demise at the end of a thousand cutting torches in Shanghai, just a Yellow Sea away from where she was born.

Even in her death the vessel will probably set a profit record. Commanding day rates near those of super tankers she gained the reputation of being a money maker in her hey day of government contracts and now with her thick hull and framing she'll fetch a very good price in the scrapyards of Asia. 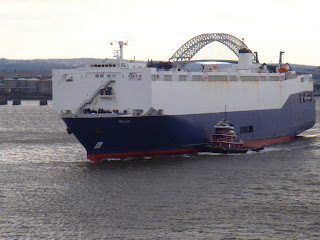 I can relate to how her crew must feel paying off an old ship knowing it's the end of her days. Once a ship has delivered you and your ship mates safely through a harrowing storm or two you begin to feel an affection as if she was a living being. In scrapping her away you can't help but feel like your loosing something more than just a vessel. Above is the old ship just passing through the Kills in January of this year. A familiar sight for the last thirty years.
Posted by Deep Water Sailor at 11:59

Email ThisBlogThis!Share to TwitterShare to FacebookShare to Pinterest
Labels: Ships