We crawled onto Georges Bank this morning, dodging fish boats with
trawls out for hours. Going 10 knots doesn't help getting past groups of
fishing boats. Instead you're a captive audience to their meandering
circles and sudden stopping to haul back gear. I was anticipating some
FM radio and my NPR fix all morning long but had to wait for most of the
day to get anything. The cell phone finally got a signal off of
Nantucket Island. We have time to kill waiting for our berth in the
morning so the Captain has us taking a dogleg up into Narraganset bay
for the evening.

I was thrilled to get my younger brother on the phone this afternoon. He
was headed down the Hudson River on a heavy lift ship bound for Norfolk
Virginia. If we were heading into New York this evening we probably
would have passed one another in the channel. He is making his first
trip as a full fledged able bodied seaman and explained to me his pains
coming up the Hudson, his first trick at the wheel with a pilot onboard.

I guess he got a little overzealous checking the swing after a turn and
the first down bound ship, swinging past his course twice getting him
removed from the helm. If it had been be I would have felt the exact
same amount of shame and embarrassment but the Captain, knowing it was
his first shot at it, put him back in as soon as the oncoming traffic
was clear. His confidence was boosted by getting a second chance and he
steered the rest of his watch flawlessly. Shortly after getting back on
the wheel the second mate pointed out the city up river, my brother's
first glimpse of Manhattan, lit up in all its grandeur, just like the
first time I saw it, from under the Verazano Bridge. It is an awesome
sight. I couldn't be happier to know he's employed and making a good
impression on his crew, not to mention headed for Rio de Janeiro again
shortly.

We had some much need distraction yesterday when a fishing boat asked us
to drastically change course to avoid the long lines he was picking up.
The Captain had earlier issued a standing order that if we saw any
schooling fish to call him so he could get his lures in. The mate let
him know that these guys were baiting sword fish and he was soon on the
radio with the boat.

The Captain soon saw the opportunity for a sword fish dinner and in no
time had us swinging a lee for the sword boat to come along side so we
could purchase some of his catch. The Captain asked for fifty pounds and
when he asked if it was fresh the Atlantic Offspring replied "Is
yesterday fresh enough for ya?" I guess it was because the captain paid
out of his own pocket.

Two young hands and a grizzly mate nimbly clambered over the wheelhouse
onto the short bow of the boat and tied two giant fish on the line I
tossed to them. We pulled up a gutted swordfish without head or fins
plus a whole Mahi with its sparkling head and fins still intact. On top
of that the boys scampered down to the deck and handed over a couple of
the swords, I guess so we could grind them up and make a soup for our
virility, not likely needed after 70 days at sea.

I carefully tide the cash the Captain had given me to a heaving line and
tossed it over in payment. The deck hands were pretty wide eyed and
didn't say a single word the whole time they were along side but the
mate was curious about where we had come from, how long our trip was,
and if the pay was good. I told him how many crew were aboard and that
the money was good enough to keep coming back. I asked where they were
out of and he said Shelburne Nova Scotia so they weren't that far away
from home. They were just ending a ten-day trip and the boat was full
and down with swordfish, something he said didn't happen often these
days. 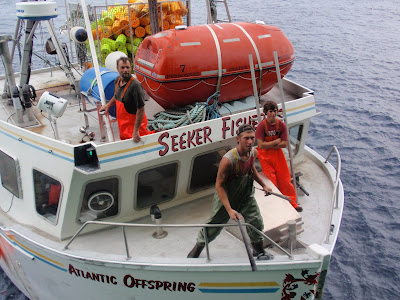 We parted ways extremely pleased to have fish onboard that hadn't been
frozen at some point in its shelf life. The guys on the Atlantic
Offspring were pleased to already have sold some of their haul and were
probably a bit awed after pulling up to a Ro/Ro out at sea after ten
days of fishing. They wanted our email address so they could send us the
pictures they had taken of the ship.

As happy as we all were, there were seven crew down at the pilot port
when we brought the fish on, the steward cussed us all out as soon as he
saw how much friggin meat we had bought for him to cook us. The Captain,
being a team player, was soon down in the galley with him hacking the
swordfish into 26 huge meaty steaks for tonight. The prospect of fresh
fish for dinner is keeping me up past my bedtime tonight.