After staying up late to eat swordfish we made New York early the following morning. I had the approach to the remnants of Ambrose Light (Now a pile of wreckage after being toppled by the bow of a tanker this past winter) and the channel up to the Verazano Bridge. I missed passing my brother's ship by just a few hours, I could see them sixty miles to the south on the AIS. The pilots boarded us from a small pilot boat which is launched from a pilot cutter just as they do in Germany. The cutter has been sitting at anchor these days with the cost of diesel, a precarious situation for a boat full of resting pilots as the north and south bound ships pass up and down either side day and night. They ask each ship for a half mile minimum CPA.

We cleared the Verazano at sunrise and docked in Bayonne for a quick discharge of only 400 cars. The dock usually called on in Newark was canceled on account of a lack of cargo. I was grateful to be headed to Baltimore, my port of discharge, as quickly as possible.

The last watch of my hitch was making the approach to Cape Henry. It was another immaculate summer morning. I slept during the daylight transit up the 150 miles of the Chesapeake Bay to Baltimore after calling my relief who unfortunately had tropical storm Fay making her way over his house in Tampa adding to my anxiety about getting home on time. 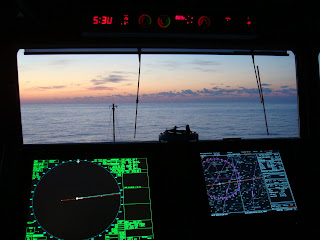 Adding on to my sleep deficit was an evening docking. Shortly thereafter I was on watch again and spent the early morning hours packing up my gear in preparation for my turnover and exodus in a short twelve hours. Cargo started at eight in the morning and for four excruciatingly long hours I watched Baltimore's finest longshoremen "Pitch and catch" plywood boxes with forklifts and trailer trucks.

My relief arrived just on time, the storm hardly impacted the Tampa area, and had all ready sailed a trip on the ship making for a simple and quick turnover. I was elated to be headed home and pleasantly surprised to find I was booked business class on a non stop to Portland (Free Heineken!).

Being discharged from a vessel, any vessel, is a wonderful experience. It's like the last day of 8th grade before summer vacation. You feel completely liberated (Despite the extreme state of exhaustion) and ready to begin the adventures you've been waiting two months for. As they say, the two best days in a sailor's life is the day he signs on the ship, leaving the worries of the world behind, and the day he signs off the ship, leaving the hardship of the sea at the side of the pier.

Now to just acclimatize myself back into society...

PS - I've got a few good pictures I'll be putting into past blogs when I have the time so have a look.
Posted by Deep Water Sailor at 15:42