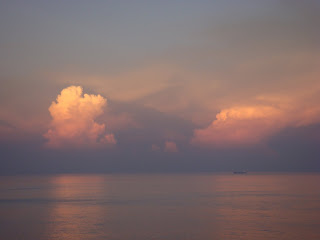 Weather is everything to a sailor. Fair winds and following seas have seen thousands of voyages through to safe conclusions while typhoons and winter gales have perilously prolonged or prematurely ended countless others. Weather at sea is the difference between the calm grace of slipping over the water towards the never ending horizon or clutching handrails at the wave's crest as the trough falls out from beneath the keel.

Save for when the wind howls the sea state is usually benign in the Middle East but the heat adds another hardship, one that I would happily trade for a few days of rolling in the North Sea. I lived on a ship where the only way to take a shower after a day’s work was to wash in the bucket you filled in your head that morning. The fresh water tanks adjacent to the hull would become so hot during the day that by evening the water was scalding. I stood bridge watches on the same ship with no AC in the wheelhouse and one little window unit to cool the 90 degree Red Sea air at midnight. Dripping sweat and charts don’t mix. The heat not only makes sleeping hard and work miserable but for a New Englander fond of changing seasons the persistence of Middle Eastern weather patterns is rather depressing.

This is why, after a month in these waters rounding the tip of India wasn’t just a physical relief but a mental lift. Still covered in a layer of brown dirt we left the Arabian Gulf and turned east for one last discharge port. From Pakistan we were ordered to the Far East which meant passing South of India and Sri Lanka and then direct to the Malacca Strait. One would think that getting closer to the equator (We’re now 90 miles north of it) would mean more heat but it’s been the opposite.

Meteorologically speaking the crossing from India to Indonesia was phenomenal. I had forgotten what the tropics were like when the weather is agreeable. The air is soft and light, the humidity comfortable and the ocean a mirror image of billowing clouds and indescribable sunsets. Just seeing clouds, endless vast arrays of them, was such a pleasant change from the daytime haze and evening murk of the Arabian Gulf.

But most delicious of all was the rain. Sweet water deluges that in two hours took care of the sand problem it would have taken the day men a week of constant pressure washing to rinse off. Every square inch of the ship was cleansed making for great painting conditions. I was thrilled not only to have saved the man hours but to see a cloudy day with no sun, cool winds and visibility inhibiting squalls. Changes in weather are so welcomed at sea where the monotony of a high pressure system, or worse, a rollicking low makes the body, eyes and mind grow weary.

The ship is in ballast which means there isn’t a single metric ton of cargo onboard and the salt water ballast tanks are full. This also means that the cargo holds, vast parking garage like chasms, are completely emptied which is the perfect state for one of my favorite pass times, organizing. Doing so in the cargo holds involves corralling the lashings, stowing them by type in metal bins and stacking those bins in strategic locations depending on what kind of cargo goes where.

Roro cargo is a beautifully efficient stowage system when it comes to anything that can be loaded onto a trailer, towed or driven onboard. Containers surely take the prize for speed of handling but there are certain things like out of gauge / over height vehicles and equipment, automobiles or very long pieces that do not fit well or weigh too much for the typically rigid limitations of a TEU; such as rail cars, yachts or heavy mining equipment.

When it comes to flexibility the roro is hard to beat but the variety of commodities mean different lashing equipment for each kind and it’s my responsibility to ensure it is inventoried, inspected and ready for use. While it’s not rocket science, nothing about sailing ever was, it is a feat in organization to have these lashings properly sorted and arranged.

There are thousands of lashing chains and binders or tensioning bars. These must be neatly stowed in lashing bins and cannot be mixed unless one wants to infuriate the longshoremen. There are web lashings, short and long, for vehicles and light cargoes including break bulk which we load quite a bit of. There are corner protectors or softeners to keep the web lashing from chaffing, web slings and chocks, both large for trailers and tractors and small ones for cars.

I have hundreds of twist locks for when we do load containers which are placed on trailers, pushed onboard by a tug, and then removed by specially designed low height forklifts to be placed on top of their designated lashing points. The twist locks secure each corner of the container to the deck or to one another as they are stacked. There are car lashings for automobiles which have their own decks higher in the ship. There's also piles and piles of rubber matting, wood dunnage, trailer jacks, trailer horses and traffic cones. Lashing bars need to be collected from the holds and stashed away for the next port, trash picked up, the holds swept and vacuumed.

My guys spent three days busting ass in the holds picking up lashings and sorting the bins. Tomorrow I'll let them know how much I appreciated their hard work by sending them back down to sweep and swab the areas our deck sweeping machine couldn't reach. And there are still light bulbs to change, bulkheads to sougee, hydraulic control stations to clean and trash to bag. It’s a ton of work but worth the effort when you have the rare chance to clean all the holds at once.

After crossing the Bay of Bengal we rounded the northern tip of Sumatra encountering the strong charted tidal rips. The Malacca Strait, a very narrow and shallow body of water, links the Indian Ocean with the South China Sea. Because of this it acts as a conduit for any tidal variations between these two large oceans and therefore strong currents surge back and forth mounding up in certain areas underwater sand waves that can reach 45 feet in height. Unlike the rips these are not charted.

Another anomoly, this one less interesting, was the amount of garbage my lookout and I saw as we entered the strait. Still out of sight of land in every direction we looked was floatsom and it's ugly relation, jetsom. Palm fronds, trunks and entire trees were plentiful but not nearly as plentiful as the plastic garbage. I truly believe plastics are the scourge of not just the ocean but the developing world. It appeared that all of this debris was yesterday's water bottle or lunch tray and no thought was given for the fact that once it was tossed into a culvert in Malaysia or off the porch in Indonesia it would spend the rest of it's days slowly deteriorating in the ocean's eco system.

There was oil too, testament that despite the international communities best efforts ship's continue to illegally pump bilges, slops and tank washings overboard. An easy thing to get away with in waters traveresed by thousands of ships each week with little to none in the way of coast guard patrols. As much as the industry has cleaned up it's act there will always be a pollution stream from shipping but I don't think it even holds a candle to what cities and run off are doing to the oceans. 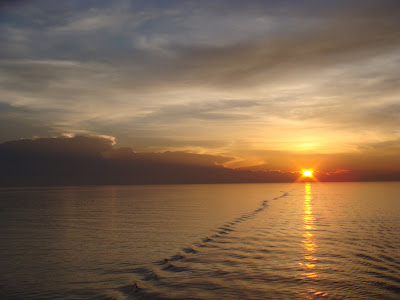 The crew is excited for our next port where everyone is hoping for some much deserved time ashore, a rare occurence for our normal run. Asia is a wonderful place to be a sailor and we happen to be pulling into one of my favorite towns so there is that added sense of familiarity, something I don’t mind half way around the world with limited time to explore as I all ready know where the cheapest beer and best food can be had.
Posted by Deep Water Sailor at 18:36