Returning to the Routine 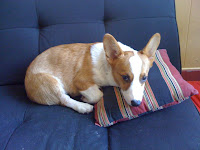 while listening to NPR, walking to the local bagel shop for breakfast, conversing with the fair proprietor while picking the fleas off her Corgi have given way to the horrendous ring of a telephone mere meters from my head at three twenty in the morning. When I was traveling in Guatemala I learned a word for this time of day; madrugada or early morning and on the four to eight watch every second of la madrugada can drag.
Each day at sea begins by mentally more than physically pulling myself out of bed, halfheartedly dragging a toothbrush across my teeth and then relying on the power of caffeine to keep me alert until the sun finally comes up sometime between six o'clock and breakfast. It's a tiring day starting so early and continuing until nine at night if I want to read or call home. My reluctance to nap doesn't help. Doing so would mean no time to write this blog or work off stress in the gym. 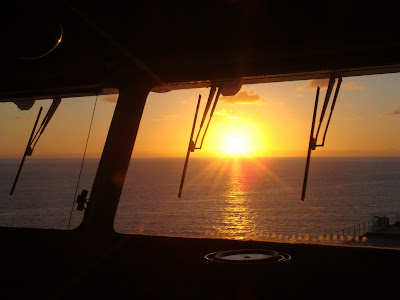 Gym time is going to have to be more of a priority this hitch than ever before. That's because the food our multi-talented steward and overqualified cook put out is unlike anything seen throughout the history of the American merchant marine. I would venture that these two men make better food than most privately owned restaurants ashore.

It is absolutely unbelievable fare, especially given the budget constraints the steward operates within and on top of pan seared scallops with rice pudding and bacon wrapped sirloin with asparagus the steward can bake like a son of a sea biscuit. Furthermore the numerous instances when a familiar face has asked me "Have a good vacation mate? Looking kinda pudgy aren't ya?" is lending me to believe I let myself go a little this last time home. I suppose a thousand bottles of Shipyard Ale and half a dozen bagels a week could do that.

On a side note the Steward told me that crew, namely the last Boatswain and another unlicensed individual of formidable beam, complained about the quality of the food. They were genuinely upset that hot dogs, grilled cheeses and fried chicken were not making a weekly appearance on the menu. After the Steward tried to explain that he uses a more expensive canola oil in the fryer rather than a blend of hydrogenated oils and that fried chicken ruins the oil he just gave up. Word is that the cook will be pulling out all the stops now that the grumblers have left and a truly supportive clientele has returned.

In addition to the incredible meals and a well appointed (And secured) gym for burning them off I'm extremely grateful for two other refreshing differences onboard. One, it's not my first trip which means all the systems my relief and I have put in place are well . . . in place. No need to organize the paint locker or corral loose lashing gear and tools, it's all ready been done. Nor do I need to create endless three ringed binders of documents, certificates and inspection records, that's all been done. Instead my time can be used more productively repairing, maintaining and improving on the systems and most importantly the ship.

The second aspect of this trip that I'm absolutely thrilled about is the fact that I have a crew. My last voyage there and back to the Middle East was greatly lacking in competent manpower. One of the watch standing "Able Bodied Seamen" refused to work overtime on account of his disdain to work for idiots, also known as mates, since he himself was about to become one and was keenly aware that he was of a seafaring caliber far above and beyond any of us officers (He claimed he was about to sit for the licensing exam and yet couldn't distinguish a pilot boat from a fishing boat day or night).

Another watch stander was certifiably nuts and earned the nickname wind talker for prolonged conversations on the bridge wing with no one else present. When he would turn to for overtime he liked to use his needle gun as a chipping hammer breaking off needles to the boatswain's dismay and was an absolute hazard with a paintbrush.

One of the dayworkers, and my best A.B., was so exhausted by a shipyard and six months onboard that he stopped working his two hours in the evening while the other watch stander was 71 and ran on a permanent slow ahead bell. Plus half way through the east bound trip the other dayman twisted his ankle and was sent home from the middle east leaving me down yet another man for at least a week.

Unlike last voyage this time around it seems that I have guys that want all the OT they can get and appear capable of the skill set expected of any seaman before the mast. Even my aforementioned elderly watch partner who has now had his 72nd birthday onboard and is still here is an incredible cleaner professing just this very morning his love of all things janitorial. He hasn't missed more than a week of overtime the whole five months he's been onboard and keeps the gym and bridge spotless.

Despite the heartache returning to sea conjures in one's personal life it would be a lie to say I wasn't a little inspired to be back at work returning to the routine of a seafaring existence. Every sense is stimulated by something here at sea which is completely unknown to land dwellers and absent from the last three months at home.

When I go to work in the morning the sky is filled with unimpeded starlight. The bridge is filled with the aroma of Folgers coffee, something that smells a million times better brewing than drinking and would never be found in my cupboards.

Everything inside the windows is dark save for the glow of two radar and a gyro repeater on the helm stand. The caterwaul of nine pin Sat-C printers screeching out the latest hurricane advisory can be heard every twenty minutes and the distant calls of a lonely Filipino bridge watch looking for someone to talk with in Tagalog comes over the VHF radio throughout the morning.

On deck the mellifluous metallic symphony of needle guns working the rust off steel blends with the constant thump thump emanating from the main engine's exhaust stack. The paint locker smells of epoxy resins and thinner where as the nearest fuel vent intoxicates the nostrils with the sweet sulphuric smell of mother earth's gunkiest oil.

During the day the smell of the next impending meal, the harbinger of rest on ship, fills the stomach with expectation. Clouds are reflected on a pristine ocean surface which hides a water column 16,000 feet deep. The bulbous bow pushes an endless bulge of clear liquid as bright blue flying fish dart for their lives across an ocean I forgot could be so easily admired. In it's seductiveness on a blue bird day the sea can almost make you feel welcomed. 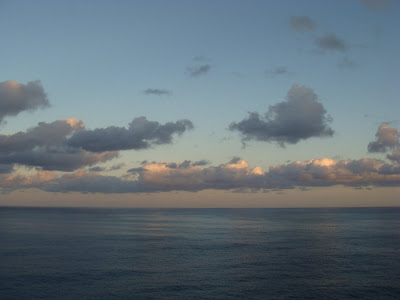