What has surprised me so much about the last two weeks living and working on “Mother” Westward is how much I have forgotten about tall ship sailing. It’s not that I have lost all of my sailing edge or the technical skills for operating a schooner though I will admit that my furls stink, my carpentry is inadequate and that my lust for saltiness has considerably subsided.
What I have forgotten is the way of life that surrounds a tall ship and the common thread that binds the people who have chosen to make sail training a substantial part of their lives.

First and foremost I forgot about being honest to god tired. Your days begin and end with the sun working until you are completely exhausted to wake after a minimal amount of sleep, hopefully six hours, to get up and do it again day after day. Especially at the onset of a program it would be impossible to find sufficient rest with so many vital evolutions learning emergency duties, safety rules and line handling.

You are always weather worn and hungry. The physicality of negotiating a rolling deck, the handling of sail and the high level of student oversight keeps you constantly on the move calling for tight muscles and depleted calories. The weather, which began cold and wet in the chilling everyone on board (As well as soaking every piece of paper and bed sheet) gave way to a beating sun and stiff wind which lips and reddened necks. Food is eaten greedily at the end of watches and apart from meal times it is in scarce supply, everything being proportioned to avoid waste and going over a tight provisioning budget. 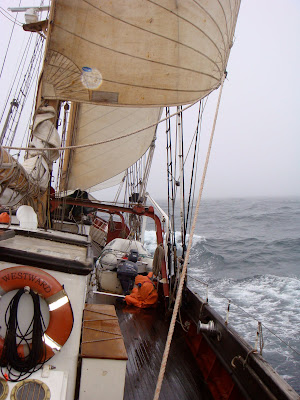 I forgot how once you are in a program; living with 24 adolescents plus 10 crew and 2 instructors confined to a length of 94 feet on deck and 22 in breadth you must remain constantly switched on setting an example for the “Studentia”. Only when out of eyesight and earshot (Normally achieved ashore) are you able to downshift and regress into a non role model status.

I also forgot how valuable a clean t-shirt becomes when you go without freshwater save for drinking and tooth brushing for weeks on end. Working, eating and sleeping in the same clothes with only a sea water bucket bath to wash away the old sun block and paint chips exudes a certain crustiness. This in turn makes some tall ship sailors yearn for shore heads and laundry machines. Now that I'm down to my last clean shirt I’ll save it for a shower in St. Georges somewhere in the near future.

The above is just a short list of the hardships endured by seafarers since bosons were wearing short pants. The discomfort and sunburns quickly fade in memory when compared to the lasting impression a tall ship voyage has on the minds of her crew, professional and trainees alike.

The biggest thing that sets apart the crew on this ship from the crews I have worked with on merchant ships is that every one on board Westward wants to be here. For every mariner on a commercial vessel who genuinely loves what he or she does there is always another one who only goes to sea for the money. Here in the tall ship world no one seems to care about the pay. Though this is surely in part since there is not much money to be made in the industry, unless of course your willing to work 11 months of the year which some gladly do.

Beyond the measly financial compensation of working in sail training the crew really understands that what they do, sailing traditional, or in Westwards case not so traditional, vessels on the high seas and fostering centuries old skills to do so is truly an incredible feat. Perhaps the lack of sustainable income explains why so many of the crew are young doing this in between the end of college and the rest of their lives but still, we all are aware how awesome the opportunity is and appreciate it.

One of the enticements for me to participate in this voyage, which had to be strong to lure me away from a quiet and comfortable vacation lounging around summertime New England, was the fact that we would be working with Outward Bound to fill the berths and focus the program. Our students, who met the entry requirements for an Outward Bound course, all chose on their own accord, at least according to their applications, to make the trip. They could have chosen to back pack in the or canoe the Allagash but preferred the idea of a deep sea passage, something none of them plus a few of our crew had ever done before.

Putting these young adults into an environment so far removed from their normal lives and comfort levels is a huge task. Making it into a positive experience from which they can draw from later in life is an accomplishment. The first phase, one that can make a watch officer nervous and also provide for entertainment is that of culture shock. On this voyage the ocean took care of it for us providing 15-foot seas and near gale force winds the first night out of Isle Au Haut in the Gulf of Maine. The amount of sick students on the leeward rail was record setting. Only three or four were unaffected by the weather, the rest being reduced to little piles of misery bundled in foul weather gear and harnessed into the main mast shrouds.

All but one student recouped in the first 24 hours, well before being out of the large ocean swells, but it took a full on 48 hours for the pale and dour faces to enliven back to their normal 16, 17 and 18 year old dispositions. This gave way to the second phase which I call training. This is where the deck hands and instructors provide a constant flow of information and influence.

Every thing the students do must be monitored. Coiling line, setting and striking sail, filling in the rough log, cleaning the soles and bowls, doing dishes. We are constantly reminding them of how important each task is. An accurate log is needed for dead reckoning, a proper ballantine is needed for striking the topsail halyards in a squall, an improperly cleaned sink gets the whole crew sick etc. etc.

Now almost ten days into the program the students know what is acceptable and what is not and it becomes necessary to distinguish between the ones who love every moment of the trip and the ones who are wishing they had done something else with their summer vacation. That’s one of the hardest parts and in my limited experience as a teacher I know it will not always be a success for each student.

We are now nearing and have been dogged with a foul wind. We’d love to go a night without the 500 horsepower Cummins but the student’s itinerary in would get cut short. Herb Hildenberg, whose “hobby” weather routing service for sailors, recommended not leaving until a stationary low blew itself out off . This ate up three entire days essentially closing our weather window. The upshot of this was getting to cruise a few of the islands that I dearly love in Penobscot Bay and dipping in 49 degree water with the students in true O.B. tradition.

As the sun was setting yesterday behind a figure head of towering cumulonimbus somewhere south of the Gulf Stream and north of the captain, one of the few people left on earth who can honestly say they’ve made their entire living under sail, asked if I would freshen the nip. Afraid that I might look like an imbecile not knowing what he meant being Chief Mate and all I had to swallow my ego and ask for clarification. He kindly told me that freshening the nip meant easing out a few inches on the working halyards and then jigging the peak blocks back up to change the line that’s in the sheaves lessening the wear and tear on the them. I still have so much to learn.

Email ThisBlogThis!Share to TwitterShare to FacebookShare to Pinterest
Labels: Sailing