I've never registered with an American Consulate prior to traveling until this last trip south. Then again I had never read as many travel advisories on an Embassy's website as I did the week before we left for Guatemala. After browsing each of the unfortunate events involving Americans there in 2008 (Which are well cataloged but short on circumstantial facts) I felt compelled to inform the American Embassy in Guatemala City that two more citizens would be joining the ranks of backpackers invading this small nation at Mexico's southern end.

One of the first travel warnings I read reported that the most common time for being robbed in Guatemala City, where the international airport is, was between 7 and 10 am when departing the airport itself. This struck me as a red flag for our personal safety since to me airports have always been secure places sanitized of the criminal elements likely to stick a knife in your face and demand all your worldly possessions which are strapped to your back.

But the report was not joking around and gave instances of taxis being hijacked on the airport access roads at gun point in the wee hours of the morning just as a van load of groggy and disoriented travelers had arrived. For this reason as we began stuffing our packs full I felt compelled to tell my girlfriend "Don't pack anything you wouldn't be able to give to a mugger without hesitation."

I made sure that anything vitally important; passport, cash, credit cards, vaccination records etc., were stashed away in our money belts and that our cell phones were also tucked away on our person. Additionally I ensured that we would have a wad of small bills at the ready for handing over if the occasion arose. We then insured that we had a reliable pickup at the airport arranged with a recommended hotel at our first destination. Even after taking all the precautions we could, like bringing disposable cameras rather than both of our digital cameras, I still left Boston wondering if we should have chosen a country a little more accustomed to protecting tourists.

After touching down on the single run way at La Aurora International we breezed through customs and were impressed by the clean new look of the terminal. Once outside instead of finding a gathering of potential pickpockets and muggers we instead found a hoard of security officers maintaining an orderly boundary between the terminal doors and awaiting taxi drivers vying for our business. We easily picked out our diver who had a sign bearing my girlfriends unique name and were soon being whisked away onto Guatemala's daring roads.

As we wound our way in a tired tourismo van through the back streets of Guatemala City I noticed the prevalence of armed security guards in front of every car dealership, grocery or hardware store and even a florist. Each store had a Guatemalan standing guard with either a large sub machine gun or more commonly a cheap looking 12 gauge shotgun.

As we made our way out of the city passing dozens of these armed men replete with bullet proof jackets and side arms is struck me that if there is one business booming in Guatemala private security is it. Unfortunately all of these guns did not make me feel any safer.

Our first destination was the city of Antigua which is ringed in hills and two immense volcanoes, one named fire and the other water, which look down from the southern side of town. Once in the small hotel we quickly divested ourselves of two overloaded back packs and headed off for the parque central but due to our keen sense of direction instead wound up in the bustling market on the northwest edge of town.

A market in Guatemala is a constant adventure. They are noisy and chaotic and filled with endless streams of people coming and going, shopping and selling, haggling and gossiping. This is where Guatemala's easily identified indigenous population, the women wearing traditional blouses and dresses, the men in cowboy boots and hats, come to take care of their shopping. Anything and everything can be found at one of these markets. Produce, clothing, DVDs, small livestock, grains, pet food, machetes, breakfast lunch and dinner are for sale. There are even t-shirts and wooden souvenirs for the extranjeros or foreigners that frequent the markets toting easily plucked wristwatches and digital cameras.

My favorite thing about these markets, or any other gathering of indigenous Guatemalans, was the rainbow of colors in the dresses and shirts which are intricately woven according the the region or town from which the Mayan descendant hails from. Adding to the variety and color were the languages spoken in the markets which are anything but Spanish. They ranged from Kaqchikel to K'iche' to Tz'utujil and are over 30 in all. Some are so localized that heading to the next town over, such as on Lake Atitlan, would require an interpreter even for a Guatemalan, so instead they resort to a more common native tongue or just plain old Espanol. This is fortunate for me because my second favorite part about the markets was getting to haggle over the price of goods in my neglected Spanish.

As we made our way out of the market clutching a camera in one hand, my spending cash in the other, I started to get the feeling that Guatemala wasn't that sinister of a place. That everyone wasn't as interested in robbing or injuring foreigners which I had presumed to be a common occurrence. Of course in cities like Antigua the government has taken great steps to ensure the safety of travelers by hiring large amounts of tourist police to be present at often visited streets and sights. But this sentiment would hold as we made our way through the country over the next 4 weeks. 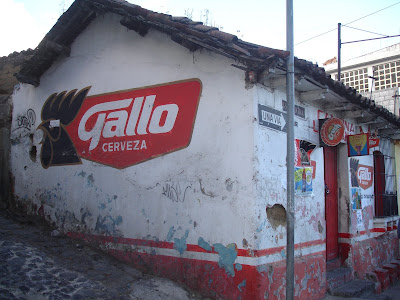 (I'll put my neck out here and say that this is one of the best beers I've ever had abroad! I believe when marketed outside Guate it's called Famosa. Give it a try.)

Our travels would take us to some of the most beautiful and interesting places I have ever visited abroad. Unfortunately there isn't a square inch of Guatemala that hasn't all ready been discovered by some adventurous visitor and there isn't a square mile of Guatemala that hasn't been littered on by the locals but the lack of real developed tourism, the kind we would later find in Costa Rica, meant that where ever we went it was very very authentic.

I can now look back at my apprehension before we left as a little too worst case scenario. Yes bad things happen to travelers but they happen all over the world and I'm sure plenty of visitors to the United States have fallen victim to crimes on some of our more unsavory streets. It seems that safety when traveling anywhere has more to do with being street smart and using your head rather than bracing for what's happened to less lucky and possibly more naive tourists in the past.

Going in groups, tucking away that wristwatch or digital camera and going where the crowds go (As long as they aren't angry ones) seemed like the best precautions we could take. Remembering that an easy target is more likely to become a victim and that not just the tourists have to live with Guatemala's epidemic of crime is important. In the end it was the very people that I was concerned about doing us harm, the Guatemalans, that ended up protecting us by offering advice, calling out scam artists and watching our backs.

It would appear that the most dangerous part of the entire trip was the three hours we spent in a chicken bus one foggy morning hammering down the mountain passes from Chichicastenango to Chemaltenango. While my girlfriend could sleep I could only clutch the seat in front of me white knuckled as I stared at the oncoming traffic cussing out the driver under my breath every time he laid on the horn and the gas at the same time.