The burnout factor was evident as I paid off the ship in Charleston. I was glad to have a flight but a little bummed that I'd be up a full 24 hours before I was able to get home and sleep off the last seventy five days at sea. This meant that I'd spend most of the ensuing weekend in a half awake state trying to figure out when I was supposed to be asleep and when I should be awake often jumping out of bed between two and three in the morning convinced that I was late for watch.

When I checked in for a US Airways flight I was disappointed to hear that all flights in the North East had been delayed at least two hours obliterating any chance at making my connection in Newark. A few minutes later I heard that a US Air flight had ditched in the Hudson River revealing what the hold up was and convincing me to give it a go the following day after a restful night in a hotel. It also meant that I could re acclimatize to existence on shore before interacting with my loved ones at home.

The first few days off the ship can be tenuous as you slowly strip off the layers of sardonic terseness replacing quick orders expecting quicker results with pleasantries and patience. This transition can be hard on those around you, especially companions who spend more time with you in a single weekend than anyone has spent near you in the last three months.

It's often hard to remember that not everything on shore has to be attended to with the expediency and diligence that matters at sea require. Shopping trips and errands don't require passage plans and job hazard analysis. Lines in stores and traffic jams cause great increases in blood pressure as I remind myself that a two minute commute at work is not the norm and that most people deal with these inconveniences everyday. Even walking to the laundromat seems like a monumental waste of time when I'm used to having industrial sized machines right down the hall 24 hours a day.

About a week or two into vacation I'm sufficiently relaxed that I can blend in with the locals and not get tweaked out by shortfalls in customer service. This vacation though I've foregone the usual week of lethargy that follows a hitch with a whirlwind tour of visiting friends and packing for a month long endeavor to Mayan country, specifically Guatemala. 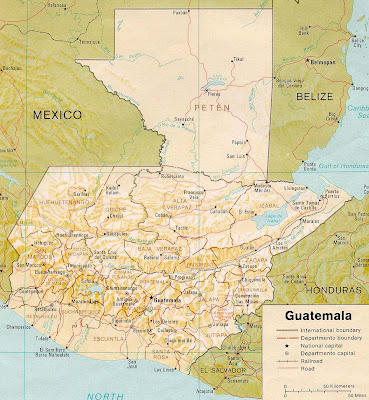