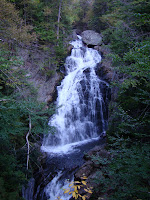 One of the most common ways I pass my time at sea is thinking about everything I'd rather be doing than standing a watch. I plan out my vacations to the minutest detail making notes on varied to do lists and setting down dates on my computer's calender. I envision travels to developing countries with weak currencies, journeys by car and bicycle around North America, diving trips in tropical waters on coral reefs and camping expeditions in my backyard.

Hiking is one of the first urges I want to fulfill when returning home. It's one of the cheapest adventures I can think of costing no more than a pair of good shoes, the gas to get to the foot of the White Mountains, and the food to fuel the trip up and down. Plus the closeness of my home to some of New England's best hiking means a simple trip without the need for tents, sleeping bags, and cook stoves.

It only took eighteen days on the beach to organize my first real hike up to the Presidential Range. Granted I've all ready chalked off white water rafting and a day trip to the lakes region this still was my first real hike of the year, its now early fall. Luckily I was able to find a friend, also an active mariner, to kill a Monday with me clambering up wet rock into the clouds. I had it in mind to go alone but in retrospect that would've been as foolish as drinking seawater in a life raft.

We made an early start and arrived at the eastern side of the Presidential range at eight o'clock sharp; the two of us being unusually punctual for being on vacation. The specter of a mountain's immense base loomed topless in front of us, the summit shrouded in a quick moving cloud bank. This did not bode well for a dry hike and good views from the top. 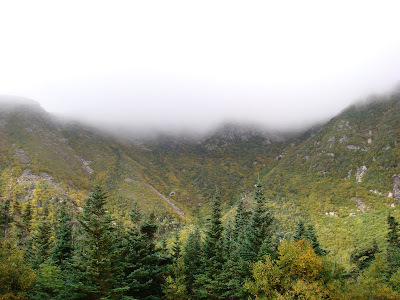 After signing in at the visitor center we started our ascent excited to have made it to the mountain in good time giving us all day to hike. We were soon over taken by a pair of forest service rangers headed up to the cabins at the bottom of Tuckerman Ravine. I blamed our short legs for the difference in stride length as to why we were so quickly passed. The first half hour of gradual wooded trail brought us to the Hermit Lake shelters where we began up the head wall of Tuckerman Ravine.

Here the trail became more vertical than horizontal and we chased the receding cloud cover up the granite cliffs.Once on top of the ridge we were socked in by a wet fog. We stayed on the most direct route to the summit following closely spaced cairns until we could hear the auto road just above us. It was strange to see the headlights of a tour van coming around the corner after spending the last two and a half hours surrounded by the solitude of nature and shrouded by fog. The last two hundred vertical feet of the four thousand we had just climbed was aided by a wooden stair case pock marked by the more daring winter climbers wearing crampons. 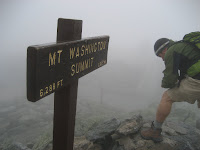 After stumbling around the several buildings on top of Mount Washington we located the summit marker at 6,288', the highest point on the east coast. We also found a shivering and soaked back packer fumbling through a wet plastic bag of trail maps. As soon as he looked at us he asked where he was. We said that he was twenty feet from the summit and that the visitor center was another fifty feet further and that he should probably head down there. His state of mild hypothermia was given away by the fact that he was sitting in a wind tunnel of 65 knot gusts with a wind chill dropping the temperature to the low 20s just ten feet from the shelter of a large stone building completely oblivious of his situation. After ensuring he was again on his way we also headed down to the visitor center to dry out, warm up and enjoy the spectacular views we couldn't see. 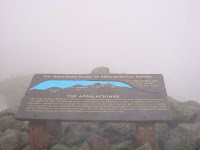 Mount Washington is renowned for having the worst weather in the world. The summit, where the highest wind gust on earth was measured, is usually shrouded in fog. The air temperature at the base, a balmy 68 degrees dropped to 40 at the top without the additional wind chill factored in. For this reason the mountain is known for claiming the lives of 140 hikers since the first recorded death in 1849. While some deaths have been are attributed to higher risk activities like rock and ice climbing or winter skiing plenty are the result of being unprepared for the exposure, even in summer months, to the high winds and low temperatures near the summit. The most recent casualty occurred this past January. 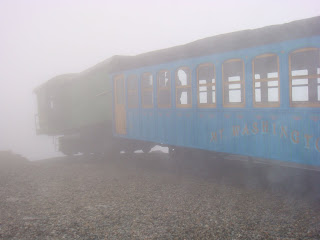 Lunch was eaten in a cafeteria crowded by not hikers but motorists who intrepidly drove the summit road in thick clouds to the top to eat gigantic whoopee pies and buy "This car climbed Mount Washington" stickers at one of the three gift shops. I wasn't really impressed by the tourist factor at the top of New England but I did enjoy the chance to dry off. If it was just the cog railroad dropping off a load of passengers as it has for over a hundred years that would be one thing, but driving? Come on...

The descent took much longer than the two and a half hours up thanks to the improved visibility. We decided to hike the western ridge as soon as we 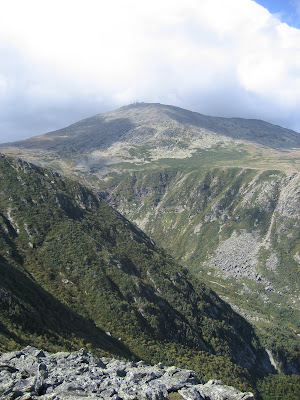 could see it. The views were absolutely stellar, especially when you turned around to see the observatory on the summit break through the clouds. The hike down gave me a good case of wooden leg syndrome which has lingered for two days after wards, helped in part by the surf lesson I took from my brother this past weekend. Despite the tender quadriceps days like this are the reason I still can justify seventy days at sea. Who really wants to sit in front of a computer when there are so many mountains to be climbed.
Posted by Deep Water Sailor at 08:50